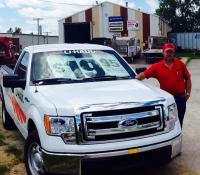 The truck we got from here was in poor operation brakes were poor and the rear end went out in the truck causing or move a 4 hour delay.

The entrance could look nicer!

The office is filthy and I wasn't able to check in on the mobile app because they wanted me to come into the office. No one except me wore a mask. Took us 40 minutes to finally get the keys and then they brought out six pads that were oil stained and full or dirt. I have pics. They didn't have the furniture dolly. On top of being sent an extra 30 miles to pick up the truck because my reservation was changed. The truck was dirty we had to use cleaning wipes to clean the steering wheel and surrounding area. If you want pictures please just send me and email I have them. I normally have excellent experiences with uhaul.

Could have explained that we were only allowed 110 miles...

There was a short in the lights and they worked on the trailer until it was determined it was my daughter's truck that was the issue. The company worked to find the problem then helped to get alk the components working so we'd have a safe trip back to Warrentin.

They were having computer issues. I didn't understand why I made my order at the Nuts and Bolts location and had to pick up at Walker Tire.

The uhaul rental process was miserable. It took over an hour to rent. When the attendant called uhaul for support on their broken website they were completely unhelpful. You need to make your process easier or provide some training.

When making the reservation, be sure that the pick up location is clear. My reservation said the pickup would be in my town, and I ended up having to pick it up 30 minutes away.

Thank you for a trouble free trailer rental. Unit was in good condition and hauled great.

I have experienced this location for other needs in the past. They are usually nice, but very un professional in their establishment. It is filthy, trashy and i often find it spills over into their work. When I went to check the trailer out, it took her forever to get the software to accept my request. The request I submitted online days prior. I did not choose this location, but was sent here after I had already submitted the request for another dealer in town. When I went to hook up the trailer, the employee tasked with check out was un trained. My truck was too tall for the Jack because the trailer was off the road in a dip. I had to provide my own procedure to get it on my truck. The employee was going to give up. Then when I got home and went to load a vehicle on the trailer, it was not properly attached by the employee. He had not latched it on my hitch. It came off, gladly not while driving nor causing any damage. I did call and inform the business, they said sorry, but not much else. Always disappointed with this establishment.

The people there seemed to be inconvenienced by the fact we wanted to rent anything. We were there for nearly an hour and I had called and confirmed the rental a day in advance. Honestly, if I hadn't been 4hrs and 30 min from home and really needed the tow dolly, I would have just walked out.

Most gracious regarding change of destination and light deficiency. Outstanding service!

No improvement required. They are a friendly and knowledgeable staff!

There was blood in the cab, a used tampon behind the drivers seat that I found when my puts spilled when I tosses it on the front seat to climb after loading my stuff. I was never notified of the change in vehicle, they changed the location to a backwood junk yard, the quoted price of $276 turned into $451 somehow. Took them 20 minutes to even get to me. The truck popped the whole time and ended up over heating. When I had the regional manager called me I was told I was lying that he was there when they cleaned the truck and it was kool-aid then later said he hadn't seen the truck but would go see it later. The truck popped loud enough the customer service lady heard it so it's on their tapes. I just asked that the adjustment to the $276 be made. He refused. I called into customer service to see if there was anyone else I could talk to, while on the phone they said he loaded notes saying he offered to match the quoted price and I refused. This is the most horrible form or customer service I've ever seen. Not only was there literally blood and a used tampon in the truck that was "just koolaid" when he'd never see the truck and admitted that later. That's risks so many contimaniation issues. I work in healthcare where people with feeding tubes get treated. If whoever bled had a disease like TB not only am I at risk of being exposed hit all my patients are now as well. I now have to get get tested for a number of things. And he's going to sit there and lie and say he offered me a price match and never did. This is the worst company I've encountered. Their only saving grace has been their customer service line. Those ladies I dealt with have been amazing. Still will never use or requimend them again

Didn't read voice mail to know where the part was

Very helpful even though the location was a dirty smoky tire shop.

THE U HAUL LOCATION RENTALS NEED TO HAVE THE ABILITY TO SCHEDULE TRUCK AVAILABILITY MORE THAN 24 HRS PRIOR. WAS VERY UNEXPECTED STRESS FOR SOMETHING I SCHEDULED A WEEK AND DID NOT EXPECT ALL THE CHANGES AND INCONVENIENCES WE EXPERIENCED.

Had a reservation for a trailer. place we were to pick it up couldnt find our name and didnt ask how to spell it. So didnt get trailer and had to find somewhere else to rent one but at full price. Was to get a discount ... not happy and very stressful day....

Very friendly, fast to get you checked in and out. Very personable people. Lots of room on their lot and is a great place to get into and out with a trailer. I'm totally satisfied so I wouldn't change a thing.

This place is filthy and disorganized. They have the usual problems with getting access to U-hauls web site to print a receipt. Takes a long time.

It was a very cluttered, dirty facility. Clerks were nice.

They did not have very many boxes when we asked for them. Plus, the windshield wipers needed to be replaced. They were in terrible condition. Thankfully, we didn't encounter any rain (even though is was in the forecast)

Clean the windshields, many bug marks were on the windshield. Also, the miles allowed were not sufficient since I had to pick up in Odessa to move my daughter from Warrensburg to Kansas City. Although it is not much I was charged for 4 miles extra for this direct trip.