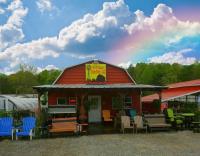 The entire staff at the all indoor farm store was super helpful and friendly. Fantastic people.

Store wasn't open when I arrived. The truck was not ready. The 24/7 process was a failure. Agreement was not thoroughly explained resulting in EXTREME overcharges. The windows were filthy in the vehicle. No walk around. But it was open on Sunday. Should have observed a day of rest and went somewhere else ANY other day.

Just moved into the area. Folks were helpful and nice.

We arrived near closing time and they were very patient and helpful.

Easy drop off with plenty of area to maneuver.

Easy, fast and friendly. I'll go back anytime I need a Uhaul

The dropoff location is a farm/feed store that deals in live animals, so customers should expect the smell that accompanies that type of business. Not a complaint at all, just full disclosure.

Location was supposed to open at 9. Scheduled the pick up for 9. Store did not open till 9:45

They were very friendly and helpful during my experience. You might check out your online system as they appeared to have trouble with your online forms during the rental process; esp. with the correct charges changing during the process. The system finally worked out in the end. It appeared to not take the inputs and they had to be entered again. Otherwise great experience.

They charged me for a safe move and safe tow and I didn't ask for either one of them so I want some one to call me and explain why this happened.

Beth Walker is an asset to the company . She is knowledgeable , friendly , and extremely helpful . I had never rented a truck before ; she helped me decide which truck to choose ( which was smaller than the one I had chosen ) and gave me advice how to pack the truck . I would go only

Very nice and friendly people at this location

We had a schedule pick up at 12:30. They were closed. We rescheduled for 1:15, they were still closed. Finally showed up at almost 1:30, made us 2 hours late on our delivery. This is twice the same thing has happened with them. Had a schedule pick up for 9am, they show d up after 10. My last time dealing with them.

Need to maintenance the truck and fix the windshield wipers..

We dropped off the truck on Monday night and there was no key drop so we had to leave the key with the truck...and they didn't process our the rental untill Wednesday...and I was charged for an extra day when it was their fault for not having a let drop

Excellent! Didn't know was going to be so helpful but went beyond my expectations.

I was transferred to this location from another as they didn't have a Uhaul available. I called the day before I was supposed to pick it up to confirm my reservation and make sure a truck was available. The lady on the phone was very nice and said she was going to add 50 miles to my rental agreement to cover the extra mileage. However when I went to pick up the truck the next day they said they had no record of my reservation and the gentleman had to spend 5-10 minutes on the phone with Uhaul trying to find out why. Thankfully, they gave me a truck that they had on site that was reserved for someone the next day (I hope they were able to get a truck for whoever this was supposed to go to). I asked if I could have the number of miles reduced that I was being charged for as I did not need to drive that far, and I was told that "miles are included". (which is not true, Uhaul charges by the mile). So I had to pay for about 60 miles that I never needed in the first place. My wife also called when I returned home to try to have the number of miles we were charged for reduced and she was told no. She also asked the person who answered if they thought it was fair for us to have to pay all this extra money (not only mileage-but also for the gas we had to use driving 30 minutes out of the way). The guy would not even admit that was unfair and would only say "I just work for Uhaul." While this may truly be out of their control, the customer service was very poor and unapologetic. And if it is out of their control, shame on Uhaul for charging customers for miles they don't use. I would encourage anyone booking a truck to look at the number of miles you are being charged for and make sure you actually need that many. If not, you will pay for them anyway. I will be looking for other moving options in the future and doubt I would ever use Uhaul again.

Truck had mud inside along with dead bugs.