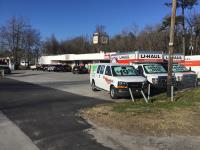 The back of the truck was full of water so I had to push all the water out and mop it before my stuff went in. It was very dirty inside the cargo area. They also didn't apply the same discount I received at another location so I ended up paying $8 less for a 16 ft truck than I did the 26 ft truck for the same time and distance. He said he didn't know how to apply the discount. I will not be using this location again.

I showed up to 2155 Credit Union Ln, North Charleston, SC 29406. Where the trailer was supposed to be but when we got there they said that someone was supposed to have contacted us that our trailer we rented had a blow out and the changed our pick up location. But we never received a call when we got to the new place we walked into the adress they gave us but there where 2 other businesses there with no signs on there place that indicates they rent u hauls. We went to the liquor store they said no that it's next door. When we go into the grocery market they had no signs were to go the front Conroe pointed to another counter and said they do there. When we got done with the paper work they stayed inside and never came and look at the trailer or helped hook up. Thankfully my brother was with us we barely were able to lift the trailer up to the hitch it was a 6x12 cargo trailer witch didn't have a crank handle and it was in the dirt. When we lifted the trailer up it ended up rolling a little bit and smacked my truck. Didn't leave any damage. When I brought the trailer back they didn't tell me we're to put it or come out to see if I needed help unloading it took me 10mins to get the trailer off my hitch and that was beacuse of how heavy the trailer is and it was just me. Other then this the price for the trailer seemed good

This location is not easily marked, there are not good directions for where to leave a U-Haul and it is not a safe area. We had issues with the app loading that prolonged our time there and were concerned about safety. Driveway is littered with glass and bottles

Didn't know I was going to be automatically charged for the mileage. Very unpleased with the amount that was charged for mileage. I will more than likely not use uhaul service again!

The people running this location didn't even speak clear English nor the they reporting accurate mileage for mile out or in therefore customers are being over charged. When trying to show the store runners the photo I just took of the dashboard showing the gas level and mileage before and after use they refused to look and told me they would enter the info themselves

Owners made errors on my receipt and windshield had cracks in it. They overcharged me

It was difficult to understand the person helping us. The location did not have clear signage.

Everything was great. Very please with the service and equipment!

Rude employees and No one was there until 1 HR after scheduled pick up time. Front end was out of Alignment.

The location was a bit scary. The cashier was unprofessional with other customers.

I had original requested Duncan Ace Hardware was my perferred pickup. The Red and white Supermarket agent didn't know how to process or speak english, we had to wait over one hour to get the truck, We had driven 8 hours. They didn't seem to want there truck to go one way . We had to add one quart of oil. For some reason my drop off date changed from original order. It took me 4 phone calls and emails to get it changed back. I shouldn't have had to call and change to my 1st location. Not sure how it was changed. They had me driving 2 hours to drop off.

Staff was very helpful. Thanks

Have a better attitude

Lights did not work on first trailer and had to change after hook up. Paper work was not changed.

Smooth and ease service for a drop off spot , customer service was very good

Make sure the door to the trailer is lubricated prior to being rented. I had to spray WD-40 on the track just to get the door to close.

They are located in a very bad area and are KNOWN as a druggie hangout. Some of employees barely speak English. This is NOT a Uhaul location at ALL. Grocery store that dabbles in it and when you call you ALWAYS get a GROCERY employee doesn't know head from hole in the wall!

The van was newer which is good, but before we left the lot it had to be cleaned out because of trash left inside. The woman who rented it to us said they have an issue with breakins at that location, so they leave the trucks unlocked(!)...and someone had been hanging out in the truck and left a bunch of trash. Gross and sketchy. She did her beat to clean it up, but should have checked it out before renting it.

Poor customer service. Wait times extreme. Running too many businesses in one location.

Truck was dirty inside and outside. Trash and crumbs were left everywhere.

He didn't even greet me when I walked in, he just said give me those keys and I'll check the truck later and have a good day! Wow! I've never experienced anything like this before ! I'll never rent from Uhaul ever again!

The attendants were rude and unhelpful, I had to complete my own hook up and safety check. The trailer was in poor shape and dirty. I got 30 miles down the road and had a flat tire waited 2 hours for a repair.

Hello- I just picked up my U-Haul at Red & White supermarket in North Charleston, sc. Parita Kakadia is who â€œassisted usâ€. I have never dealt with such rude customer service. Our pick up was supposed to be 10 am. Didn't even get to leave until 10:48am because she said she was busy with other stuff. She told us we could take our business elsewhere and I informed her we had already paid and filled out the info on line yesterday! She said she hated dealing with â€œpeople like usâ€ I guess because the color of our skin was different. She still had to put in most info acywr I had already did it online. I felt so uncomfortable and unwelcome and almost didn't even want to rent through them but we needed it today. She was literally arguing back and forth with us when my military fiancÃ© finally stepped in and said â€œma'am we don't need attitude we just want our U-Haul!â€ I am very stressed and upset with this issue. I don't even feel comfortable returning it to them. I asked her also what time did I need to have it back because the website said 3 days- but now I am hearing within the same time as I picked up the next day...this is very misleading information especially if we are returning the next day just a couple hours later... Now we still haven't hear anything from anyone after countless emails and calls and we're still charged!