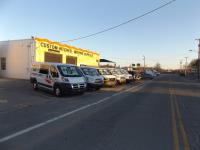 The manager of this location is a good guy. He's very kind and patient. Even though the wait time is difficult sometimes, it's always a good experience.

Robert was extremely helpful. Would recommend that someone answer the telephone locally. I rented a van which turned out to be one inch too small due to the curved top back of van (would have fit if it were straight right angles). I called the center when I was driving back & could never get anyone to answer the phone.

I did not use the Connell Highway facility, but rather u-haul at Middletown Self Storage, Middletown, RI! And, they are Excellent to say the least!

The UHaul agent who helped me was very efficient, helpful and courteous, as was the manager and another agent in the store.

I placed my order online for a 7am pickup. I waited for 30 minutes trying to contact customer service because i was told i had to wait until the place opened two hours later. When i asked customer service they said uhaul didn't have my size truck. I asked again why i didn't get an email,or phone call to cancel or recommend a different size truck she had no answer. So after waiting two hours the location opened, i explained to the gentleman my dilemma and he didn't seem to care just wanted me to slide my debit card. So i asked do i get a discount for my inconvenience he responds yes half off. After returning the vehicle i was greeted by a gentleman that checked the vehicle and i was still charged full price. After calling the gentleman i spoke to earlier, he decided after all of this i deserved a whopping 15 dollar discount. I picked 7am because the forecast said rain in the afternoon. Im surprised that this large company thats been around for years cant figure out simple customer service and logistics. With rain coming im forced to move smaller boxes in the rain because of your crappie online service. Please dont sell something as a convenience if its not possible to work out the kinks first. I will be call for a full discount after i send this.

Whatever air freshener being used was extremely strong. I understand cleaning is most important these days and I appreciate feeling safe. I opened the truck and let it air out a bit but you could taste it practically. Thank you for your help!

The associate that helped me was so RUDE. I don't like this location, everyone has seemed miserAble the 2 times I â€˜ve been there.

Nothing. The experience was just as expected.

The UHaul in Westerly RI and Newport RI were amazing. The one on Division St in Danbury is the absolute worst. Try calling them. You won't get through. I had contacted them in May and set up a truck rental. I tried reaching them throughout June and July and they don't pick up the phone, ever. I was put on hold for long, long periods. They may have gone out of business. Therefore, I transferred the rental to Westerly. They are wonderful and handled everything. The Danbury experience was horrible.

Upon dropping my rental off at the Newport RI location, I was met by the worst customer service I have ever experienced. I pulled into the drop-off area and waited approximately 5 minutes for someone to come out and â€œgreet meâ€. I was the only the customer at the location at the time and the employee came over and just said â€œback it up to the buildingâ€. In other words, there was no greeting. After backing the trailer up halfway to the building, he stopped me and shook his head in apparent disgust and began to unhook the trailer from my vehicle. I informed him that I had not swept the interior of the trailer yet. He asked if it was dirty and I replied, â€œnot reallyâ€. He replied by rolling his eyes and saying â€œwe'll take care of itâ€ with an audible sigh. At that point, another employee came out of the location and looked at the trailer and said, â€œoh greatâ€. The first employee told me that they'd email me the receipt. At this point I got in my vehicle and left, not wanting to subject my wife or myself to anymore attitude. If U-Haul does not teach their employees the importance of quality customer service in business, we will no longer be patrons. We will definitely not be going back to that location.

Price quoted was for one way usage. I estimated the miles based on the understanding that I would be charged actual or i would have taken the time to calculate actual mileage. I estimated 500 miles and I believe the actual was 460 (do not recall the exact number). when I dropped off the truck i was told the cost was fixed an I would only pay more if I exceeded the 500 miles. Other than the cost, everything went smoothly

Have somebody pleasant behind the counter . He was short and rude to the customer in front of me , behind me and also myself. I told him he was very wrong and that I and the other customers all agreed to report this guy ! He's not the normal person that works there , I hope not permanently!

All around great experience

Not the fault of the staff. However the day that I picked up the computer system was down. This impacted my 9am pick up that I had completed on-line. I was not able to get out the door until nearly 945. Additional the truck that I ended up with had a defective passenger side windshield wiper. Which of course I discovered only after needing it due to weather. It was not so much and issue with the blade, but that the entire assembly was inoperable.

When I arrived to pick up my rental the clerk at the counter was churlish and rude, demanding I walk into the store before I can get my rental although my email stated otherwise. The rental was not ready for pickup, and I had to wait half an hour before I could pick it up.

Don't use the cloying deodorant - it's way too intense (like a beer pub bathroom). There are much better and lightet ones nowadays! :-)

Increase staff and PAY THEM MORE. I will assume everyone is making at least $20 per hour. No excuses. People over profits. Treat your employees well.

The staff member in the morning (Jordan King) was very rude. I came in around 9:30 am for my 9 am reservation, he mentioned I had to have it back by 3 pm. So as I am already running late we go out to look for my rental he looks over on the side and can't find it so we go to the other side to look for my rental and he runs into someone he know, I think another employee. He decides to start having a conversation and I reminded him I only have to 3pm. With attitude he walks over to the other side and gives me the keys and says there it is, not knowing which one it is I tried the key in 3 trucks until I found the right one. I had to take a video of the exterior of the rental on my own because he just left me. Very unprofessional!!

The representatives in Newport do an excellent job!

The service attendant was very helpful and made the renting experience easy and comfortable. I highly recommend him and your facility. Thanks

Truck needed oil change per the warning light information. Not acceptable! Too expensive for a 7 hour rental.