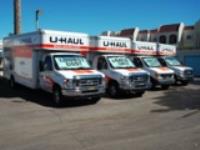 I downloaded the Ap to make it easier for me to pick up the truck. It took me 10 minutes after I'd arrived on site to complete all the procedures. I did this as an on line because I didn't want to go inside because I've been self isolating for over two months. After going through all the on line requirements, I had to go inside the store to pick up the keys to the truck. The line was at least 20 people long so I had to stand inside the store for more than 15 minutes to get to the register.

This location was having a lot of problems with their "system". I think they might need a new computer. They turned away several people with reservations despite having tons of trucks in the parking lot. They lost my reservation (or couldn't access it). After waiting for over an hour, I got the number of the person who is in charge, and he was very helpful and ultimately we were able to get the truck. The truck had a half full tank of gas and did not include the furniture pads or dolly that I reserved (and was charged for). Unfortunately, I will not rent from here in the future.

Car was dirty. I don't care as long as I don't get charged to clean it. Only issue was the wiper blades were crap and made it dangerous to drive in the rain

Representatives were friwndly and professional. Information entered online didn't appear to be available. Had to re-entered. Windshield was dirty; representative only partially cleaned it. Otherwise, vehicle was clean and well-maintained.

The floor of the truck was dirty, but aside from that it was fine. I did request and confirm a 17 foot truck for $29.95 but the day of the rental it was changed to 20 foot truck for $39.95. I let the agent know who I spoke on the phone with who said she couldn't change the amount so I followed up via message through the app and never got any response. I feel like I was tricked into spending $10 more dollars. If I was allowed to rent a 17 foot truck but then UHaul no longer had one available and had to upgrade the size, I should not have been charged more.

My only complaint is that I was given the wrong dolly

I am very offended by uhaul and it's employees, this last rental was a bad experience from start to finish.

Use the app, very efficient and fast!

Had to wait while U haul guy had to be called to check on low tires. Gas tank also showed empty.

It's a convenience/liquor store location, the only way I could tell this was the drop off location was the navigation on my phone said this was the address and there was another uhaul truck parked there.

Have truck available at closer locations. Have trucks available during the day that was reserved.

My local contract connected me to regional manager who is able to arrange the truck I wanted and have it at the location for me to pick up. I was picking it up on Mother's Day and they arranged a special time so that everybody could be with mother and I could pick up the truck. Great guy.

The clerk was well meaning but clearly unequipped for the job. Stared at the screen perplexed for minutes at a time, with people in line clearly frustrated. You need to establish some minimum ability to do the job quickly and efficiently- even if they're new or ESL.

I had a on line reservation and it took more than 30 min to locate the key for the rental. I will not ever use this location to rent a vehicle from. Additionally the truck was filthy. When I returned the truck, they wouldn't check me in and said I would have to wait until the morning. Your smart phone application is marginal at best. I will use Penske next time I need a truck .

Rental was there and ready on time .... I wish that the truck was better equipped in case if an emergency tho ...there were no jumper cables and no Jack in the truck and seems like those things should come standard in case there's a flat tire or dead battery ..just a thought

More organized and transaction could've been smoother. Cashier wasn't too confident in handling the transaction

Since I only had the truck for 3 hours I think I should have got it cheaper than I did.

They don't really understand the app or how to provide the equipment you requested. I tried to return my rental keys to the man behind the counter because I didn't see a drop box, and he insisted I needed to check out with him. I said no, the app said I was done, I know I'm done. They must be new at this.

the U haul online system was done there was only one person was dealing with store, gas and me clients, , finally he gave me truck after more than 90 with verbal approval of owner of gas station,

Had I realized how far from town this location was I would have chosen another return spot. The checkin process was very slow.

I will rent a van from Kahn again when I need to. He was very helpful efficient and fridendly. He made the move very easy for me. I will recommend his company when I hear of the need. Thank you.

Very little help, and took forever to do anything. Very poor English spoken at this location, and there is no cell service. So using the app to check in was not working. He Helped the store customers before me a bunch of times when there totals were $10-$20 and my truck rental cost $1,100. Dirty truck dust on everything dead bugs in cup holders. They had a brand new truck on the lot and he gave me this piece of garbage. after 100 miles the check engine light came on. Dropping off the truck took an hour!! Never ever ever again.