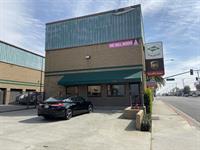 Miguel was helpful in every way. He was courteous and friendly, ncluding when I returned and he had three other customers. He seemed to handle everyone with equal ease and attention. Considering renting a space.

At both of the places I rent from the vehicles were clean on the inside but dirty on the outside.

Van was clean and well kept. Pick up/drop-off process was very easy and staff offered to stay a little past closing for me to pick up the van, which was super helpful. My only complaint would be that they are hard to get in touch with by phone. Often times went straight to voicemail, but I never got a call back, so ended up calling over and over until I reached a person. Once I was actually able to talk to someone he was very accommodating.

The front desk personnel is rude, lazy and irresponsible. They charges me for 2 day although I hold the car for 4.5 hours only. Opened case, and nobody wants to help me, they just pass me form one to another, and they don't care about business reputation at all, will never go this place again, and make sure everybody knows it!

The manager was beyond rude. After taking my credit card information he insisted that he needed to speak directly with my emergency contact. When I explained that my husband who was my contact was an attorney in court that day and without a phone he wasn't going to rent to me unless he could speak with someone. I provided another individual who he called and told them they would be responsible for thousands of dollars worth of charges if anything happened to the van. I have never heard of anyone doing this to a customer previously and I have rented from UHaul for years. I will never again. His employee apologized for the manager's boorish behavior when I returned the van and explained that he was an asshole. I believe the manager's name was Jessie and he should not be the one dealing with customers.

when reviving the vechile it wasn't clean ( dirty ion the outside , driveside had a mess ) , customer service was good , little issue with the mileage ( got corrected ) , also wish I had more tome with the vechile .

The staff was extremely helpful, fast, and efficient. We were able to move our stuff in less time than we originally planned.

the truck i reserved was already reserved for someone else, i end up having to take a much smaller truck, and instead of one trip i had to take two trips which cost me double of the milage. this is not acceptable

Your company employees are totally customer service orientated, accommodating, and do a great job of clarifying the terms and options of the truck rental process. I have used U-Haul Rental Co. before and will continue to use them whenever the need arises. Thank you.

The employee was late to open the store. It slightly delayed my move but that's the only issue I had.

It was a fairly crowded storage area but everybody there was very nice and accommodating.

Parking lot difficult to enter and exit. I didnt sign up for insurance on line. At least I didnt think so. Guy at store didnt mention so I paid extra $14.00.

It would be nice if your employees opened up on time. It seems that they work at their own accord. Apparently lacking management. I would never do business there again

Unfortunately, the employee was covering down because the original worker abruptly quit. There was a high language barrier.

The Representative was very helpful and location so close by. Thank you.

My brother was at store to take care of renting truck before the store closed. Gave credit card info. over phone. Man at store didn't write it down, so my brother called me back to give it to the man again. VERY UNPROFESSIONAL. I told my brother I was driving through heavy traffic so I will rush to store to do transaction in person, My brother called my again to say to hurry because the man told him he is closing. This was at 3:40pm, the store closes at 4pm. I'm never renting from this location again.

I returned with 1/4 tank as requested but when billed they marked less than a 1/4 I did not get my $6 credit!

Windshield on the van was filthy, and it's not apparent that facility has windshield cleaning supplies.

Cab of Truck was dirty, cigarette butts were left in the ash tray. the inside door had some sort of bubble gum stain on the handle, someone spilled coffee or soda on the back wall and it was never cleaned up. The smell from all this was a clear indication that the truck had not been cleaned in a long time.

Young man who helped was great nice clean location, but the van I rented had such a dirty windshield that I had to stop at a gas station to clean it, and I was not able to locate the Hazard button on this vans dashboard. Other than that I had a good experience.

The truck was dirty inside and outside. The thing that I didn't like the most was the inside smelt like cigarette smoke. The parking is terrible at this location.

I paid 30.37 credit and 68.?? Cash and today saw my bank account was taken another 30.37 if we have a contract you can't charge me 31$ more then what I already paid without signing or knowing anything this is bullshit.

The service was great, the worker was very helpful. Thank you!