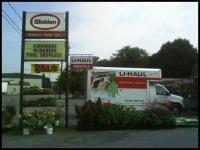 Get better customer service representatives on the phone. Both locations were of great help and managed to help me solve a huge nightmare mess but your on phone rep was rude, nasty, total disregard for me and my problem and even had the nerve to call me a liar thinking I wasn't listening. This was the worst experience I have ever had with Uhaul, and that's say something considering how often I have bad experiences with this company.

This was listed as a 24hr drop location. When I arrived, there was no sign, no drop box and it looked like they were out of business. I called the phone number for the drop location listed on my contract and received a recording that the telephone number had been disconnected. I called the main Uhaul phone number and they were no help at all. They gave me the same number on my contract. I told them it was disconnected and encouraged her to call it herself. She put me on hold as she called the number. I was on hold so long that I was transferred to the central "leave a message" line. I decided to leave the truck (locked up of course) because I did not want to incur additional mileage. I had to take off work the next day to drive back to the location, speak to someone and give them the key. They told me I should have just left the key in the unlocked truck. That would have been majorly stupid of me to do. This looked like an abandoned site, with no signs or other Uhaul truck around. I would have been liable if the truck was stolen. Horrible service from both Uhaul and this location!

The lady was incredibly easy to work with and very friendly! 10/10.

The absolute worst moving experience i have ever had. I scheduled to pick up a uhaul on sunday 5 min from my location. i show up at the scheduled time and no one is there to be found. i call customer service who stated that location doesnt even have vehicles available. why would you make it available online then?? after that she switches my reservation to a location 20 min away. i show up at that location and the rep said its going to be 45 min until someone gets here. One of my friends who offered to assist with the move could no longer do so because i didn't get the uhaul until 2 hours later than my scheduled time. I end up hurting myself trying to move a couch and ended up having to receive medical attention. To top it all off, all the rates for the uhaul any other day is $19.99 and i paid almost $100 for this absolutely terrible experience. i will be writing reviews and contacting my friends and coworkers about this terrible experience

This will be our last time renting a U-Haul truck. Our truck was not available at the location and time guaranteed, so we were directed towards another location much farther away. The location was a greenhouse business and the bed of the truck was filled with potting soil etc. The pickup location ended up being so far from our moving destination that we had to drop it off at a different U-Haul location which was closer to our new residence, costing us more money. We were lied to and given the run around about the $50 reservation guarantee also. In the end, we were charged much more than a fair price for rental, miles and had to put a lot more gas in the truck than we should have. I would not recommend U-Haul to anyone.

Location was far from my house. I went by one very near home on the way back from picking up truck and saw same vehicle in their lot. WTF. This location is no longer "paint and hardware" store. They are now located at a greenhouse/nursery operation, with no U-Haul sign in front. Hard to find.

There was no one there when I arrived, even though the sign said open 10-5, and it was 2pm. When I called it was some guys cell phone number I think, and he told me just to leave the keys in the drop and he would contact me if something was wrong. That could really be bad if someone decided to vandalize the truck between the time I left it and when he came to look at it. I just really didn't like it.

The first trailer I picked up from this location was not in operable condition. The operator of this location took the approach of 'they're supposed to check them'. The wheel bearings were shot and the trailer was missing several tie downs points. This trailer should not have been rented to anyone. We brought the trailer back and took a different one. The store itself (hardware store) is also in a state of disrepair.

Place is a dump - a mess inside and out. Had blankets outside in rain. Told him never drove a truck like this. Did not show me anything about the truck. Did not help get out of lot - blind to traffic

The location only had one person upon first visit working. Location was in the town I was starting in so that was a plus for time. I have no complain(s) on condition of the truck. I was very happy with the deal I was given requested 10' truck, was not available, and was given a 15' truck for same price as 10' for the inconvenience. Also, the truck was brand new only 3000+ miles on it. As far as the location was fine, organization of the store lacks attention extremely unorganized messy. The main one there rudely stepped away to assist another customer in the middle of our my transaction. Not enough help hired.

Everything went fine. My truck was ready when I got there.

Very satisfied and will return to this location in the future

Owner was very easy going. Thanks !

Although great customer service and a quick experience, I was given incorrect information as to where to return my truck. The establishment designated a location 2+hours from my travel location and there are no less than two dozen locations between my home and the designated drop-off location.

Explain about issue with dolly, was refunded money person even contacted location to tell them

I ordered a 17' truck and ended up with a 10' truck so ended up making two trips instead of one.

The truck was not ready when requested. When I arrived they told me they had forgotten to go get the truck. I was requested to wait about 45 minutes until they could go get it. When the truck arrived it was filthy and the back cargo space was full of dirt. I had to sweep it out before I could load my furniture and boxes.

I ended up paying $91.00 to go a total of 54 miles. And, I only had the vehicle for two and a half hours. It was a total ripoff. I will use budget or ryder next time. I will never use uhual again -thieves.

This location is absolutely filthy.