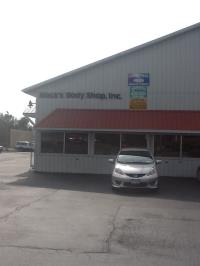 They were closed for days so they never called Uhaul to tell them that my truck had been returned wonderful.

truck had poor gas mileage (vehicle had over 90k miles)

The truck was clean but it did not handle well. There was too much play in the steering that made it very difficult to steer/handle. The exhaust was was starting to go and which made it extremely loud and difficult to hear. My son and I had to shout to hear each other. My ears rang all the next day.

We had an excellent experience picking up our truck. The staff was very friendly and helpful.

There was a bunch of space to park which made it a great spot to drop off on a Sunday and not have to drive all the way to Clyde from the Village of Newark. Number to call at drop off connected me to a customer service representative named Jamie who walked me through the whole process. I was having trouble with my phone and she stayed on the line with me until I completed the drop-off process. It made the experience that much easier because I had no idea what I was doing. Drop box was located right on the east side of the building. Awesome job! As for Macks Body Shop, they were awesome as well! After leaving the location I though that I left my car keys in the U-haul. I called the following morning before they opened and explained the situation and was assured they would take a peek for me. After showing up and walking through the door, I was greeted and everyone had masks on and there was a sign located on the front of the building as well. There was a nice little waiting area with a tv and plenty to read. Even after realizing that my key was in a box at home, I was extremely grateful for their help and concern. Would recommend for sure! Thanks again!!

It wasn't the location that was the problem- but rather your truck share 24/7 pick up process that was an awful experience.

Returning the truck was a huge ordeal. No one there to assist.

I reserved the truck online selected a dolly, was charged the rental fee for it and when I picked the truck up they did not have a dolly but I was still charged

They lied to me and didn't give me my refund. They said I went over my miles witch I did not, so I left after I looked at my paper work I realized that I didn't go over so went back up there and they told me I would get a check in the mail for my refund than they said I didn't fill the truck back up with gas so I had to call the U-Haul witch they got my refund but now I'm still waiting on the check in the mail. This place sucks and wouldn't tell anyone to go here

Trailier was dirty inside. License plate light was not working which resulted in me being stopped by Ohio state highway patrol. They never came out and went over the trailer with me. And based on Internet price, I was overcharged by three dollars.

forced to leave trailer without inspection or confirmation that no additional charges exist since clerk would not leave her seat nor make any attempt to contact another employee. Trailer could have been stolen after I left and I would have been liable. The only thing I could do to protect myself was take pictures of the trailer as I was leaving. Pathetic

Location should explain all online procedures etc to people. Nothing was advised to us how all works. For people that don't rent these often a bit of information goes a long way but appears all got done ok

Originally sched. pu of unit in Stanley,NY but then sent to Lyons,NY, increasing my mileage from home. When asked if I could drop off in Stanley was told it wound be over 118.00. Cost me almos 3 hrs extra on the road plus fuel. Not happy with that..

I'm not sure there would be anything to improve in this Instance. Everything went perfectly. I am very grateful for how quick and painless the whole thing was. Thank you very much.

nothing at this time but I believe people need to be reminded its not actual days that they have the vehicle it is actual hours.we picked up on july 1 and had to july 8th and an extra day was included but still was charged an extra day charge and was told it was because of hours over ? when we delivered it before anyone was there and was under the mileage that was allotted thank you

Nothing really. 1st time users might need a little guidance. But over all worked good.

40 minutes after getting off the phone with a very nice man at uhaul to make this reservation, I arrived to pick up the trailer at Mack's. The reservation was incorrect as I had been told that there was the option of dropping off the trailer in Leominster for a discount of $40 on the rental to which I had agreed. The agent at Mack's told me the drop off was listed as Gardner and no discount had been applied. When I asked if we could change it he said I would have to call uhaul directly and that "they do this to me all the time". I picked up the trailer and did not get a chance to call uhaul until today prior to returning the trailer. I was told that they could not honor the previous verbal offer over the phone, that it would have had to have been changed at the time of pick up and that their records showed that I had declined the offer to drop off in Leominster. Not only had I accepted the offer but I made it very clear to both the person taking the reservation and the man at Mack's that I would not be able to drop off the trailer until Monday the 4th. Not only was I charged the full price on the rental, but I was told today that there would be an additional charge for an extra day. Shame on me for not checking the dates on the paperwork but shame on you for verbally promising one thing and then failing to deliver. I am now out an additional $60 plus fees over the original agreed upon price. I will not be using uhaul again.

The only issue we had is that it did not have full tank of gas. Had to put in $25 to fill it

I waited over 30 minutes to get my truck for a scheduled pick up time.

The location I reserved 6 weeks ahead and was listed as my "preferred location" was not able to be my pick-up spot which I found out 24 hours before pick-up. Thank you to the clerk at the Victor, NY location for finding me a "new" pick-up location. I was told the "new" pick-up location would have everything available on my reservation; however, they had no packing blankets available. Thank you to the Lyons, NY location for having a truck and dolly that I could rent!

The rubbers to snub the tow chains were in need of replacement and one was missing.

This location was not open for return, so I can't say if I would recommend it to anyone.

Lousy customer service, female clerk had a nasty attitude, complained about everything, including U-Haul itself. Will never agree to go to Lyon's for pick-up or drop-off again.

I was just a little disappointed when I was called back and told the reservation I thought I had I couldn't have, but the woman on the other end of the phone was very helpful and accommodating and while I was still on the line found me another truck to meet my needs and made it very easy for me. I have been very satisfied with U-Haul's service and will definitely be calling again. Thank you.