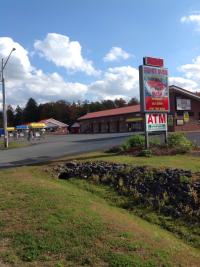 The store agent was very helpful and made the process very easy.

This is my 6th time renting from this location and everything has always been smooth. The self check in and check out is seamless. The owner is also very friendly.

Improvements are not necessary. Top quality through and through.....

The service, I'm 74 years old the worst rental experience I ever had. During my observation everyone else was going through the same thing

Was told that my 6' mower would fit. Rented the trailer and traveled 60 miles and found it would not fit. The opening is less than 6'. waste of money renting it.

Check engine light was on truck need service on the engine

I suggest picking up your truck during business hours because a few days earlier I had a reservation to get a truck after hours at a different location and the owner of the garage didn't give us our equipment that we rented. Messes up everything. Messed up our move out and in date, our time off from work and the special rate we had received. It was such a horrible experience. Customer service can not do anything to help once the business was closed. If it wasnt for the fact that U-haul was the cheapest around I'd have used someone else. When I picked up from SuperSuds during business hours everything went great. Owner was friendly and everything was ready to go.

The on the go did not work.

You couldn't supply the vehicle I booked, you delayed my day by two hours and cost me more money as people who were paid to move me had to wait the two hours too. Your system is broken as there is or seems like no penalty for people who don't return when planned that has a knock on effect to the person who is meant to get the vehicle after.

it was fast and friendly.

The folks at supersuds were super friendly and nice!

Paul is an experienced pro who was most helpful to me. He knows his business and the region like the back of his hand.

Great customer care will use this facility from now on

I ordered a truck pick from Newark to Roscoe then a drop off at Liberty, You charged me and extra 20 miles or so . Your estimate from Newark to Rosce then drop off at Liberty was off . One of your employees, Hazel called me up on Saturday and asked if I could bring back the truck early because people are hurting to move. I brought it back a day earlier on Sunday instead of Monday. And you ripped me off of an extra bull shit charge. I will not recommend you to anyone

Less of a wait

Drop off was at 8am, and no one was around, called the numbers on the office door and was told to just leave the truck and key and that's it. I would much rather have a person who can confirm the truck is in perfect condition upon returning.

I was very disappointed in my experience overall, not this specific location. I made a reservation which was confirmed and it was not honored. The truck I reserved was not available for me at the correct location or time because the person before had not returned it yet. I had to travel double the miles and leave my family behind for my move because my reservation was not honored. I won't be using U-Haul again for any move.

I was way overcharged. I will be calling customer service Monday. A two day rental for 29.99 with under five miles came to 144. +. Unreal.

Friendly. Great communications. Truck was ready and in good shape.

We had a reservation for a cargo van to be picked up using a mobile device at 7 am. The u-haul app told us we had to wait until 9 o'clock when the location opened! The cargo van was not available (even though we had to go to this location because the location closest to our home did not have cargo vans), so we had to rent a cargo truck for double the price of the cargo van. An awful experience; we will never use U-haul again!

They were veRy friendly and welcoming.