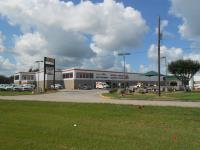 Online reservation was seamless. Pickup and return were just as easy with good safety practices in place. Would definitely recommend and will definitely be back.

My only problem was the guy that waited on me when I was leaving and the next morning was impatient and acted like he did not want to answer the question I had about the air conditioning needing some freon and about the way I return the vehicle because he was too busy.

The new vehicle issued had 151,000 miles with multiple issues. The A/C did not work, sounds like power steering was going out, the lock for the back was missing, and many more to list. However, the staff was very courteous and apologetic for issues. The staff was excellent but the equipment from UHaul was substandard.

Trailer was returned in KINGSVILLE Texas, we did not receive anything to check-in truck where we dropped it off. 2415 E. Caesar Ave. KINGSVILLE, Texas

I rented a truck 20 ft. @ LaMarque Uhaul , was told to pick it up the next day @ TEXAS City Uhaul on 9th St. @ 6pm. Arrived at 5 pm to pick up truck, Uhaul was closed, no one on site, no truck & no notice or response when I called several Uhaul office. LaMarque office didn't know what to tell me. They did not have an answer for me. Finally a scheduler called and sent me to League City Uhaul, 16 miles away. League City was very professional and appolgized for the mistakes made at LaMarque & TEXAS City Uhaul. No, I would not refer Uhaul to anyone.

Hassle free, in and out was a breeze. Thank YOU.

was miss informed about the damage protection, paid for it and did not get my items covered

Online return gets a 0.5 out of 5. Had to call next day to verify return completed correctly and I wasn't overcharged

Very pleased with the service , which is why I have rented here before and will again.

VERY easy drop off. Pulled up to drop off tent. Attendant came out immediately and began disconnecting the trailer. Said they would just e-mail the receipt. Although we never got the e-mail, I was able to go in and easily print it out from the website "previous rentals" section. Extremely please with the drop off procedure

It's been a while since I rented from U-Haul but have done so twice in the last couple of weeks. My biggest complaint and source of frustration is the current practice of cheating me out of rental hours. I'm being charged a daily rate for 24 hours of use BUT I am being forced to state how many hours I plan to use the equipment (as well as reading a "tip" that most people can do X rental in 2 hours...). If I state 24 hours then I'm only given few and terrible pick up times as options. If I state 6, 8 or less hours then the options for pick up times magically appear exponentially wider but my "daily" charge will not be prorated by choosing less that 24 hours. I get it, get more use out of the equipment by "convincing" customers to bring it back sooner but yet maintain the profit margin because the entire "daily" rate is collected. Makes sense for U-Haul but very distasteful business practice in my opinion so next time, I'm looking elsewhere.

Rather hard to judge this as my needs were basic each time I've been there and those needs were met.

Josh is RUDE and his behavior in regards to the UHUAL not having Working AC, the window not rolling up all the way, brakes making noises was unacceptable. Telling me I should have pulled over on the side of the road, got out my contract, and navigated uhual/website for roadside assistance. As if I had WIFI in the middle of nowhere? I have documented Josh's rude aggressive behavior and the total lack of customer service. I have also reported this to Jerry his supervisor who never returned my phone call or VM. I have also created a customer complaint and was given 72 hours to hear from someone at UHUAL. I do home staging and spend thousands of dollars on UHUAL each year. This experience has not only completely turned me off from UHUAL, I will make sure to share with my SOI and Real Estate / Realtors / Clients my story so they don't have to be put in a situation like this. I did my best to return the UHUAL at 7:15 pm, checked it online and thought that is all I needed to do. Josh charged me a late fee was once again extremely rude and not helpful. He outright accused me of purposefully not seeing the uhual dropbox which I did not. He even said he looked on cameras to see if I walked or drove past the uhual dropbox. (Who does that)? It's one thing to have a bad day, it's another to be an outright asshole which Josh was. It was dark out, I am a woman and I was afraid to wander around a dark parking lot. Josh also said a trailer was stolen that same night, proving the parking lot where I dropped the uhual off was not well lit or safe. If Josh represented my name brand or company I would terminate him immediately. He is completely irresponsible and RUDE. I have filed a complaint the BBB and as I mentioned above with UHUAL corporate. No person should be treated this way, Josh accused me of lying about the AC, lied and said he check it and it worked. I have my Mother, Assistant, Husband and Movers to prove otherwise. What General Manager accuses a customer of lying? This is both pathetic and unacceptable!!! I expect to hear from corporate about this. I am also sending my story to Chanel 11 news to save another customer from this awful experience. Jill Abel

everyone did a great job

I asked about what was needed to drop off the truck should I arrive after hours and was not informed that I needed to check it in on my phone else I would be charged a $20 fee.

Make sure that the "full gas tank" is actually full. I drove 21 miles and averaged 5.5 miles per gallon on a pickup truck, when I went to fill it up upon return. Either this pickup truck gets the worse mileage in the world or it didn't have a "full tank" when I picked it up. A small, but annoying issue.

The bigger UHaul locations have everything you need to move, store, whatever.

Nothing, it was quick and easy.