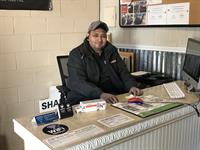 Drop off place was closed. I called a posted number and explained the filthy floorboard and dropped keys in drop box.

Truck was fine, but when I went to pick it up on Sunday, it was blocked in by another truck. I'd reserved 12 mats, but they were piled outside - 5 were dry and the rest were wet. Fortunately, I only needed 5 mats for what we were moving. I had trouble with the UHaul mobile app - it thought I was picking up the truck on January 1, 1753. When that got sorted out - thank you, CS & Traffic - I paid via my saved card info - and the app took that, but told me to pay again. Once CS saw the payment actually went through, I canceled, and Traffic got me the 4-digit code to unlock the key box. After all that, no problems.

This will be the first place I check next time I need a truck or trailer. The back drive could use some gravel, but it was easy to get in and out.

THIS IS THE HARDEST LOCATION TO FIND, ESPECIALLY IN THE DARK. SMALL SIGN ON THE FRONT LAWN, HARD TO LOCATE

Unfortunately there was feces in the inside corner of the trailer close to where the door closes. I cleaned up the mess and packed my things. Other than that, Uhaul reps on both sides of the trip were very courteous. Trailer was secure with no structural problems at all.

No one at site during business hours, nor did anyone answer call using posted number. Other than a couple of small u haul signs you barely believe it was a return location.

Not much to improve. System is setup in customer-friendly way. Leroy was extremely helpful & engaging & made the process simple for me.

It was very hard to find this location and trying to park the truck with no where to park.

My truck, price and location changed 3 times. Consistent information would be an improvement.

Although the Owner assisted me on the phone as nobody was present at the facility, I had to get the dolly ,keys , etc. The Inside of the Truck was absolutely disgusting, I brought Cleaning wipes as a precaution and cleaned the entire cab. There was no windshield Fluid and the windshield was full of bugs, I washed the exterior of the truck .

Easy to find, easy to maneuver trailer into a parking spot. Very pleasant people to converse with even prior dropping off trailer.

Nothing, they were wonderful and kind.

It was confusing where to leave vehicle

The guy who ran the place was kind and friendly and made checking out a breeze. The fuel level was incorrect and he fixed it for me without asking and sent me records because the auto check in thing wasnt working properly.

Better signage on the street and at location. We got there and could not identify where the office was.We called location and someone came out in about 5 minutes. if there is not an attendant perhaps a sign with instructions to call the number so the costumer doesn't have to wonder around trying to figure out how to obtain service.

Customer service was very good but the facility is sorely lacking. The actual office/shack is not in the location indicated and signs have not been put up yet. Wiring on the dolly was a mess.

I contacted UHaul the morning of 9/2/19 to make sure this location would be open at 8am due to the holiday. It did not show as being closed on a holiday schedule. I arrived and two men were outside moving another UHaul. I told them I was returning my rental and one man took my key and said okay he will send you an email with your receipt. That was it. They were the only ones there as far as I saw and said the owner was not there and I stated I was worried my rental would not be marked returned for that day. They called the owner, spoke in spanish which I do not understand and then told me he said it would be returned as on time and it was okay. I did not feel comfortable leaving my rental and called multiple times from the time I left this location to let you know it had been returned all the way til Wednesday, 9/4. As of the early afternoon on 9/3/19, it still had not been marked returned and the clerk tried to contact them and was not able to get anyone at this location. She said that she would make a note and keep trying to get in touch with them. It showed returned on Wednesday when I called and I asked why my card had not been ran for the additional day. She said it appeared that I wasn't being charged. I never did receive a return receipt which I was told I would receive when this location returned my rental. Now two weeks later without a warning or given an advance as to when my account would be charged, I get a bill emailed and my account charged. I was no prepared for these charges and my account will now be overdrawn do to a BILL pending to post to my account. I now have no money to use for my expenses (gas, food, etc) for the week. UHaul needs to change this policy and give your customers and few days in advance to ensure they have time to make sure their account is ready for these charges. I will use UHaul again but I will not use the return location, nor recommend it and I will not give out my personal checking account card again.

Please get the tires balanced on these trailers. The one I rented shook so bad between about 48 to 55 m.p.h. I thought something was wrong with my yow vehicle. At speed above or below these numbers it pulled fine. This is why I know it is a tire balance problem.

First, there is no U-Haul sign visible from the street, so I had to drive around the block twice before I found it. Once in the lot there's no indication of where the office is. The only door marked "U-Haul" was locked. No one ever appeared, I had to phone them and was just told to unhook the trailer and leave it. I felt very unwelcome and uncomfortable.

I liked the idea of express check in however when I got to facility the truck was blocked in I could not move truck until a worker came to move it 45 minutes after I arrived. I had movers scheduled at 10am and they were on time and had to pay them extra.

Scheduled online. I elected to opt out of the special coverage however I was still charged coverage, disputed the charge, was reimburse but I still think it was a problem because I was being charged for something I refused. Customer Service was good to fix the issue.