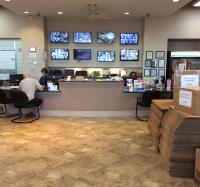 I was racially profiled and met with hostile service. I wouldn't recommend this location. I will call corporate to have human services retrain employees. Poor service.

Nothing everything was absolutely wonderful the lady was very nice

Truck was not ready when I got to the location. There was not enough personal, only one lady thats was very busy at the moment. There were not blankets available that I had requested.

The staff there are efficient and friendly. I'll be back to this location. Thanks.

CUSTOMER SERVICE WAS AWFUL! Elder lady was on the phone the whole time I was trying to return the van, instructed me to download the app and return the vehicle through there while others they were just tossing the van keys to her. Wanted to rent me the van for only two hours, had extra restrictions that were not imposed in other customers of calling two contacts on the spot (one customer walked in after me and he was only asked to provide a phone with no calling requirements). No greetings in or out just terrible. Elder lady claims her name is Patty.

When I arrived, the cargo van I had reserved had already been rented to another customer earlier that day. There was another cargo van available, but it took two employees about 45 minutes to switch me over from the van they rented out to someone else to a new one. The van was not clean on the inside, but there were signs all over the store telling me that if I didn't sweep out the van before returning, I would be charged. I would not recommend this location again.

Truck was unsafe and improperly maintained and staff was extremely unhelpful and rude concerning the matter.

Both Patty and Keshia were exceptionally helpful. Your on site check-in procedures are cumbersome if not impractical. The requirement to have your team personally engage with two of my contacts came as quite a shock, especially since this was not mentioned in my online pre-registration. How do people who are new to town--with no local contacts--meet this requirement? And what if my contacts had not been readily available? Also your exterior signage at this location lacks drama. The "COMMUNITY" sign overpowers the modest U-Haul signage. Hard to see and discern from the street. If it weren't for the branded trucks parked under the driveway, I would have driven right by. And I'm a native Houstonian.

The online app was an absolute disaster, I do not know why you cannot check people in by customer service at the location - to be fair she was helpful in helping me through the app, but it toke 1 hour 20 minutes to check in! The return was not great using the app also...trying to park at this location on return is hard also, very tight and a safety issue, fortunately the same lady let me park in front of the store.

The staff was friendly and helpful.

Once I got past all the questions and pictures required for using the App, it is really a pretty good process for a contactless process. Now that I understand it, I will use it again. The trucks are good and clean too.

I felt that the trucks cargo area wasn't well cleaned before me. However, the customer service representative was absolutely amazing and made the whole pickup process so easy!

I have rented numerous times. I have never had this much difficulty or dealt with such rudeness ever.

you all did a good job ,thank you

Services were on from the beginning, floor was filthy. Customer service was horrid. And the check in process for app was slow and complicated. Over priced will be may concern for why I used.

Great experience overall! Easier than I anticipated and I enjoyed how quick and efficient the employee who helped me was.

The truck I rented was not available. I was given an alternative, larger truck for no extra charge (which I appreciated). I rented a dolly as well and I was told by the employees the dolly was at the location. However, when I went into the truck there was no dolly and the location did not have another dolly. I was forced to rent a furniture mover instead, not from Uhaul, but from the storage complex I picked up the Uhaul from for an extra charge. One of the employees at the location was decent to work with, but the other was generally sarcastic and rude and made it feel like the location's inability to give me what I already ordered and paid for was an inconvenience to them, not me. Overall I ended up spending >1 hour in the store even though it should have taken less than 5 minutes.

Customer service was terrible here. We rented our vehicle and confirmed pickup time verbally with the front desk, and asked some questions about drop off. On the day of the appointment, we were told our reservation was double booked and there were only 2 box trucks at this location in total, none of which were available. We then had to scramble to find another vehicle, but tried again after calling U-Haul support and confirming our reservation was in the system. When we called again there was another woman who answered and said our vehicle was available. When we got there, there were 5 box trucks parked in front of their storage facility, and we were able to get ours. When we asked again about drop off terms, we were given a different answer than we were told at the time of booking and had to pay for an extra day because of this. We also heard the desk agent take a call while helping us, which I distinctly heard her tell them they had no trucks available, then upon hanging up she told us that she did have them, but she was trying to finish our transaction first. This was the same woman that told us earlier in the day that we were double booked and had no truck available. Only reason she didn't recognize our name is because we checked in with my name as the driver, instead of my fiancÃ©e who did the booking. We've never had bad experiences with other locations, but this was unacceptable. We paid for the extra day instead of figuring out a way to return it on time, because I just wanted to be done dealing with this woman and make sure we had the vehicle for our scheduled move.

This is the first time in my many years of UHaul experience where uHaul was unable to provide the truck I reserved. The report was that my 6:30am mobile pick up Was Unavailable and required hand delivery when the store opened at 10am. The truck was sitting on the lot. Phone conversation with UHaul was not helpful. The rep that helped me when I arrived at 10 was very apologetic and tried to be as accommodating as possible. I lost my scheduled movers, my unloading scheduled parking time slot, etc. in the end I was able to work things out. Lots of time wasted. UHaul offered no apologies. The whole world is stressed out it seems so God bless and stay safe. I'm sure it will be better next time.

The staff was friendly and attentive.The truck was really dirty, but in fairness it was raining that day and might have added to that.

Everything went well, clean van & no issues. My daughter has too much stuff but that's not your issue haha. Would use y'all again! Thanks! RR

Very poor customer service. They wanted me to only use the app for picking up and returning the vehicle. They did not want to help or interact at all when I explicitly requested customer counter service in my reservation. They became visibly annoyed when I asked for assistance.

Nothing. The process was easy and quick.

We have been waiting for almost one week to see what the status of our requested refund is. The Uhaul we rented was not safe to drive. I called Roadside Service to check the UHaul and they indicated that there was no transmission fluid, low oil, no grease in the underbelly, alignment issues, problems with the brakes, etc. The UHaul location we rented the truck from stated that they would have to inspect it and make a decision. I have not heard back from anyone. Additionally, the truck originally had the wrong mileage (which we pointed out when we checked it out at pick up) and has clearly not been serviced in quite some time. I live near the storage facility and can see that one week later the truck hasn't been moved...so I've been charged and no one is inspecting the truck (which was apparently the condition upon which they would even consider refunding us). I was told by the storage facility that only Roadside Assistance could get us a replacement truck. Roadside Assistance told me that only the storage facility could get a replacement. So I was stuck with a non-Maintenanced, un-safe truck and still no one has reached out to let me know what the status is/what the manager indicated about our refund.