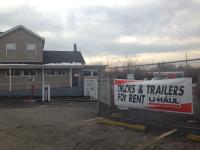 To me u guys a doing a great job

The contracted locations that are suppose to be more convenient are a joke. Keys not in lock box or given wrong codes. For us we were given no drop off address! Had to make several phone calls, talk to 4 people at customer service to get location

I forget her name, but the young lady at the desk today was awesome to work with. There were cards on the counter that said Nicki, however she was not who we worked with. The young lady that was there was very professional and knew exactly how to get things done fast and convenient.. My family and I really appreciate the availability of the UHAUL truck. Helped get this done a lot quicker. Will definitely recommend to family and friends. Thanks again.

We found damage on the truck that was not marked and walk back inside to tell them but they said we had taken the best insurance and it would not matter so they did not need to look at it. Did the rest using the app to pick up the truck which stalled and stopped right in the middle of the pick up and had to restart it also not a good experience.

Give box number that is accurate for truck share.

The equipment was accurate and in good shape, but the location forgot to put the moving pads I rented in the truck, so I had to call customer service and go to another location to get the pads. Uhaul was great about it and they credited my account and sent me a VIP coupon.

They charge you way more then what's on your receipt and they charge you for cleaning even though you cleaned up the truck an gave it back exactly how you got it .... WHAT A RIP OFF !!!!! I would never get a truck from here again

A couple issues with the renting location but the main problem was the rate was higher than I was quoted and the alternate drop-off location that I selected to obtain a discount was not available to the renting agent when I picked up. I also realized the next day when we were loading that I had paid for 2 dozen pads and was only given 2 bundles which only had 6 pads in each. The trailer states it is not waterproof but we had a lot of water coming in from the roof so I bought a large tarp to put over it while loading and overnight. Luckily it was not raining the day we drove. I went through the e press set up but it still took 30 minutes to complete the process

Tammy was at the desk in the location when I arrived. She was extremely helpful and very friendly. She helped to make the Uhaul experience less stressful, smooth, and quick.

Only issue i have is not with people there they were very nice. Issues were 1. The online form we sent in were supposed to have appliance dolly with rental it did not only regular dolly, was told i could cut the tag and use the regular dolly and would not be charged seeing they did not have the appliance dolly as requested in the online form/contract. I was not charged this on final bill. 2. On the final bill I was however charged for the bag of pads that wer did not use, the security tag was still inplace when returned. I was charged $15.00 for this & is not a valid/fair charge. I will be following up with rental location on this on Monday. 3. Truck was used as a locker for all of garage due to garage floor being coated and was easier to store the garage contents and keep secure in driveway. Truck was rented from a local location so truck was driven 4 miles from rental to home then 2 days later 4 miles back. And was charged $9.35 for 2.2 gallons of fuel..... The 15' trucks should at least get 10-12 MPG so was overbilled there not much but still... Overbilled by at least $4.70 on that as well. 4. Billed for an enviormental fee of $3.00...... I will be seeking a $20.00 credit from rental location as I feel the pad charge and fulecharge us not fair in anyway. Seeing we did NOT use the pads and truck was driven 8 miles...

There was a lack of documentation that we were suppose to receive but never got. We also never were informed by them when our drop off time was so we got charged for an extra day. Just was a lack of information.

The lady in the office was very friendly and helpful

was charged a whole day rate for being late..made me say WAIT....WHY CAN'T YOU PRORATE ????

We originally were booked at a different location but was changed to here. Girl was less than helpful didn't set us up with the correct drop off location because she couldn't find it and we were charged $11 more than the 1st contract. Then trailer didn't have electrical hookup so my husband had to go back to where we had scheduled the rental and get the connector. They were super helpful but the girl at Secure Ez didn't have a clue. It was the only piece of Uhaul equipment on the property.... you might want to drop them as a dealer! Also the trailer leaked. We ran into a torrential downpour about an hour from our destination so we unloaded immediately and discovered some boxes were wet but nothing was damaged. Reported this to drop off location.

Brian Aker (Ronald B Aker) either does not understand the U-Haul system or does not understand the U-Haul policy. Brian's explanation to me was a valid credit card was required on the front end of the reservation, however actual charges would be finalized at return. Additionally, Brian's recommendation was if estimated miles may prove short, it is better to add additional estimated miles up front, rather than be charged overage mileage upon return. And again, actual mileage and charges would be determined at return. Instead as it turns out, Brian did not use my credit as a valid hold, but rather charged my credit card upfront, after which the return location could not adjust. Because I did increase estimated mileage upfront with the full expectation of receiving a credit upon return for unused mileage, this results in additional charges to me of $175 = $1553 (includes additional mileage estimate) - $1378 (original booking charges). Please respond with how to resolve this mistake.

I was very unhappy with the services provided by uhaul. I had a flat I called 2 times and and explained my situation I was already stressed with the move and my flat tire. The uhaul I had reserved for 3 weeks was given away. I had to drive 30 mins to get another uhaul which the lady said it was only 7 mins away. That put me way behind on my moving schedule then I wound up losing a bunch of my stuff because I couldn't get it all. I lost $300 of stuff if not more. I will NOT use uhaul again I will go somewhere else this was ridiculous. Then I went to take the uhaul back and the place was closed so I had to take it somewhere else and drop it off. I even put extra gas on the uhaul. If there is anyway I would like some of my money back for the headache that was caused my bank account has been closed from moving out of town. Please send the refund check to 3664 state route 49 Arcanum Ohio 45304

I'm highly upset I have no clue what the $14.00 safe coverage fee is? I have my own insurance and I was not made aware of the charge during my phone call or signing the paperwork and I did put a gallon of gas in the truck. I googled it and it said it gets about 13 miles per gallon. Well I only went 18 miles so maybe I should have put 1.5 gallons but not 2 and gas is definently not that ridiculous so that was absurd. I paid over $60 for something I expected to pay $42 max.. I will not recommend U-haul to anyone if I don't receive some type of credit for miscommunication on this $14 fee or the fact that I put a gallon in but you say it needed 2 whole gallons

The original location for my rental pick up was "oversold" and did not have a truck for me when I arrived. They sent me to the above location which had a truck available. The whole process to finally get a truck took 2 hours.