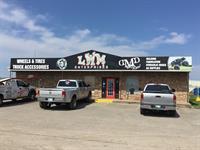 the owner of the shop made sure everything was taken care of. made everything easy as possible

Door to truck did not open. Had to pick up another at a different location

Very user friendly. LWM was great to work with during the entire process. Thanks.

I was originally supposed to drop the trailer off at 501 24th Ave NW however the owner/operator was nowhere to be found all weekend and was not answering the phone or returning phone calls. I was stuck with a loaded trailer for two extra days because of this and now U Haul is attempting to charge ME for MY inconvenience. Not happy at all!

my first time towing a car. it worked great

The manager at this store went above and beyond to help me! Very professional and has a huge heart!

Jaime the manager of the store went above and beyond to help my situation! I desperately needed to add a 12' trailer at the last minute to get all of our items in. He made everything happen immediately and also helped me load some of our stuff in the trailer on his off time. I applaud his professionalism and his heart!

The owner was brusque and dismissing. He was condescending and doubted I was scheduled to drop the truck off at his location until I showed him the website, then he scoffed and walked away. He carefully inspected the inside of the truck, which I had swept out, looking for I don't know what. He asked if I had my contract but didn't explain that he needed it to check the fuel level and then charged me almost $50 even after I replaced the fuel I had used based on the truck getting 10 mpg as posted on the website. I was given no receipt nor thanked for my business. The overall rental experience was horrible apart from the few minutes with the manager at the pick-up location. The initial reservation was poorly handled and required two cancellations and several lost work hours. Customer service agent Debra from Brooklyn was the only helpful person who ensured I had a truck more than 12 hours later than scheduled despite talking to several other agents. I hope you will find the recordings as I was told the calls were recorded. The upside that my house has been moved does not mitigate the experience as miserable and a poor reflection on this company.

The signage was hard to see when I was using my GPS. Didn't know where we were going until after we passed the entrance, and then we had to find somewhere to turn around the truck. Staff were in back and did not seem to want to be bothered with us dropping off the truck. I'll check other u-haul locations first if I need to rent another truck.

Jamie was very helpful & made it a good experience.

The uhaul was not swept out. Guy was very friendly and pleasant. I was told over phone when I ordered the uhaul what the total price would be (I even asked to verify that it included all fees and everything) but then when I went to location to pick it up the cost was over $100 more than what I was told over the phone. That was not a nice surprise. But I think that was an issue on the end of the person I talked to over phone and not the pick up location.

My experience was very good there at LWM.

The staff on site was friendly and helpful, but my card was charged multiple times, which resulted in the card being declined. I was able to make the purchase using another card, but due to the extra pending charges, I have been left with no money at all for extra moving costs or costs of living for several days. My move was rather sudden, requiring a very tight budget. While I do not believe that this was intentional at all, it has significantly inconvenienced me, as I am now alone in a city hours away from anyone I know, and have no money at all.

There isn't much to do at this location. The employees helped me hook up the trailer and in hook when I returned it. They were helpful and courteous

First off the management was rude and no help. I never got my call for the scheduling of pickup till late that night before. I was told I would have a 20 foot. Get to the location and the manager is on the phone non stop. Makes it hard to talk to. I end up with a 26 foot truck wasn't happy. Now I spent more in gas and I also didn't want the over priced insurance and I ended up with it. Want told I was getting it.

Guys were friendly and professional

Better computer. Even with reservation, it took 3 trips and 1 hour to get equipment rented while $75/hour movers waited. Had trouble unloading car from transport because trailer was bent. No dash lights.

Everything about this rental experience was great - the location, helpfulness of the store owner, condition of the rental van, all was very pleasant.

I appreciate how quickly the check out and drop off processes were!!!