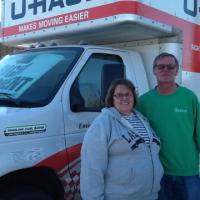 The man who help us during the return was rude.

Need to add jacks to larger trailers or make sure the person renting trailer is able to help lift tongue to place on vehicle.,

Self drop off cant rate the location

Truck smelled heavily of tabaco smoke. The trailer had a bald tire and when asked to switch for another trailer the clerk appeared upset and stated that it would get me to my destination approximately 1,000 miles away and also stated that I had insurance anyway. I advised the clerk that it appeared unsafe and was not trying to cause an accident and the clerk appeared to get more upset and appeared to demand the keys to switch the trailer. The clerk pulled up to another trailer and did not appear to check the the trailer as I missed and later found one of the trailer straps was torn.

Clean the trucks before the next customer rents it. The windshield was horribly dirty, and then you charged ME for cleaning! I cleaned the back of the the truck and kept the cab clean. But I'm not going out of my way to clean the inside of the windshield when it was given to me that way.

Customer service is outstanding. Personable, friendly, willing to help, pleasant, and assured I had everything I would need. Thank you for being there for us!!

He hooked the trailer up for us, made sure lights worked, and reviewed the inside for us as well.

The guy is super rude. I made a reservation 2 weeks in advance yet 2 days before my pickup I was told the truck I reserved wasnt going to be available.

The right break lights are out.

The interior of the cab was dirty with leftover trash from the previous customer. The inside of the truck was so dirty, we had to sweep out the trash, mud, and sand before we loaded anything into it. The price was much higher than the U-Haul quote on line.

Work more on that reservation

Customer service was good. Only problem was the price was higher than what internet site said.

I returned the trailer outside of hours so really did not see the location inside as I just left the trailer in the parking lot, but when I called the number on the door, they took care of me and the drop off went smoothly. Location was easy to find and large lot made it easy to drop off..

Your customer service on the phone sucks. The store I had to drop off at was closed and the return online was not working. My wife and I were standing there in 104 degree heat and it took 3 different people on the phone plus a manager to finally help us. You guys are awfull and I will never use you again. Maybe you should stand in a 104 degree heat and talk to four morons and see how you feel. But you probably won't even read this and will be as useless as the people on the phone who almost caused us to have heat stroke. Your lucky I completed the return properly

Loading it was hell, pulling it behind my truck was easy and smooth.

Make sure the tires are in good shape.

The people that run this place are very nice but upon getting the truck and leaving right after they closed we realized very soon that the truck had major mechanical problems it had a severe misfire and the exhaust was not connected we almost thought the catalytic converters have been cut off because it was so loud when we called roadside assistance they were supposed to come to our house and fix it before we left down the next morning at 6 they called us about an hour and a half later and said they wouldn't be able to come to us and help us that we had to bring it to them and it was already 8 or 9 at night and I have children I can't just go sit at the truck stop and wait on them to fix a vehicle that should have been maintained before I picked it up. And then they wanted to know if we would just wait till the next day and switch trucks well we couldn't do that we had people signed up to help us move and the place wasn't going to be open till 4 hours after we planned on leaving so we used the truck we had the guys ended up having an exhaust leak come into the cab the whole entire trip of a 2-hour Drive needless to say roadside assistance was worthless I don't know why I was charged for it if they wouldn't come and help and it was a horrible experience overall I don't feel like I should have been charged the whole $676 but nobody offered to make anything right.