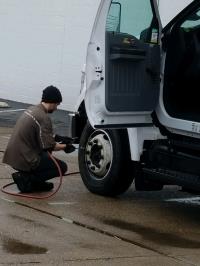 I don't believe I have EVER dealt with such incompetence. There was only 1 person at the desk when I arrived and this person was attempting to help an elderly woman with some type of rental. There was another person wondering around in the business and she stated that she had NO idea what was going on and that she had just been hired and didn't know anything about what to do. I was the next in line behind this elderly female and then behind me were about 4 more customers waiting to be helped. As the clerk that was finishing his interaction with the elderly person, he called on the person in line behind me stating that the only thing this person needed was to pick up the key to his rental truck. I continued to wait in line for another 20 minutes, The manager came into the building and went straight to her office. She spent about 10 to 15 minutes in her office and finally came out to help at the customer service counter. Keep in mind that I had secured the Car Hauler rental 2 days prior to my arrival and ALSO completed the online check-in. When the manager finally came to the customer service counter, she was requesting EVERYTHING that I had done on my online check-in. I advised her that I had done the online check-in but she continued to ask for all of my information AGAIN, including having me take pictures of my Drivers License, which I had done on the online check-in. My entire experience at the dealership lasted for OVER an hour. THAT WAS TOTALLY UNACCEPTABLE.

I was disappointed in the amount of time it took to pick-up and return the moving van, even with an online reservation secured. We needed to rent furniture blankets for moving furniture, but a U-Haul employee had left the back of a truck open overnight and it rained so they were wet and unavailable to rent for moving. I have used U-Haul services in Terre Haute, IN and Muncie, IN and this was the worst experience I have ever had. Very disappointed in this Evansville store.

Waited over an hour to return a dolly. There was only one other customer in there. There were lots of employees there I guess they were just on a long break I don't know. They definitely weren't very interested in helping me out. Kind of ridiculous

Got there at 8:50 am many people already there and only one person working the counter and I finally got out of there at 9.45am

Always great doing business with this location. Friendly, quick in and out and great all around!!

I had reserved a truck and car Dolly at min 3 weeks prior to needing on Oct 1st. I was to get my rental in newburgh and then when it was time for them to confirm they had my equipment to rent I had to dr I ve from newburgh to Riverside in evansville to get the truck and dolly. Then I had to wait 45 min for my truck as it wasn't there yet had not been returned. Finally truck was returned, (thats what i was told) they got it ready, the amount came andnit seemed off from what I was quoted and then I asked what abt the dolly for the car, and they said there is no reservation for a dolly, I told them there was to be ok ne it was made at same time as truck. They kept waiting and trying to find a dolly it showed one there but it wasn't in the system as returned but one was in the property. It was such a cluster mess I've never seen a disaster such as this at all. My entire bill was to be 610.00 dollars but ended up over 700 more than the estimate they guaranteed, I did get returned 42.00 dollars for the gas part but that was it. I've never been so disappointed and frustrated in my life, the workers was trying to get things right. I've rented from the before and never had such a bad experience as this. Very sad for sure

U should offer discount or rewards for frequent U-Haul users. I have spent hundreds of dollars at this U-Haul in the past few months and have nothing to show for it. I have not even received a discount or anything.

1. Moving help. River City Movers never called and I called them 5 times. We were scrambling to find movers last minute. It was an absolute headache. 2. We booked a truck at Iron Guard Storage Newburgh which is a 2 minute drive from our home. That was changed a day before to Uhaul on Riverside which is a 20 minute drive from our home. Not our choice and not convenient. 3. When we arrived to Riverside to pick up our truck, the code for mobile pick up had expired. We then had to stand in line only to find out the truck we had reserved was not available. They ended up getting us a defective one (ramp was broken). 45 minutes of our time was wasted at riverside and that doesn't include the 40 minute commute. 4. When I received the text link to advise whether it was in good shape, I received an error link and was unable to report the broken ramp. 5. With all issues I faced from beginning to end, I was disappointed that there was not some type of discount given.

The new staff at this location need managerial support and education... What a chaotic mess... But the nicest people who really want to do a much better job.

The process was very easy and the staff was very friendly =)

My truck was not in ky as planned. I had to drive to Indiana which took all toll 3.5 hours. Several slip ups in the process. This was on moving day. The truck was excellent. The price is reasonable. Drop-off location/service excellent.

Even though we pre-registered it took 20 minutes to get the key. I felt sorry for the poor gal trying to take care of everyone at the same . Nice facility but process takes to long.

Contacted U Haul on web and was called back by after 2 hours. Rented a 5X8 enclosed trailer and when I received confirmation email of reservation it had the wrong U Haul center and time to pick up trailer also Text message was wrong. Called Riverside center and corrected. Day of pickup my truck wiring was faulty so returned home and fixed. when I returned my trailer had been delivered to another person. On further investigation trailer I had reserved was found to be stolen and no 5X8 enclosed trailers available. Rented open 5X9 trailer finally.

Would like a call from someone at U-Haul corporate HQ.

They had mostly new people. Two people didn't even know how to reserve the equipment. I had to make two trips to the store to get the equipment secured. I had tried to call and one woman said she didn't have time to answer the phone.

The manager was great and helped me out of a situation. I had originally reserved the auto hauler in Terre Haute, but it was not available, then they tried to send me to Lafayette, which was 100 miles away, then Newburgh, Which was changed to Owensboro, KY, and then changed to Marion, IL whichwasn't over a hundred miles from Evansville. Finally, I went myself to the Riverside location in Evansville. The manager was professional and rented the hauler to me. U-Haul owes me over $200 since they guaranteed my reservations in 4 different locations which were available to meet my needs.

It's like every where else,need more people to work. The lady at the counter,even though I used the self check in,was very helpful. Someone had called in and she came in to work. Over all,it was a good experience. Thank you.

Everything great. Thank you!