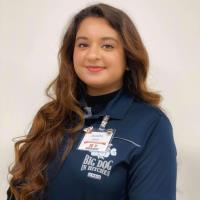 Digital code for the lock box instead of a clunky hard to open physical lock!

I was overcharged. I was told 200 kms free per day and .49 cents per km over. I was not given the free kms and was charged.69/km. Ustimer support could not find my conversation and did not help. I will never rent from UHAUL again. I was a 30 year customerw

When we all have to wear masks during the pandemic, it would be reassuring to see the UHaul staff also wearing them properly--it is supposed to cover mouth and nose, and not just the mouth.

There were several points that are questionable. 1. the mileage listed on the print out and the mileage in the truck was inflated by 1 mile. 2.The amount charged to my VISA was the estimate amount of 79.50 while the actual completed receipt was73.23 3. The idea of filling a tank to a 3/4 amount is virtually impossible to do. The amount, although slight, will always be more which favours U-Haul. :What happened to full tank out-full tank in? 4. This location has no parking for short day rental. I have used this location multiple times over the years....don't like being nickled and dimed like this. Time to move on. I hope the extra $7.38 cents (difference in estimate and actual charges plus additional mile added to receipt) you scammed was worth a loyal customer.

I would recommend this uhaul site based on it's location (across from ikea). Equipment was fairly clean. What I didn't like was that the employee at the desk took a picture of my license with his cell phone, that doesn't seem like standard â€œSOPâ€. And secondly I had to do the vehicle inspection myself (during regular hours). I don't think it should be on the customer to verify the condition of the rental, any time I've rented a car a sales rep comes out and does the inspection with you so your not accidentally on the hook for damages you had nothing to do with. Also the odometer was off by ten miles.

Equipment worked great but inside of the enclosed trailer was very dirty.

It appears the CDW charge was slipped in even though I reserved without it and confirmed in person that I did not want the coverage. Slippery business practice, will be taking my business elsewhere next time.

The Queensway location was the third location I had to go to due to the original location did not have a vehicle key in the lock box and the second location the vehicle was blocked in. Neither of the first two locations were open.

First when we went there no one working there was wearing their masks properly. Then the truck they assigned to us they couldn't find the keys for so they said it must be in the truck. We went to the truck and the doors were locked so we have to go back in so they can find the keys. While in there they call the lady, on speakerphone, who had the truck before us to ask where she put the keys. When they call she's upset that they're calling her so early on a Saturday and she says she left the keys in the Dropbox. The guy asks â€œwhat Dropbox?â€ And she says â€œthe Dropbox off to the side where I'm supposed to leave the keys. Why wouldn't you check that first before calling me early?â€ And he says â€œwell I checked the Dropbox and they weren't thereâ€ and when she starts to respond to him he hangs up on her mid-sentence. Then right after he hangs up his coworker comes in saying the keys were in the Dropbox. If I was the lady on the phone I'd be upset. So they give me the keys and say there you go. So since the keys were still in the dropbox from the last customer and the doors were locked that means the truck clearly wasn't touched or disinfected at all since the last customer. And when we ask about that they start lying saying they cleaned it and all trucks are left unlocked. And we say it clearly wasn't since the doors were locked and they had no clue where the keys were. So they give us another truck. And that one has low tire pressure so we have to get that fixed before leaving. Last thing. They said we couldn't park in their parking lot and had to go to the ikea across the street and walk back in the freezing cold. We did that. And when we came back to drop off the truck we saw 10 cars parked in their lot. So clearly they lied again. And when we asked about it the guy just kept his head down and wouldn't even look at us to respond. This place was absolutely horrible. Rude incompetent people.

Efficient .. information explained very well. It was so easy we are probably going to do it again for empty our garage to the dump !! Thank you !!

I received very unprofessional customer service from an employee at location 1472 The Queensway, Etobicoke, ON M8Z 1T5. He called me at 8 am on a Saturday February 6th... I dropped off my truck last night and dropped off the keys in the drop box. He calls me without a Hello saying " Where are the truck's keys" I told him in the drop box. He says "what drop box?" If you are an employee of U-HAUL How can you not know what is a drop box and where is it ? I am very busy and I work a lot. it is absolutely unacceptable calling somebody at 8 am on a Saturday. After I told him they are in the drop box for keys again.... He hang up. I am absolutely puzzled as to what is wrong with this individual.Â  I use U-Haul trucks a lot, however now I see i might have to look for alternative solutions due to this lack of customer service.

I was in a real time crunch. I waited in line for 40 minutes in order to get my reserved Cargo Van with one person on the desk. It was very painful and a complete waste of my time. Not very impressed with the staffing decision at a time (8:30 am when most people would be doing a pick-up.

I dropped off the truck after closing, and obviously everyone else had dropped off their trucks too - everyone had filled the front lot and it was hard to find a parking spot. I know there's signage, but maybe more specific signage for directing truck drop offs to the very back to make room? Other than that, great service.

the locker lock was garbage, it was frozen and it took me almost 20 minutes to unlock it and also when i returned the van, my car was blocked by another Uhaul vehicle .

Waited more than 1 hour for my truck.

For a 9 an reservation, we had to wait almost an hour to get the pickup van. With our elevators booked as per our reservation, our move in experience became very stressful. I wouldn't recommend Uhaul

Tried mobile pick up but was rejected at the location due to my temporary license that could not be inputted. Stood in line in very cold weather for 80 mins waiting to get through the front end. Slow and inefficient system. COVID-19 is not the problem. Thanks, Linda

We needed to move from 2 bedroom appartment, which why booked 2 utility trolley in advance, but U-Haul representative said that it's we don't have and its first come n first serve basis, only gave 1 appliance trolly after lots of request. As a result, we took 6 hours to complete moving. Very dissatisfied

The vehicle was exactly as expected and reserved HOWEVER very disappointed to be told zero furniture dollies were available. (Yes I ordered that with my initial res). Biggest problem to be told ONLY option was to buy one for $30.00CAD ?!? Seriously? Felt like a textbook upscale tactic. Held captive and even when I asked if they would just rent one of the avail for purchase...oh no of course not. Felt incredibly â€˜taken'. Way to go guys, hope that extra cash came in handy!

You guys should know that you are working in the industry of customer service! Such a disappointing experience, would never recommend this location to any one I know!! Customer Service reps are rude and annoyed!

Just as the trucks are expected to be in clean working condition with the truck swept and the cab clean of debris, so should the snow and ice be removed from the windows and windshield. It is difficult for a person under 6 ft. tall to scrape and chip ice away from the windshield after it has had a day to ice over. There was no mention made that I had to clear the snow off the vehicle as the person at the desk handed me the key. That would be like asking me to sweep out the truck before using it. I also was told the gas tank was 1/4 full and when I checked, it was on EMPTY.

Customer service reps in store are rude and seem to be annoyed or bothered when they have to answer a question. If they don't want to be there they should be replaced.