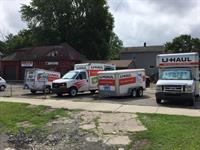 The guys at The Garage Of Erie are awesome. They are the only location I will deal with.

I would rent again

Trailer could have been arranged in a way that made it easier to hook up to.

The final bill was 37.00 I was told and paid it in cash. Then was told by my friend who's card it was that the final bill 24.00 and his card was charged. So why was his card charged if I paid in cash and what's the 14.00 difference

Awesome. Very nice and helpful. Very fast, in and out. No hidden charges, black and white type transaction

Close to home but needs brightened up. Owner did say he just bought the building this year and is woring on it

It was a little difficult to locate. There was only the very small U-Haul shingle sign to go by.

Owner said he never received notification of reservation..item not ready at guaranteed time for pick up.

Very accommodating and helpful. I was running a bit late and would be arriving close to when they were going to close.They were understanding and gave me a number to reach them so they could meet me there when I got there . I really appreciate the personal service !

Ordered truck from Grandview location received a call from 12th street after I was standing at Grandview was I on my way after I stood at the counter and was told I had to drive to the other side of town get there after talking to him that and saying I have no choice I was more than halfway there in my car speaking to him when I got there he had went to McDonald s and I had to wait for him to come back.Return truck in lot did' not tell me the lot gate was padlocked had to call him Not only inconvenced by U Haul I lost money because I drove more miles had to call someone to help me when I could have walked up the street rented truck took interstate 90 to furniture store came back parked the truck at home waited for my husband to unload drive my own car to pick kids up after school instead I was stuck without my car and had to call a friend No call of changes before I went ontime and no concessions choose Penske in the future if they rent

Did not accurately record gas gauge. Uhaul website was down when we picked up so He took a picture of my credit card on his personal phone to charge me. Seems unsafe for my personal funds

i was disappointed with the scheduler who told me no rentals were available in the hamburg NY. location i wanted to rent a truck or trailer. i was told there was nothing available from NY to Pa. yet i passed 4 uhaul rental locations that had several of the trailers & 2 trucks sitting in their lots unleased. these were all still in lots on my return trip at 5pm. i pulled an empty trailer for 90miles empty & had to pick it up in the opposite direction of my trip which added an hour to my very long day. equipment was fine & trailered well.

We received the truck one hour late because the business owner was not there or answering his phone. We had to contact the main U-Haul scheduling to get a hold of him and it threw off our whole moving schedule. His coworker finally had to call him to come in. He was kind and apologetic about it. The back of the truck was not swept out for us when we picked it up and it was annoying to clean up someone else's mess at the end of a long, rainy day of moving so I wouldn't have to pay a $25 fine.

Thank you so much ! The manager was very nice and professional.

We had ordered two mattress bags and two sofa covers to protect our furniture. Our pickup location was moved from the Buffalo Rd location at the last minute (not our choice) and we were told that they had none of the supplies we ordered. We had no idea where to get these on move in day, so we had to do without. Very frustrating.

My order was split between two locations, so I had to drive the 27' truck into the small yard at this location and turn around. When I called to return the motorcycle trailer to this location, I was unable to make a connection because the phone was busy for 45 minutes. The agent demonstrated that it was U-Haul's assigned phone that was the problem. I dialed it from the location and it rang only once on their office while giving me a busy signal (as before). I don't know why U-Haul couldn't have had both units available and ready at my preferred location.

Highly convenient, was able to get myself home without back up on my bike stowed in the truck.