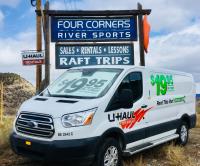 Once again I was blown away by the professionalism of this U-Haul location. I felt like a long haul trucker pulling such a fine piece of equipment across the state. The kind, friendly and knowledgeable staff along with their sweet shop kitty helped make my move all the better.

Very helpful!! Turned out we needed bigger size trailer than we ordered and they took care of it. Great customer service!

Everyone was helpful and friendly

The main boss and an employee got in an arguement and the employee walked away - it was uncomfortable. Outside of this, they were good to work with getting it rented.

More of the same. I voiced concern about how filthy the truck was , the response was â€œwell it's not like we take them to the car washâ€.

Have the truck ready and cleaned for the customer who us picking up at that location. Not having a inch of dirt on the window and the employee trying to clean off the window with windex and then saying that's all he can do . The truck was filthy!!! Inside and out .. and miles where 200 off what they said it was I had taken a picture to cover myself .

Have vehicles windows that you can see through. Have a night check-in process that does not take 2 hrs and 6 phone calls to complete.

Pay in advance not upon returning the trailer.

I can't think of anything. They were helpful and did everything they could for me. Even when I had to keep my rental for another two days!

I've been here a couple times and always miss the turn to the entrance - a directional sign would be a big help for first timers and old timers alike.

Don't change a thing. The staff was exceptional. The best service I could ask for. Thank you George!!

Super easy drop off. Only took about 10 minutes total, and the guy who helped me was super friendly.

The staff are this location is great... very friendly and helpful.

Great customer service by George in Durango!! Give him a raise.

Nothing. Service was great!

This was honestly the worst experience I've ever had in my 56 years. The man who took care of the rental was absolutely the most belligerent person I've ever dealt with. I was renting a trailer and had a Wounded Warrior friend with his truck helping me. The UHaul rep was not giving him any guidance as he was backing up. My friend came back once and was about an inch off the hitch. The UHaul rep said "this guy sucks at backing up. What an idiot". My friend backed up again ( with really poor guidance from the UHaul rep and wasn't back far enough. The UHaul rep said "what a fucking idiot" I said calmly "the guy you are calling a "f'n idiot was blown up in Iraq fighting to protect you". The UHaul rep then said without me saying anything, "we should have never left Iraq. In fact, we should have never left Vietnam. Those fucking Communists are trying to take over the world". I never asked him to comment on world politics. I was trying to rent a trailer to pick up a car. When I first called to rent the trailer they said it was for 24 hours. They asked me if I knew when I'd bring it back. I said well within that period but I wasn't 100% sure. I said the drive to Telluride was 2 hours and another 2 back. I had to load the car on the trailer and wasn't sure how long that would take. She said "that's okay, you have 24 hours". When we got to Telluride, we found the several mile road was dirt and one lane, so we had to drive slowly. Instead of getting back at 2pm we got back a little later. I got a call while we were on the road back asking me where we were. I explained that we were driving back and were in Dolores and would drive directly there after dropping off the car. The person said "That's fine, you have 24 hours on the rental". When we got back to UHaul, the original rep was sitting in the office and saw me but didn't come out after I knocked as the sign on the door said. 15 minutes later he walked out and blew up at me. He said he "do you see this guy waiting here ? What the fuck". He then got even more belligerent. My Wounded Warrior friend who was helping me tried to calm the Uhaul rep down. The rep responded by saying "Come on, you want to fight me? You think you are tough?" He then shouted " you are so lucky I'm not charging you for all the shit I've had to deal with" We finally tried to pull away after the checkout and the UHaul rep got in front of the truck and said "Come on, you want to fuck with me? Get out of the truck." He finally let us go. I am a 56 year old professional and a business owner. All I wanted to do was rent a trailer to pick up a car in Telluride and bring it back to Durango. What I got was and experience that I will never forget. I will never rent anything from your company again. I also let everyone in town know the experience I had with UHaul.

It was a very efficient clean operation.

These folks provide fast service and get you out.

You all are super friendly and adaptive-- your location is easily the best experience I've had with uhaul.

very helpful staff. Helped me find a lower rental rate with a closer return point. Thanks!

George was great to work witrh

I've been renting U-Haul's for decades. This pick up was the best U-haul experience I have ever had. By far.

When I expressed concern the truck had 97k miles they just said "oh it's fine it has regular maintenance". And then it blew its transmission