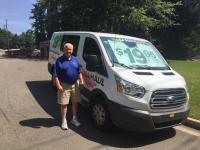 They were pro active to give us a code to enter the gate in case we were dropping off on Sunday, not Monday.

Wonderful renting experience! The staff was more than helpful and we truly appreciate no hiccups on this day! Thank you!!

First, the name on the U-Haul site "Storage Sense" Â is different than the name of the business which is "Top Notch Storage" so I was confused when the U-Haul saved quote I received said I should pick up my van at "Storage Sense".Â  While I appreciate the owner wanting to be contactless, informing me on the website that I would need to reserve and pay for the van, upload my credentials, etc. online while I was still at home would have saved me a lot of time but instead, when I got there the man at the storage place informed me that everything would need to be done on an app so I ended up having to type everything on my phone which was frustrating. There were several existing dents that were not marked so it was up to me to document these [in the heat and humidity and also when I was really pressed for time.] when it seems that it would be up to the franchise owner to do this as some were clearly not new damages and should have been marked with an "x'. The tire pressure was also low according to the start-up message [which I sent a photo of in the pickup photos] and it was dirty [pictures were also sent in the app when I picked up]. I found some old food in the door pockets after I was on the road so no photos were taken of that. I am certainly not a perfectionist, however, when there are stickers inside the van that say something like, "You dent it, you pay for it" then I expect a certain level of tidiness on your part, too. Per the contract I signed before the keys were released to me, we made an agreement that I will pay for any damages [that was worded much more elegantly, I might add] so stickers like these, in my opinion,Â  are just repetitive but rude as well. Also, since someone has already paid for all of those old dents dings why haven't they been fixed and why did I have to spend 7 minutes photoing and uploading them so I wouldn't also be charged for them when I got back? Or at the least why haven't they been marked with the "x'?Â  I suppose if they don't see them before they leave, they just 'pay for it', too. To keep people from thinking that the same damage has been paid for hundreds of times and also to stop wasting *more* of everyone's time when they have a place to be, all that guy has to do is fix them with the money that has already been collected. Or at the very, very least, mark them with the "x'. To whoever has to read this, I realize you had absolutely nothing to do with transaction and I'm sorry you had to read through this. Every single thing involving the reason I needed this van in the first place went wrong and the transaction to acquire it was just so much harder than it needed to be. Thank you for reading. I don't think I will be using this service again.

Truck had previous damage that had not been repaired. The exterior of the truck was really dirty, even had a dead lizard smashed into the side of the truck. I requested no extra equipment with my rental, however there was a large pack of moving blankets as well as a dolly attached to the inside of the truck. I will admit that is was a bit disappointing to have equipment taking up space that I did not request. In actuality I had less space in the truck than was expected. Customers should be able to use all the space in the truck.

The drop off location was a little too cramped and small for my situation, but it all worked out fine as the drop off email notice was timely and accurate. Excellent contact less, flexible service!

I was told that my online reservation had been cancelled though I did not cancel it. It got worked out, but this is the second year in a row that something like this has occurred from this location.

Storage Sense was great! They even allowed me to borrow a dolly as long as I brought it back, at no additional charge. Staff was nice and courteous. Definitely a happy customer!

I had a scheduled pick-up time for 2pm. The employee was not present as she decided to make a bank run. I had to wait for her to return for pick-up.

Again, the overall experience was efficient.

I signed up for the guaranteed truck days in advance and when I arrived it was not available. I then had to go to another uhaul to get a truck then drive back to the original store to get a dolly. So where's my guarantee?

Attendant should know how to help hook up the transport.

This was supposed to be my pick up location. I got there and they did not have my equipment. I then had to travel farther from my destination pay the same amount and got less allowed mileage.

Nothing. Very good support from everyone at pickup location.

Have the product at the location that was scheduled for pick up and have someone to assist with hook up and check product over. At second location no one came out to assist either.

There is nothing to improve. It was all to easy to drop the auto transport of.

Very friendly and helpful people! Thank you so much for your service!!!!!

I did not appreciate the location changing at the last minute. I cost me 10 additional miles and an extra hour which I did not have to spare.

The truck worked well and served our purpose. The issue we experienced was with the associate in the office. We were charged for use of the dolly and pads when both were clearly unused. We were then required to call a phone number to request a refund for those items and are still waiting to receive those funds. Bad customer experience.

My sister and brother in law offered to do us a HUGE favor and bring some furniture from Ball Ground, GA to Macon, GA on Saturday 11/3. I made the reservation on 10/29 so that they didn't have to spend the time, using my sister/brother in laws name, card #, since they would be picking up. I reserved a 6'x12' trailer for 24 hours @ $29.95, I chose the $8 safe tow coverage, and 2 sets of furniture pads $20. Grand total on the order was $57.95. I chose the West Forsyth Storage on Canton Hwy. to pick up. The first email confirmation 10/29 had that address on it. On 11/3 at 9am, the pickup time we chose, my brother in law arrived at the location on Canton Hwy., and no one was there, no cars, no one in the location. At that time, he called my sister, and she found a 2nd confirmation sent on 11/1 with an entirely different pickup location 20 minutes West of the original, which was near their home. She called that location and was told they did have the reservation, but not the trailer, that no one had returned any yet from the day before. That location called around and found a trailer East of the original location about 30 minutes. My brother in law went there to pick it up, the girl working told my brother in law that she would go ahead and let him drop it off in Macon, without charge, so they wouldn't have go so far out of their way to drop it off the next day 11/3. When he went to get the trailer on the truck, she told him she did not know how to do it, and there was no one else there to help him. When he gave me the receipt so that I could cut them a check for doing such a kind favor for us, I found it was for a 2-day, one way rental, $118/trailer, $16/safe tow coverage, totaling $143.38. He then had to go to the other location and pay $21.40 for the furniture pads. The time on the contract says he picked it up at 10:31am, so an hour and a half out of his day due to UHaul's error, and when they got to Macon, we unloaded the trailer and returned it around 6pm, so it wasn't even an 8 hour rental. When I made the reservation, I did not choose a one way rental because it was over $100 more to do so and they had no problem taking the trailer back with them and dropping it off. This morning I spend 50 minutes on the phone with someone who "started a case" for me, and told me that UHaul had 3 days to respond IF they found any issues with my complaint. Well, I have issues with all of this, and I hope to hear back from UHaul regarding a refund and charging what we originally signed up for. I have moved more times than I care to count, and have always used UHaul, I have never had an issue like this. They do like to change pick up locations on you often, but that is it. This became comedic by the time it was all said and done.

Chris was great and very helpful!