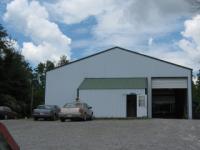 Great to work with, seamless rental, thanks!

Front office was a bit cluttered and dirty, had to wait for someone to come to the front as they were in the far back of the garage, but it was Christmas Eve and I dropped the trailer off earlier than contractually obligated. Thankful they were able to take it and even helped back it into the spot they wanted it (I'm not very experienced backing up a trailer). Even helped pull the trailer off the hitch! Overall good customer service!

His a real nice guy, real professional as far as I concern that's the only UHAUL place in Crossville TN worth to go to.

Was location clean and inviting, well, they work on campers and it's a repair place for them so no, it wasn't clean but I understood the place being a mess. But, they were very professional, knew what they were doing, and got me out of there in record time! I would be happy to recommend this location to friends, family, and the general population.

Awesome ppl friendly and go above and beyond to help their customers. .ty

Wasn't anyone there when I dropped off truck--I know it was Memorial Day, but there was no drop key slot or notice of one either. Place was very unkempt. Looked at all the doors & garage doors for a drop slot. Had to leave early the next day & had to have my sister drop key off. Had called customer service the afternoon of Memorial and she kept insisting that they had a slot and hung up. Not really pleased with your customer service reps. I noticed this drop off has several reviews of the same issue I had. NOT very impressed.

For starters, when we went to return the truck, the person that eventually answered the door, told us they weren't open on Sundays and to bring the truck back on a Monday. We were told to and scheduled to return the truck at that location on that day and time, yet they too were not open during the times Uhaul scheduled for us. I don't know if that's a miscommunication on the shop owners part or on Uhauls lack of attention to details. But this whole experience has been unprofessional and it's very doubtful we will use Uhaul again when we move into our next home by the end of the year. On a positive note, the truck was clean and ran fine for the 300 mile trip, so thank you!

Weren't open on weekend but other than that all was ok.

The guys at this location are awesome. 2nd time I have rented from them and both times they made it easy and pleasant.

The tow dolly strap down ratchets didn't work well do to lack of lubrication.

thel trailer had glass in it and had to be cleaned before we took it and it was not securely put on my truck hitch because when i put my car on it, it bounced off my hitch and slammed into my tail gate and smashed it and scratched it and almost hit my grandson in the head. To start with we had reservations at Griffin U-Haul in Dayton , Tennessee to be picked up at 10 AM, I never could get ahold of the lady there so the night before I called the main u-haul number and Kyle said the trailer would be there for pickup, called for over an hour and no one aswered the morning or pick up so i drove there and no trailer. I called u-haul back and they said we were to pick up at Pikeville, TN, and it was only 10 min from us. I said no it is over an hour. Talked to Josh who was rude to my wife and argued with her about the hour away. My wife said we were being delayed our trip because we had to spend the gas and the time to go 2 hours out of the way there and back to pick up somthing that was confirmed to be in Dayton.Josh said the whole time i spent arguing with him that I was the one delaying my own trip. My wife hung up on him and I went to Pikeville, when I got there the place was closed. I called the number an it was answered by a machine that said he was closed but close by. He was no where to be found, went another 1/2 hour up the mountain to crossville, no trailers. Called U-Haul again, by this time it was after 1 PM. U-Haul found a trailer on the other side of the city which I went and got, I was not 2 hours away from home. My wife and son tried to call Pikeville numerous times, left 4 different numbers for him to call. When I got home after 3 that afternoon, the man from Pikeville called and said he had to go to the bathroom and did not have one in his shop so he closed an went home but was now there and we could come and pick up the trailer, my wife said forget it we found one and hung up. My son called Josh at U-Haul again and told him this fiasco and he said, so what do you exspect me to do. WE were delayed almost 4 hours getting on the road to our destination and had to spend a motel room expense because we can not drive after dark. When I returned the trailer to Holdens the guy said we did not take out ins on the trailer so they couldnt do anything about the damage to my truck. I am very upset with U-Haul and think something should be done , this was not my fault. Josh had U-Haul send me $50.00 in the mail, for my trouble of having to go 4 hours out of the way, but what is going to be done about my truck?

The staff was friendly and helpful.

Didn't know we had to pay taxes on mileage but overall things were good. Thank you

Truck was in poor condition. Very rough on the highway. Not sure if was unbalanced tires or something more severe. Truck was parked in grassy area and was stuck in ice and mud when I picked it up. The attendants had to pull it out with another truck. The attendants were nice and helpful but the office location was a disaster. Total clutter with barely room to walk. Then N. Main street location in Crossville is bad as well.

The dealer in Crossville TN although pleasant, was inconsiderate when it came time to pick up the truck. We were instructed to be there a little after 9 am but at 9:20 when no one was there, I called and he had to check, called me back to tell me the guy to open the shop would be there in a little bit, I asked him what was a little bit and he said about 20 mins. So needless to say we couldn't pick up the truck for over an hour after we were suppose to, which threw off our schedule. Poor customer service if you ask me.

I told the person behind the desk that the headlights were very low (as in brightness). It was difficult to see at night especially through the mountains. I do not know if the way the truck is manufactured, but I drove with my brights on when I could.

There was no drop box for keys

The gentleman that helped us was very good, and made sure we were set to go. Thanks!

LOVED this trailer! So well built--wish I could buy one myself. Folks at the rental place were VERY nice...even walked me to my truck --under their umbrella--in the rain!