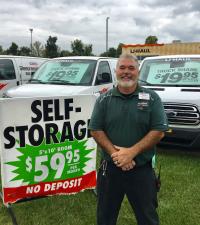 Front desk employee rude and not willing to help at all. Complaining about her job and her responsibilities

I did self checkout to avoid coming in contact with anyone because of Covid, and I still had to go inside anyway. I was told the truck assigned to me had just been turned in, which was apparent because the truck bed was pretty dirty and the fuel about a quarter of the way down. I had to clean out someone else's mess so I didn't get charged for a messy return. I also had to go track down another attendant to get the keys, who never set a word to me despite me talking to them twice. When I returned, the same attendant seemed annoyed I had started the return process in the app and told me to just finish it at this point so her time wasn't wasted. A very unprofessional trip all around.

I arrived at 6:35 and placed items in my vehicle. Pulled to the sign and waited 15 minutes as the sign instructed and no one came back out. When I went in they said I was past the last check in time and to follow the after hours checklist. The app wasn't working. Was on with customer service for over an hour trying to resolve what to do with truck. Taking it home and putting more gas in a vehicle I no longer needed made zero sense. And after being disconnected three times from customer service left the lot at 830 pm. Never again.

This location was fine - - but getting to that point was horrid. Your website didn't impress - No I don't want to create a login, No, I don't want another app on my corporate cell phone. Called the first location nearest me, and they tell me they haven't been doing UHaul for at least 4 months, Called the next one, and nobody answered - Twice. Called the third, and I have no clue who the hell anserwed, and the gibberish was unintelligent. Finally called Colrain, and at least got a response, and they would have what I needed tomorrow. I get there the next day, and yes they have a 16 foot/ ramp unit (lots of them) but none for a one way haul (that's what they set up for me even though I told them I'd be dropping at Wakeman)- - so 30 minutes later, I end up at Glencrossing. I put a lot of extra miles on a rental just to get one. I lost time, miles and wasn't very happy with all of this.

The employees was so rude, and arrogant. No smile on face no explanation on rental. Also if asked questions don't give answer ninety.

I had to wait while the manage talked on the phone- and I was very stressed because of a situation created by the pick-up location- but they served me well once they were able to do so.

I was given a truck ( that was reserved ) that had the engine light fault illuminated. Obviously the truck has mechanical problems. The employee said it's been like that for awhile. There were other trucks available, so there was no need to give me a faulty truck. A clear case of discrimination ( racially and gender motivated). Will NOT use this place again.

Fabulous experience! Thanks so much!!

The app is terrible. Will never use your app again.

Tina is very rude to everyone

The remote check in process was a hassle. Wouldn't accept photos of DL, had to try multiple times. Paid for a dolly, didn't have instructions to get one out of the cage (picked up before store hours). Had to verify another phone number for reservation, that part was a hassle.

All of the staff was very unpleasant. When I walked in the door, a young woman with her mask below her nose got up and walked away when I approached her counter, informing me that I would be helped by someone at the other end. The other young woman who was instructed to help me had her mask below her nose as well and replied that she couldn't help me because she couldn't close out of the reservation she had up. After about 2 minutes, she decided to help me. She was very cold and when my boyfriend said very nicely that he had parked in a marked spot, and did he need to move his car, she snapped back with "you need to move it!" Though I had already reserved a truck online, she still had to ask me all the same questions I had already answered. Then when it prompted me to sign after inserting my card, she again snapped saying this time not to sign. She handed me the key and my paperwork, then gestured vaguely to where I would find my rental. When I returned the rental, hours before my time expired, I pulled up to the designated spot. I heard the back hatch open and close. The same young woman came to the driver side door, with her mask down and staring at her phone. She snapped that I could get out of the car because I was good to go. I asked if I should leave the key in the ignition. She said yes, like it was the stupidest question in the world. I gathered what I had in the front seat and left, not told what my final charge would be...not even having the miles checked. The lack of customer service was appalling. I wasn't expecting to be put on a pedestal, but at least being treated like a human and not like a stray dog you don't want in your yard would have been nice. The truck itself was great. The experience was terrible.

Before even renting my name was flagged for the previous rental being extended for days. It was all completely paid, & I had spoke with multiple people about the situation at the time & nobody mentioned a police report or list? Then the truck was completely filthy. It looked as if it had not even been attempted to be spot cleaned in months. My girlfriend spent over an hour just making it clean enough where is was comfortable to drive, not to mention the money she had to spend on cleaning supplies. Then when going to return the truck, the lady had an attitude over the phone, as well as when I dropped the truck off. I spend a decent amount of money at u haul, &am very disappointed in this servive.

Reserved a van, I couldn't pick it up because of system down.

I was surprised to be billed for mileage after leaving the site, so I was not totally satisfied. I have rented from Uhaul many times from Monroe MI to Cincinnati and never had extra miles charge but this time I do, I don't know why.

When I returned trailer I did not receive a receipt that I returned it. Is this normal policy? The attendant was very cordial in taking receipt of the trailer

The truck did have a little problem shifting but other than that it worked really well.

Have someone that can deal with people, the person we had seemed rude.

The location with staff on site was by far the best