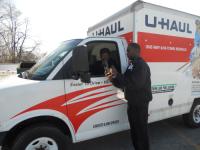 The female rental specialist was extremely professional, courteous and detailed.

The computer system went down while Tyreek ( not sure of his name spelling) tried inputting my reservation info. He apologized, saying he'd call me back when the system was up. I got concerned after hearing nothing for about 4 hrs & started an on-line reservation when he called as promised. He handled everything efficiently for me. I appreciate Tyreek keeping his word.

I attempted to do a self check in to return the vehicle and called the customer service number. The representative went over everything with me and I didn't realize I had insurance on the vehicle and was wondering why my bill was so high. I took the liberty to assume they bill they automatically bill the worse case scenario. I immediately told the representative they were going to file a claim. And this exactly what happened. Damon, the general manager said it was a crack in the top right corner of the window shield. And to add insult to injury he told me I could send pictures to his email to add to the claim that was already submitted. I took before and after pictures and there was no damage to the vehicle when I returned it. And I put the keys in the drop box.

The responsiveness of the employees was lackluster.

Both staff members that I met were absolutely awesome. They were helpful and polite and FAST. I'll definitely use this location next move!

There was no problem with the location: 5643 S. Baltimore National Pike. However, we did experience problematic issues with U-Haul in general. The location I believe that most of the problems we faced could have been fixed with better communication between corp. and the individual owners of shops. The application didn't update with the correct address for the location. As a result, I had gone to the wrong address. I get on the phone with the correct location, only to find out that the location didn't have our desired truck. We were given a smaller truck to use, which in hindsight, was something we could have worked around. There were no more 15ft trucks within the state rat we could've used which was a bummer. As a result we needed to squeeze our furniture and belongings into a truck that was too small to get the job done. The end result was throwing away two sets of furniture. Because it simply didn't fit. U-haul has been a good fit for me in the past with my moves...however in the last three attempts of moving, U-haul has not held up their end of the bargain in my opinion. I am displeased with the service in general. If there are any questions. I will gladly explain in detail. Thanks, Dev

Can't think of anything.

Nothing. I loved the protocol of this facility.

I was charged twice. I need my money back

The representative in the morning when picking up was very rude. Didn't speak and spent a lot of time talking to another person at the counter. Luckily the app started working and I was able to get my keys and be on my way from the lock box. The young guy in the evening working was very friendly and helpful when returning the vehicle.

The cashier was awesome

The wait time was longer more staff could've been available to check out the guest for truck rental, instead of outside cleaning especially since it was the weekend. However, the staff was friendly and the equipment was clean and functional.

It was my first time renting a U Haul. Not a pleasant experience in any way. To begin with, a staff member, Pamela who wasn't willing to disclose her name was the rudest and the most racist person I encountered ever. I am judging her as racist coz besides me, there were two more aged Asian couples who had a similar treatment as me form her that day. Pamela said over the phone that she had two trucks available and is given out on first come first serve basis. When I reached there, she asked me to step out to limit three people for COVID precaution purposes which is understandable. Within two minutes, two white men stepped in crossing me and she entertained them!!! Upon me arguing about it, she said she did not know who came first!! Then she asked to show RESERVATION. She had told me just five minutes back to give the truck on first come first serve basis. I asked her to make a reservation for me. She denied helping. She said there were no more available until 3 that day and it was noon. There were trucks parked outside in the queue. I stepped out for half an hour where I made a reservation for a truck at 3. I called over the phone and asked my wife who has an American to talk to her this time. She said truck was available immediately if we wanted without reservation!!! When I went back in, Tariq, another staff, a very hospitable man took care of me and Pamela kept on hiding her face from me. On a side note, the truck was dirty and smelled bad. I am not sure if that's how all U Haul places are or just this one. Will give U haul just one more try at a different location before completely rejecting it.

I Returned my equipment the same day (09/24). I get a voice message from sales lady Saturday morning (09/26) saying that my equipment was still out. When I return her call, she had an attitude and was very impolite and told me that someone would call me back. After a few hours and no one has called me back, I called again and spoke with the same lady. Again she had an attitude and was very impolite. She told me she was looking into it and some one would call me back. About 5 minutes later I get an email receipt regarding the equipment rental and I'm still waiting on that phone call!! Very unprofessional..

My experience was good but I had to wait too long for service. The clerk worked quickly and knew what he was doing, but he was working alone, which was the problem. A second employee would have shortened my wait.

The two individuals working this weekend were awesome!

was given a rusted tow dolly so was difficult to load and unload car.

The person in charge at the store was exceptionally clear, helpful, polite, diligent and professional. Possibly the best car rental experience of my life. Will 100% prefer this location over any other in the future on account of this service.

Nothing U-Haul did a great job

Customer service was EXCELLENT!!! It was a pleasure . Everything went as planned and went smoothly.

I was told that you gas tank was 1/4 full. After 10 miles the near empty light came on. Suggest all trucks have full tank before being rented

Return/repeat customers have to input their information in the system repeatedly....if your data system allowed for info to be retained for a predetermined time this would expedite processes for those who are loyal customers....