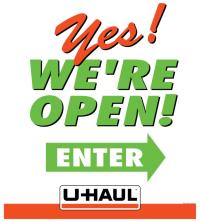 I believe everything was really good. Fast and very friendly service.

Drop off was after hours. Kudos to Tammy at main office in Springfield Illinois that worked until she found us a dolly and blankets. When we were dropping off, we had received a text saying we could drop it off at this location instead of the one further away. Christi S was helpful with getting this straight. Ten o'clock at night is not a fun time to be dealing with this but she took care of it. I guess the point is, you have some very helpful people at U-Haul but the location we started this with, and having to go that far to get the truck, started us out on a bad note. Moving is stressful Enough without having to go look for something you thought would be there.

I was an hour late on return and charged for 24 more hours. Sales person called and told me they were renting it out to another person. I was charged for services I did not receive. If I were to do this it would be considered fraud. I believe I should be refunded for the second day charge, since it was only 1 hour. Will likely choose Ryder Truck rental next time. Would love a call from Corporate manager.

Close to permanent location. very courteous and nice to work with during drop off. Thank you

I needed to have my friend pick up the trailer, as I would not make it to the dealer before they closed. All the payment details were handled on the phone without any problems. The folks at Center Creek Storage were very accommodating.

Make sure your equipment is secure and not worn out before sending it with someone!!!!

Truck bed had a little trash, but felt the interior should have been disinfected due to Covid 19 concerns.

The associate was overloaded with customers. He kept his cool, called for help and completed our transaction. He did an awesome job.

We had rented an appliance dolly on our application, the lady asked us when we were there if we still wanted it, we said yes. We had gotten the UHaul truck to our house, and there was no appliance dolly. I called back, spoke to a man who put notes on our application that we hadnt received it, and we wanted to go back and get one but there was no one there to get one, so we went back to our house with out getting helped and without the dolly.

Lower the prices on some of the big trucks.

The young lady working there remained calm and positive as she was dealing with the U-Haul computer program. Kudos! We were on hold for nearly 30 minutes waiting for a person to answer a question regarding how to verify that the U-Haul system recognized we had returned the truck. Finally gave up and hung up. Again, not about the location but about the U-Haul website/program.

they had computer problems that day and it made check out and check in take longer. Part of the problem was on UHauls end and not limited to this location.

I would recommend the location only because the rentals are cleaned and maintained. The staff at this location was nice but something was wrong with the guy that worked there. He thought today was Thursday when it was actually Saturday, he came in looking for the keys when he had the keys in his HANDS the entire time! They also argued quite a bit.

The lady was rude but if her husband was there she was fine. I mean she was really rude! She didn't know about anything and how it work.

Strange people. They live in the office with a small aggressive dog. Reminded me of a scene from a movie from the deep south. Thought I heard banjo music playing in the background. :) Take a friend to make sure you make it out OK or find another location.

Website reservation system does not appear to work correctly. Had to recreate the reservation at the location due to incorrect settings passed from the online system. Staff was quick to address the issue.

You are doing great, happy customer again, I have used U haul for more years then I can remember, and it's far better now, then it was 25 years ago..

They over charged me and would not try to compensate me. Not happy