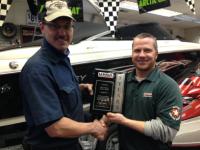 Will do business with them again

This location does not answer or respond to phone calls and also calculated my bill incorrectly. Terrible service

It took entirely too long due to your system crashing. It took over an hour and numerous phone calls to finally leave with truck. This delay was not in anyway due to the individual that checked me out.

Matty's Marine was Friendly and very Helpful with answering any questions I had. The trailer was Clean and ready to rent out. Great local business, I would definitely rent from them again. Thank You!

The woman who was helping me was easily the rudest woman I've ever spoken to in my life. She was angry at me for taking the UHaul truck to a different location and called me stupid for doing so. SEVERAL TIMES. She kept complaining that I was dumb for taking it to a Washington drop off location because thats HER truck. She stated that she can save me money by changing the drop off location to the same spot and I had told her if it saves money than I'll do it. She then replied â€œwell it's too late now I'm not doing thatâ€ She then explained to me that the place I'm returning the truck to never cleans it. I then stated that I'll be sure to clean it out before I return it, she actually replied to me and said â€œYou can fucking crash it for all I careâ€ This is not an exaggeration these were her exact words. I've never felt so disgusted by an interaction with someone I just met before. She required everyone in store to wear a mask when she wasn't wearing one. She told me she couldn't understand me because I sounded stupid with my mask on. She then again said how stupid I was for taking the truck somewhere else. She overcharged me by $40 than the rate I locked in on the website because she was angry that the website offered me a discount to take it elsewhere. This woman should never act this way to anyone let alone someone who is giving her business. I have another move coming up however will not using U-Haul just due to the fact that this woman runs the local u-Haul office.

Trying to reach the U-Haul corporate offices to do the 24 7 return was a complete disaster.Thankfully the location was great was gracious enough to come out after hours to assist.

The folks at Matty's Marine were very nice and a pleasure to deal with. They represented U-Haul very well and I wouldn't hesitate to use them again.

The lady at the front desk went above and beyond to make sure that I had a clean truck to use. She explained everything to me quite well was very nice. Except for the initial confusion concerning the truck, which I don't believe was her fault, everything went well. I will be in need of a smaller truck in the very near future and will be back to this location.

have cleanest trucks and they were very helpful to me. Advised me on all my needs. Even told me to come back the next day when a appliance dolly would be available if I still needed it.

The check-in procedure when wi-fi is not available and it is after hours at the facility, is a terrible idea. A lot of us do not have data plans and live in a good cell phone reception area.

when returning after hours faster customer service to make it easier. or maybe if my email was correct it would have been easier, not sure but overall great equipment and service at pickup!!

Uhaul is definitely an inconvenience for them and they were not veey friendly. Uhaul's policy of calling a friend is RUDE! We were 5 hours from home and to have Uhaul call someone else to verify that we have given a correct second phone number is wrong.

I was confused as to where drop off the truck and leave the key. The site representative was a little rude but kind enough to ask If I wanted to return to fill up the gas tank as I had not done so prior to being charged for it.

My husband and I picked up our U Haul on Saturday, January 12, 2018. When we picked up our U Haul, both the woman and man that work at this location, were very nasty to my husband and I. The woman seems to lack poorly in customer service, as well as the man. When we picked up the U Haul, our door was frozen shut. My husband told the man about it, and he was in such a hurry to lock up the shop, that he seemed to not care. He kept telling us that we have to drive down the road to get it to open up. Once we drove down the road, and it was still frozen shut, the man then became even more nasty and had an attitude about it. We rented it until Sunday, and I got a call from U haul on Monday, confirming that my U haul was back where it should be. Now today, I just received a call from the shop that I picked my U Haul up from, and the rude woman tried to charge me for a U Haul rental of 2 days. I called U Haul myself and got it straightened out. I will never rent a U haul from this location again, nor will I ever recommend it.

No improvement. Best customer service and helpful. THANK YOU!!!!