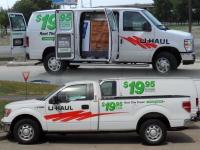 This was the worst service from uhaul Resevations and expensive hidden costs were a nightmare. It is unlikely that I will use uhaul or recommend U-Haul again

Completed contactless registration. Due to trailer not being ready (no wiring harness), they still needed to spend 30 minutes processing the rental standing next to me even though UHaul website said all information was set and it would be contactless and quick.

The pick up was terrible due to waiting to be approved. That shouldn't be something a customer has to stand there and wait for on their cellphone, that should be taken care of at the start of the rental process. â€œApprovingâ€ someone while they have already come to get the vehicle is ridiculous.

The owner of this facility complained about how hard his life is, how much money he loses, he complained that I made the reservation online and that he was just a storage facility for uhaul and he didn't make enough money. I felt very unwelcome. I should have chosen a different facility, this guy is miserable.

Uhaul website was not responding so they did all on mobile phone. Excellent staff, very friendly. My complaint is with Uhaul. They wanted me to take to drop off over 40 miles away. This place was 5 minutes away from my house. Also, Uhaul charged me extra for going UNDER miles. Dates was all wrong. I returned equipment and then got calls if I was gonna pickup equipment to use. WTF?

The computer and billing system was a nightmare through no fault of the local office. I rented the trailer for one 24 hour period but was billed double with a late charge. I always rent from U-Haul for the one day. The regional office called before the 24 hours was up and said I was late. I was not! Great trailer but lousy billing resolution

Guys had no idea I had a reservation. Took them over an hour to figure out how to print the paperwork and didn't even have the trailer plowed out. Had to wait another hour while they removed the snow around it. Called the district sales manager to tell him about my experience and he basically told me to go fuck myself

It was a small mom and pop place that did not have a very inviting look what so ever but the people were very friendly and helpful and it may have looked uncomfortable in there, but I was not.

It was difficult to find as the street had two names, the signage on the site was poor, and there really was no good place to park such a large truck.

Everything about uhaul is frustrating. Hours on the phone, transfers, being disconnected multiple times, different quotes and the scheduling department is a joke. In a 7 day period, I spent more than 4 hours on the phone. Don't get me started about the laughable web site. Seems like a company that gets there is not much competition...with that said, I have to use them a few times a year.

after I picked up the truck and went to my delivery location and went to load the truck I opened the door to find there was a sofa and lazy boy chair left in the truck and that I couldn't just dump them off where i was, and I had to pack my things around the sofa, and then drive back to the uhaul location and then remove the sofa and chair myself, and then go back to the location to pull the rest of my things. the woman who worked there was kind enough to offer and help but the whole thing was horrible and a waste of my time and work and I couldn't fit everything I needed to into the truck that day because there was a sofa and chair left from someone else in the truck! the floors were also filthy and the truck was brand new. I didn't even bother filling it back up with gas when I returned it because I wasted so much time and energy filling, driving, and unfilling the truck because of the stuff left in it by the previous rental. if I get charged for gas I'm going to raise hell.

When I arrived at the U Haul pickup location, it was in a poorly maintained trailer. The Woman working was rude, and quite frankly had zero clue what she was doing. She did not have answers to any of our questions, she kept messing up trying to make our reservation. The prices came out different every time she tried to make our reservation. The trailer was DISGUSTING. It smelt of cat urine and there was cat feces all on the ground. There was a cat running around the trailer, there was moldy food everywhere. Myself and my boyfriend left because we became so infuriated by the woman, we went home and made the reservation ourself online. When I went back to the site to pick up the truck, the reservation on my phone told me A different price than what was given to me by the woman in Brimfield. She kept reassuring me that the money would go back into my account once the truck was returned. NO MONEY HAS GONE BACK INTO MY ACCOUNT. I have called her, I have called customer service. I am becoming very very frustrated. You will never have our business again with your company. The employees have been rude, they've sworn at me on the phone, and the trailer was disgusting. I will be sure to post a review on every website about your business.

Were there over 1 hour. Guy didn't know what he was doing! Dirty and gross

Awful experience. Had no idea how to rent u-hauls online. Need to take that class again if they will be handling any more reservations. Rented the wrong truck and took over an hour to fix their mistakes costing me time. Did not have the correct millage on the contract or the fuel level. 0 of out 10.

my issue is with uhaul itself. When I called for my reservation I specifically said I wanted to pick up and drop off in Ware MA multiple times on the phone with the woman. When I called a few days later about changing my pick up time I was told I was picking up in Brimfield. They said they might have changed it due to ware not having the truck I needed. But when I was making my reservation not once did the woman say ware didn't have the truck, nor did she mention the town of Brimfield at all as I would have corrected her is she had. I would have taken a different truck that was available in ware if I had to for the pure convenience of where I was moving. I had to travel out of my way for pick up and drop off as well as pay for more mileage because the travel was close to 20 miles away from my home to drop off. As opposed to the 1 mike the ware location is from where I moved. Also when I called about changing times the people I spoke to were of no help. I just kept being told to call a different number. I will no be recommending uhaul itself to anyone as the people that work there don't seem to know their ass from their elbow. But the place that I picked the truck up from was great!

The location was fine although, the staff was awesome and helpful probably because its an independent company and not part of the Uhaul corporate machine. Uhaul has their hours wrong- they open at 9am not 8am. -Uhaul itself sucks big time. Don't let people reserve a certain size truck at a certain location if you call the day before to tell them you cant make it happen, and now they have a smaller truck an hour further away, completely fucking up all their plans. Really terrible company I will never use again- Uhaul itself is the fucking worst. FUCK YOU Uhaul. FUCK YOU for doing that to us.

Your service was disgusting, deceitful, and not in any way good for a recommendation. I will never be using you guys again.. you claim to have the truck and the day before, you are able to provide something not even close to what was told, you stated that do to high volume of costumers that the location of the truck I needed might change never the actual sizes.. people depend on you, and you fail, over and over again you guys fail... so congratulations you lost a costumer, I know, no worries on your end you will continue to make money screwing people over.. hope you understand how unfortunate it was to work with this below average company.. this is just my opinion, I'm sure others would say different.. and I hope they do..

It was good for me. Not much to improve on, maybe it could be a little quicker doing paper work getting the truck and leaving. After doing everything on line it should be sign and go.

I know the place. Good people.

Friendly and accommodating service however some cliches with computer registration.

There is a big sign in your truck that reads Save $25.00 return truck clean and mats folded. I didn't rent any mats and swept the back of your truck and left the cab spotless and was STILL charged this "cleaning fee" should have taken pictures but I never thought that someone at UHaul would be this dishonest and unprofessional. If anyone ever asks me about my experience with you I will definitely tell them to reach out to a more reputable company like Ryder who I've done business with in the past with no issues.

Very nice man helped us when returning it, I would recommend this u haul puck up or drop off, thank you