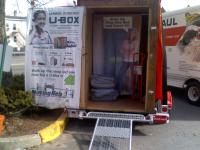 I prefer to drive the extra distance to this location. I've been there several times. They're always on the ball and nice. Please thank them for their help on my behalf.

Front desk attendant was rude and unhelpful. Didn't give me any paperwork or explain how the service works. There was not a dolly available, despite requesting one which made it nearly impossible to move all my boxes and belongings.

The general manager was not wearing a mask and told a guest he wouldn't because it â€œdepends who you believeâ€. When the gentleman (probably about 60 years old) asked the GM's colleague to tell him to mask up, she responded that he needed to come in to get his truck, so it doesn't matter if he puts his mask on because the only way he can get the truck is to come in. As a diabetic, this response and lack of professionalism is absolutely appalling and offensive. The first pickup truck we were giving had actual marijuana sprinkled all over the front seat. The GM told us that some 16 year old kids from the apartment complex next door sneak in to smoke weed in there. Aren't the doors locked though? The truck we ended up getting had a quarter tank of gas and we had to fill it up before we even got going. Overall absolutely TERRIBLE experience. I was truly dumbfounded. In a time when cleanliness and compassion should be emphasized, this location lacked both and even ridiculed it. I will never rent a truck or van from you ever again and would ask for a refund but don't expect that would be an option.

They incorrectly charged for an additional day. They processed the refund and still didn't get my money.

I almost never respond to write reviews but I have to say, especially in this time of COVID, that the inside of the van was very very dirty. I drove it home with 2 fingers and had to Lysol and Windex the entire inside to feel somewhat comfortable. I even had to put towels on the seat.

I was not given a receipt when i returned the truck on October 9th (3 days into a 5 day rental for a 6 X !2 trailer). I was told I didn't need to stick around as I would get the receipt "in 15 minutes". An hour later when i called they said I would get the receipt in "2 to 3 minutes". Two hours later when i called back was told there was a damage report on the trailer (they acknowledged they could find no actual damage on the trailer). I said I Uhaul rented the trailer to me in its current condition and I didn't file that damage report and I drove the trailer 1,000 miles and didn't have issues and returned it with no damage so any damage must have been before I rented the trailer. i was told the manager needed to sign off on the damage report issue and he wasn't available till the next morning. When I called the next morning and spoke with the manager (JP) he said he had no knowledge of the situation but would investigate and get back to me in an hour. Over an hour later I heard nothing and went in personally to get the receipt. JP eventually gave me the receipt (he had not worked on it till i showed up). Then, 3 days after I returned the trailer I got another receipt saying i returned the trailer two days late (on the 12th) and was charged an additional $71.50. I called UHaul customer service and after 45 minutes on the phone i finally was told the location agreed I returned it on the 9th and the additional $71.50 charge would be refunded. The customer service agent also said the return receipt I was issued on the morning of the 10th (saying I returned the trailer on the 9th) had been "reversed out" which is why i could be charged later. In none of the above interactions with Uhaul did anyone proactively call me to notify or explain. Also, anecdotally, when I went back in on the morning of the 10th to personally get the return receipt I noticed the the trailer was not there (it was the only 6 X 12 in the lot when I dropped off) not giving me a receipt because of a damage report issue seems suspicious.

Make the customers more knowledgeable about returns and fees.

Make sure the cab is clean. I found someone's left over metal water bottle and a water flavoring bottle on dashboard.

Ensure that all vehicles are properly maintained and checked. The truck I rented wasn't maintained well.

Staff was very helpful and polite. As always.

My truck pick up location was changed 24 hours before the actual start time of 8:30am for contactless pick up. The new location did not have contactless pick up so I wasted half hour and half hour getting home where my movers were waiting and had to pay them extra. The payment code did not work & kept rerouting me to the main dashboard so I had to call Uber and wait for 35 mins to get payment codes. Not sure if I'll ever rent again from here.

This was not the location I scheduled to pick up a vehicle from. I was bounced at the last minute, to a new location, further away, to retrieve my truck. I had also reserved 2 dolly's (box & appliance) and neither were available when I arrived. I'm not sure why I was moved to a different location that didn't have the materials I needed, but it was extraordinarily frustrating, given I had made this reservation weeks in advance.

Keep it up, you are excellent

I rented a 15' truck on September 30. I drov it from the location, 240 N Beacon Street, Brighton, to 60 Saunders Street, Allston, MA to pack up my daughter's one-bedroom apartment and then to 130 Lincoln Street to the CubeStorage facility in Brighton, MA. I then returned the truck. I was charged for 108 miles for a total of $117.72, which is crazy, I total distance of this move could not be more than five (t5) miles. I called the Beacon Street office of U-haul and explained the situation and went in a second time to complaint about this. I was told that I got a credit for the mileage charged, but it did not happen. I do a lot of business with U-Haul and expect a substantial credit for this charge. If I don't get it, I will contact the BBB and the Attorney General about this situation. Obviously, someone mis-read the odometer when I returned this truck. Please call me at 267-761-1131 immediately. Christopher Dunne

Provide estimate of the full price. Final bill was $30 higher than quote, due to environmental fees. (????) And tax not shown in estimate. Final price was higher than others.

Check in return in timely manner. Not charge for extra day when it is returned on time. Not be forced to waste an hour on the phone trying to reach someone to correct mischarges.

This was my first trailer haul, and I want to thank the Brighton team (Sunday 9-27-2020) for all the setup help. Great to work with, they went the extra mile and more, and were very efficient fixing our setup issues.

i booked my UHAUL truck from Sommerville, and after waiting for over 1 hour i got to know that the truck was not available (that was booked and available at the time of booking). I was routed to Brighton office which had an available truck (the office there was great and helpful). overall this costed me 1 hour of movers, since i had booked them already and they couldnt do much the first hour cos of truck not available. (yes I had booked the movers to come 1 hour after picking up the truck but never the less the truck was available much later

The truck was pretty filthy. Lots of dirt and a 1/2 full water bottle left in the cab. Safety glasses and cigarette butts in the bed of the truck. Was pretty disappointing.

Perfect customer service! Everything went as planned, no surprise charges either.

Changed my drop off location to West Virginia...that way Uhaul can charge me $200 "wrong drop off location" charge. I even challenged the guys and they said "oh, this way you have freedom to drop off anywhere"