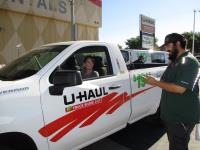 I've had several transactions at this location, and I've always been very satisfied.

Got a crappy truck, the customer service wasn't great, tried to charge me again after they already charged my card 113.00, had to pull up my banking statement and show them. Did not have the truck I wanted they wanted to give a bigger one, which there was a reason we didn't want a big one. They never answer the phones they're always being rerouted to the call center. Just overall not a great experience this time around.

Went 20 miles out of my way to rent truck and dolly and when I arrived the location didn't have the dolly. I had to travel to another location to get the dolly. Customers should not have to travel miles out of their way to rent equipment because the locations near you do not have what you are needing. With all of the uhaul locations, equipment should be made available to customers at the nearest locations.

DO NOT RENT FROM UHAUL! ANY UHAUL! Though this one has to be one one the worst. I called a day ahead and was told there would DEFINITELY be a tow dolly for my appointment the next morning. Not only was there no dolly-they said I didn't have an appointment. Not only that-they told me I must have called another UHaul. When I tried to show the guy the 2 phone calls on my phone to THEIR NUMBER-he wouldn't look and just kept saying I'd called the wrong place. So I asked to talk to the manager or boss. I was told he "couldn't talk to me today". So I asked that someone listen to the phone recording where they say "this call is being recorded to ensure customer service". They said they couldn't. By this time I'd been there an hour. So I asked them to help find me a tow dolly because I had to leave for a southern destination before the snow/ice hit. I had to FORCE the guy to help me find another one, by this time I'd been there over 2 hours. Then one was dropped off at his Uhaul-so I told him I'd be in my camper after he said he would come hook it up. 20 minutes later I saw him hitching up an auto transport to a woman's car--she was two people BEHIND me in line!! I asked him why he was helping someone else. He said he couldn't find me. He had my phone number, and I had told him where I'd be! All told it took me well over 3 hours to get it hitched up--too late to get away from the bad weather I was trying to avoid. So I got stuck with campground charges for several days because of it. I ended up calling corporate HQ customer service. I won't go into all the details except to say the story got worse-not better. I was promised a full refund- and what happened was extra charges on my credit card instead of a "full refund". That is wire fraud according to my attorney. When I called to find out where my refund was--they said my case had been CLOSED! I didn't have my refund, and the promises that were made were lies. CUSTOMERS BEWARE of THIS COMPANY

Great experience...In and out quickly

Dont change the pick up location. My truck was reserved with a credit card at a location 25 miles closer to my home. Changing this to a different location resulted in a additional mileage amount of over $50

pizza, beer and play music louder really suprised rental went so well was expecting some problems none occured at all well done

Easy drop off and pick up. Friendly staff.

A= Clean the truck even if the customer returning it claims it is clean! I had to remove and dispose of a used water bottle, and I had to clean a sticky mess in the cupholders!!! B= Check the fuel level even if the customer returning the unit claims they filled it to the proper level! I received a truck that was supposed to be 3/8 of a tank full, it was in fact 1/4 tank full. I did not have time to go back through the line to dispute this! I paid $14.44 for 8.5 gallons which brought the tank to just over 1/2 full. When I returned the truck it was half full on gas and I only drove exactly 10 miles! I am very disturbed over what I was charged for what I received. I paid the 24-hour price for only 8 hours and got ripped off on the fuel! Sincerely, William J. Chapparo! I leave things better than I found them and so should you!

Best U-Haul location in the Albuquerque area. Always have the right equipment and when I need it. Staff are always courteous, professional, respectful, and always willing to help their customers. Always a pleasure to do business with....every time.

Your staff is the friendliest and most helpful group of people I have ever encountered!! I give them 10 stars!!

We rent from here often... We love this guy

Parking is limited, if more than 1 truck is being returned at a time you could quickly run out of room. Everything else about the experience was great.

Excellent customer service. Very easy to work with and met all of my needs.

The U-Haul company needs to fix their computer program! It was extremely slow and took forever to process my rental at the location. The agent was very nice, helpful and patient, but many customers had to wait.

The morning after we picked up our U-Haul and loaded it, we noticed a a puddle of engine fluid on our driveway. We were scheduled to close on our house and start our cross country move that day. We were told that if it could not be fixed, we would be given a replacement- the thought of unloading and reloading a 26 truck on the day of our move was pretty upsetting, especially since this leak was obviously present when we picked the truck up. The contracted mechanics showed up within about a hour and fixed what was determined to be a power steering fluid leak. Part way through our 1200 mile move, the ABS light came on. Instead of facing the possibility of being told we would need to switch trucks part way to our destination, my husband limped the truck the rest if the way with his fingers crossed. It was a very old truck, with no cruise control and was an extremely bumpy ride. Clearly this truck was not very well maintained or inspected before being rented to us. My guess is that U-Haul doesn't look at their trucks unless something goes wrong and dies not perform any kind of routine inspections on trucks before each rental. You would think a very thorough inspection and QC check on trucks would be done before renting to families to load up everything they own and drive it across the country. We will probably be going with a different company next time we need to use a moving truck.

First they gave me the wrong size truck and then over charged me even though i have proof i put the gas back to what it was supposed to be. Worst experience ever

Very courteous. Dropped trailer and in and out with no problems. No improvements necessary.

Staff at this location are rude & don't know how to speak to customers. Whoever the guy was who checked me out snatched the key out of my hand & went outside to check the truck. When I was dealing with Josh he was very professional & nice had no issues with him. Let him know I was running late and he told me no worries he would change the drop off time. When I got there I was dealing with some other guy who needs to be fired. People are paying their money to rent a truck they are not doing us any favors.

I reserved a 15 ft truck with an advertised floor length of 12 ft 5 inches to move a 12 ft table. I received a 14 ft truck which only had a 11 ft 11 in length floor. While we were able to put the table in at an angle, getting a smaller truck than expected caused a lot of anxiety. The truck dimensions on the reservation website should match the store's inventory.