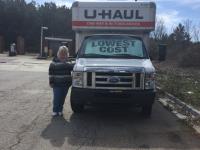 This gas station is old and falling apart. Outside just looks old and dirty. Looks very dark and spooky at night and doesn't feel safe.

Review process took too long. Also tank was almost empty. Had to put fuel in before I drove it.

Location was convenient. Should be stocked with more supplies. Furniture protecters.

Great Service! In and out!

Inflated costs, was charged a total of $153 for 5 hours. $42.27 was taken after I returned the van. The cost per mile was higher than what i was told. When i went back the next day to dispute the cost and that money was taken from my card WITHOUT my consent, the oerson on phone was rude, the person in store just shrugged. Appalling experience, will NEVER again use U-haul nor recommend this location. VERY DISSATISFIED.

One clerk and took an hour to rent a tow dolly because had to stop process for other customers.

No one there to help disconnect the trailer. Trash and debris strewn all over the back of the place. It is a gas station/convenience store, and the guy was the only one there, working behind the counter. He said he would close out my account and send me a receipt. Then I got a receipt with an extra day's charge on it, plus an â€œafter hours drop off fee.â€ I dropped the trailer off at noon. I will dispute this charge on my credit card.

The Uhaul person didn't assist with the hook up. He was in a rush.

I rented from this location because it was the closest one to my house. I set everything thing up before arriving so all I had to do was pick up keys and go. However, there were no keys to pick up because they were still in the lock box. The store smelled horrible that I had to keep walking outside to catch a breath of fresh air. Then I had to wait for the attendant to inspect the vehicle and run my drivers license again. He couldn't figure out to do it. I was waiting 37 minutes until I finally said never mind I'll cancel the reservation. He then says let me try something else and called someone and instantly everything goes through. I chose this location for the convenience but from now on I'd rather just go a couple miles away and grab a U-Haul then have to deal with this place again.

It was more than an hour after they were suppose to open, no one was there. Then after dealing with some of your very unhelpful customer service online, they still didn't show up for another hour. Customer service online were not very helpful and it took way longer than necessary for them to make it right. And they did not make it completely right. Just scratched the surface, but I could tell they were unwilling to help

I was charged over $160 for a local truck when I was quoted 39.00 Communication was horrible I confirmed one location they wanted me to pick up at 2 other locations

There was trash still in vehicle, and left over chicken bones behind driver seat cigeretts,

When I arrived at the location the attendant could not find my reservation, even after I showed my confirmation email. Luckily the truck I needed was still available for me to rent. The truck has fine. And the attendant himself was kind.

Do not give away a customer's reservation. I reserved 3 days early and got there and had to get a huge truck which was the only one they had, not the small one I reserved.

Trucks air didnt work well and the transmission was messing up. The people wasnt helpful

The store was dirty, smelled, stunk of smoke & incense, PLUS they had ADULT magazines staring you in the face as soon as you walked in the door!! The trailer exterior was good enough, but the interior had not been touched by the rental facility. We had to sweep out and use a blower to get it clean enough to pack. Will not rent from this location again!!

Kareem (store owner) is amazing to work with! If you could supply that location with one of the "trailer pullers" that would be helpful. I rent trailers often almost weekly and I have to reverse to the trailer and being by myself I have to constantly get out and gauge how much further to get directly to the hitch. That would be my only suggestion.

I wouldn't recommend this location or dealer to anyone I know for the simple fact that everything was done unprofessional. With this being my first time using U-Haul I had a horrible experience. To start off the truck I was provided with had mechanical issues to the point where I was stuck on the road, almost had mÃºltiple accidents due to the truck stalling while I was driving, and not being able to start. When I returned the truck not only did I put in more gas than I was provided I parked it neatly and politely handed the keys back to the dealer. He then asked me to wait for 5 minutes while we finish up the paperwork to make sure everything was good. He then walks around the car to ensure there were no damages and gets inside the car and shuts the door. No communication on what he was doing he proceeds to try to charge my card without letting me know that I went a bit over the mileage which would of been fine if he would of communicated with me. He then gets out the card yelling the card declined the card declined because of his lack of communication I didn't know what he was talking about so I asked him for what and he proceeded to argue without showing me how many miles I went over or breaking down the charges then talking to his Coworker about me in a different language already had spent 185 dollars on the truck because I needed to move furniture now plus 50 dollars that I don't even know if I went over the miles because he didn't break anything down but just charged me saying I went over the Mileage but after this experience I will probably take my business somewhere else due to the unprofessionalism and poor service that I was given.

The man handling the rental was trying to use a tablet hooked to weak WiFi signal and it took FOREVER. Also when he gave me a different total from my internet price, and asked for my credit card information (which I had already entered online) I questioned why. He literally screamed in my face, "If you don't give me the card, you don't get the truck!" He was a VERY RUDE and offensive person. The truck was not ready when we arrived on time for pick up because he had not completed the return processing from the last user. It took over an hour standing there waiting for him to complete and he ended up having to call Uhaul to get it done. Meanwhile he kept leaving us to wait on his other customers as he was the only person working in the place. I will never go back to this business for any reason ever again. He was a TERRIBLE representative for Uhaul!!!

There was terrible communication and charged me way more than they told me . I tried to do everything on my phone and I ended up having to go inside where they couldn't even find the key which made me late with getting my rental. Its been all a big mess! I didnt have this problem last time !

The store owner could not understand English had me fill out my info on the tablet then messed up my entire rental request which I found out later when I called to ask further question due to store owner not knowing. He had no knowledge of the equipment leaving myself to figure it out. Very bad experience