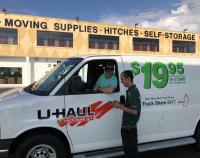 She helped me get everything I had forgotten out of the truck and into my ride. I really appreciated that

The truck I rented was absolutely filthy! I just found the pictures I took and I can't believe I didn't speak up about this rental sooner. There was mud coming out of the A/C vents and the bed was so dirty that I had to buy a tarp just to place under the furniture I rented the truck to move. I was very disappointed to say the least.

From the pickup to the delivery everything went great! Customer service was great they were so polite and very knowledgeable.

This location can improve by hiring an associate that has better customer service skills and doesn't act like they hate their job. Anthony Poole ruined the whole experience for us and I am completely dissatisfied with the service we received. I felt as if he was annoyed with his job, which isn't my problem considering he decided to work there. And to top it off our reserved u-haul was ready with smart remarks about 45 mins after the promised time. I've did business with this location multiple times and have never had an issue until today with that specific employee. I will be contacting corporate as I would hate for another person to be treated like how I was today.

Make sure the trucks have the proper maintenance done and don't road walk. Make sure the facility is cleaning the truck on the inside and not leaving trash under the passenger seat

They were very quick

I picked up the vehicle and it was dirty and only a quarter of a tank. The people there were nice and helpful.

Chris i think his name is,, did a great job, the place is good.

Picking up trailer went fine, when I open doors to fine dirt, not like dust like somebody hauled dirt in it! Not a clean trailer, did point it's out to person hooking up to vehicle! So returning trailer was fast and simple! But to have to wait over 1 hour for my deposit refund, unexceptionable, completely unexceptionable!

What is with uhaul and not wearing masks?!? Seriously What the Fuck! - I have never felt more unsafe than I do at a uhaul office. I have an 88 year old dad at home with diabetes. Thanks for trying to kill him!!!

Vehicle had food crumbs on passenger seat & floor, Cheetos on dash! 6 miles into my destination after leaving picking vehicle up engine light came on. I called about it and the representative took my number so they could call me back no one ever called! I voiced my concern after returning the vehicle and the person acted like it was no big thing. Personally I felt I was given a vehicle that was not safe to drive with that light on, but got the impression it was no big deal! Was also told I would not be charged for the engine light coming on, that pissed me off and I let him know about it! Not a good experience with this company!

Nothing really. It was all good

I was completely satisfied with the service and equipment received. UHaul really made moving my son easy.

I was told when I reserved the truck if I didn't have 5 days I would get a refund. That didn't happen. I will make sure everyone I know does not use uhaul

I was told to be contacted 24 hrs in advance to know which location to pickup vehicle and what time. I was never called what time or which location. I was charge for a two day rental. I only needed a one day rental Im disappointed that uhaul charge me for the day I didn't need the uhaul. I was not offered a one or two day rental

I called to rent a truck at the Archer location 1 week before we needed it. I also called the day before to confirm the order, as we were coming from out of town, and under a time line. When we got to the Archer store, they told us, they didn't have the small truck, we ordered. They said we would have to go to the 35th and Sheridan store, which added about 12 miles and 1 hours time. When we got there the Archer store had not even called them. And of course they did not have the small truck, so we ended up using a much bigger truck, that was very hard to deal with. And to top it off they charged us for 3 extra miles. Very bad experience.

I was given a truck that wreaked of cigarette smoke and had low tire pressure. On the truck tire there was a yellow arrow which was probably for a repair not working. Before returning vehicle I had to stop and air up the passenger rear tire. When I arrived at facility no one was there I waited approximately 10 to 15 minutes. I finally saw a girl on her cell in the bay area opened the door and asked for help. A bell or someway to announce a customer is waiting needs to be installed here. Upon return same thing I had been gone for just an hour 10 or 20 minutes and waited for 10 to 15 minutes. He said thanks you will get a receipt on your email. I explained I had a return of items I purchased I did not need. A tie down and cover and he said hold on and left for about 5 minutes. Really poor service at Sheridan location

Send links to check trucks back in like you used to do!