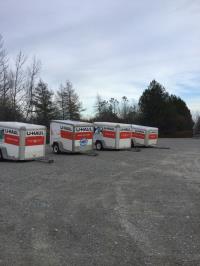 I was returning the U-Haul and was first in line and was told to move to the side and wait till everyone behind me was helped first. I waited for 20 min to be helped even though I was first in line. Not satisfied with the customer service was very rude.

We reserved a truck closer to our location to cut down on our mileage. But got reassigned to a pickup and drop off that was an additional 10km each way that we needed to pay for. Staff were friendly and transaction went well.

demanded all money up front other places just tskes a deposit

The only issue I have with this location is that it was a half hour from my final destination when there was a location literally down the street from my house. This location was easy to access and find I just wish that my originally chosen drop off location was kept.

the only thing I would suggest is putting jacks on the pole so you dont need three people to hook it on the truck.

I didn't notice when I picked up the auto hauler that one of the tires was shot. The cords were showing through on one of the tires. The rachets were in need of attention as well as they did not work easily.

Had to go back to get the packing blankets, they also were not understanding about us needing to have the trailer returned prior to the blankets and that the system wouldn't allow us to return one without the other. Our booking was until the next day and we left the trailer in the original parking lot in order to have it under video surveillance. We also are not able to store it anywhere else and the vehicle used to tow it had to be returned. The blankets were still in use. This meant the trailer was left before the blankets and official drop-off and honestly, if it is good enough for them to store it for weeks, it should be good enough for one night.

The back of the uhaul was muddy and dirty, and the fuel level was reported incorrectly. The size of uhaul we wanted was not available and they also changed the pick-up location, resulting in additional travel and km's used.

The back of the truck needs to be mopped out, it was very dusty as well. The Dimmer switch on the signal light switch did not work, so Bright lights were N/A for my whole trip, both ways. I notified the dealer about the switch upon my return.

The location and the staff that helped us was excellent but my overall experience with uhaul was not. Your website doesn't work properly. I had to change my reservation and had to call in to do that. When I called they told me that my reservation was canceled and then while making the changes I requested they changed my drop off location from Concord, Ontario to Concord in Ottawa. Also I was required to leave a deposit and now I'm told that I am not getting back my deposit even though I brought back the truck two days earlier than required. On these points alone I would not recommend uhaul in the future.

Truck was there for pick up and ready to go. Needed the truck one day longer then ordered, one phone call and solved. Good service.

It would be nice if there is someone that can help with install the trailer. I tried my best and prayed that I did it right.

This was quite possibly the most frustrating experience that we have had in years. The vehicle we rented was at the Millennium Drive location in Quispamsis however the online check in said our reservation was 'expired' when we were there at the time of our chosen pick up. We called the 'after hours' on call person who did not answer. We left messages... they didn't call back. We called the 800 number and spoke to several different people who told us to see the local agent. The business was closed that day so we then had to rebook 25 kms away from our home and pay mileage to pick it up, not to mention the movers that we had to pay out of pocket for an extra two hours while we sorted this disaster out. We were given a 50 dollar credit an a reduced rate on mileage however this did not even start to cover our extra expenses. We ended up at the Loch Lomond location to pick up our rental and the gas was significantly lower than it showed on the document but it wasn't worth the fight at the end.... the worst part is that the 50 dollar credit we were given never showed up on our visa. Very disappointing. I know that UHaul is capable of better service....... I'd appreciate a call to further discuss.

This location was very good and the woman completing the transaction was excellent. The Uhaul computer system that was used is complete garbage. She made 3 attempts to finalize the rental with the computer locking up at the same stage. Finally she called Uhaul directly to complete. The agent apologized for my extended wait. She was great.

I had no idea the bill would be $170 for 3 hours.... I own a tuck and could have made a couple trips and saved a ton. Also the truck smelled like urine or something strong in the back and the steering wheel was peeling and it was pretty gross. I had thought when I called the nice lady said it was 29.99 plus your gas for 24 hours. Apparently in 3 hours I put 55 miles on the thing... I don't know. Gave me an uneasy feeling and wasn't a good exchange in my opinion.

Location out of the way and different from the one I booked ahead online. U-haul truck was dirty in the back and the cab smelt like cigarette smoke. Staff was friendly though!

I asked the person working in the store where the key drop was and he said to give him the key. After completing the return process ( pictures etc) I saw the key drop on the side of the building. I wasn't sure what to do so I left it in the key box as the instructions said to do. I'm not sure he knew where the key box was located as he seemed to question what I was asking for.

Transaction was easy. Booking was smooth and all went well. We will certainly use UHaul again in the future.

The location was great. . The only problem was the closer location to where I needed was closed when the website said it was open and as a result cost me double the rental amount because of high mileage fees and extra fuel. What happened to the free mileage you used to get ... especially helped when doing a quick job when you don't have a truck to bring something home.... and don't want to pay the high delivery charge too. .... I believe lots of business has been lost because of this. ... u can't rent a small truck for 20 bucks and use it for an hour... now it costs 60 to 80....

They told me to bring it back with the same amount of gas then told me to put in extra gas when I arrived only to be told that I put in extra , worst customer service I've received in my lifetime , wouldn't recommend this site to anyone

Good staff and easy to deal with.