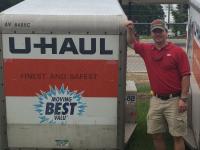 Location did not have gas in vehicle. 3 miles to empty!! Inside cab was filthy. Cup holders had sticky residue, slash stairs from a guild that was all over floor and passenger seat. Location did not have blankets I needed. Overall this location was lazy and disorganized.

The costumer service was amassing at this location! However my overall experience with U-HAUL was terrible. My truck that i reserved was not there, the dolly that I reserved was not there, and I could not get in touch with a U-HAUL representative. I have called, emailed and tried live chat..... BUT NOTHING! I AM EXTREMELY UPSET ðŸ˜¡. It cost me more money than I had planned.

Wasnt sure where to leave key. Didn't see a drop box, so locked key in back of truck.

Ace hardware is a good place to shop in the big city of Reidsville, Ga. We rented a U-Haul the service was professionally handled, the person that assisted us had a great attitude and customer service and took no time completing our paper work and took no time bringing the U-Haul around to us.My family is very proud to have Ace Hardware in our home town. Thanks Mr. Elliot and your staff

every thing was good. We had no problems.

We had to go to another location than our original drop off location. We had to drive an extra 80 miles for a free 50 miles while wasting 1.5 hour of our time.

All I would suggest is when someone makes a reservation to pick up a rental item and get a conformation number that I would think that the item would be on the premises. After traveling 2 hours to reach the U-haul place, I was then told they do not have one. I was then told that the only other place to have the truck Is approx. 30-45 minutes away. Not only did I have to go an extra 1 to 1 1/2 hours to pick up and return, it was a pain due to the time frame I had and inconvenience. Need to get better to have a representative actually call to make sure they have it on lot instead of assuming.

The truck was very loud and the rear tires needed replacing. Anytime above 40 mph, you couldn't hear yourself think!!!! How about checking the exhaust and replacing the tires.

Not one thing Staff was very helpful and nice

I was quoted for 2 days, when I arrived in Reidsville, I paid 138. for only one day. Not only did I have to go to Reidsville to pick it up, but the bill was twice what I was told

I have a problem with the online rental for the statesboro uhaul place we rented online in advance only to get a call the day before to tell us we would have to drive to Reidsville ( 64 miles) out of our way then to statesboro (where we originally made a uhaul reservation) to load daughters apartment and move her to Americus!!!!! No happy with the customer service we recieved or the burning of my gas and time to get to Reidsville!!!

Pick up was great....corporate on the other hand, not so much. Your computer system still has a lot of glitches that should have been rectified in the beta run. Service reps comment on the system not working was "I don't know what to tell you" and they hung up on the dealer. Self check in, really? All in all, very unprofessional and highly frustrating.

I got charged for a second day when I only had the tow dolly for 8 hours, that's not right.

lowei use dr cost of 15ft size of truck for local used truck for 1 load n a total of less than 3miles put on it was a cost of $36. n change which is resbonal but over priced for my use. other wise it was a great use .

I did on line express check in and still waited 55 minutes. Nothing express about that.

Not tell a person one price and charge another

They did an excellent job checking us out. Helpful and friendly. I would highly recommend.

I was extremely disappointed with my overall experience. First, my truck was rescheduled to a new location that was out of my way. Then when I arrived to pick up the truck, there was not one available and the man told me I had been rescheduled, again, to pick up at another location. I never received a phone call informing me of the 2nd reschedule. I had to drive over 60 miles out of my way and lost valuable moving time. I was extremely disappointed with the handling of this move and hopefully will not require your service again.

This location was supposed to be a 24 hr drop location but gates were all locked. We were told to drop it outside the gates in a gravel parking lot but then the catch on the trailer would not release our hitch. After being told that the closest other drop site was 40 miles away, we realized we could not go there and called a relative to come to us and help jack up the trailer until the hitch released the ball. It was 93 degrees in the sun and had to wait an hour for help as we were told that roadside assistance was probably not going to be available since it was Sunday.

I had no problem with this location - but have a BIG problem with our experience overall. I will be calling tomorrow to file a claim and ask for partial or full refund. My reservation was at a Statesboro, GA location. When I arrived there, they did not have my reservation and discovered that reservation had been changed to Sylvania, GA -- I received no communication from UHaul -- which is 45 minutes from my reserved pick up location. After several unanswered calls, the Statesboro location found out that the Sylvania location was closed. Call to Uhaul found the trailer I needed at this Reidsville, GA location -- 30 miles away so 60 additional miles round trip. Having to go to this location also put us 2 hours behind on a day where we drove 3 1/2 hours to Statesboro and were moving furniture back 3 1/2 hours. Both the representatives at Statesboro and Reidsville were kind, helpful, and sympathetic to our situation. No problem with them, but it was a terrible experience with Uhaul, whom I have rented from numerous times before without incident.