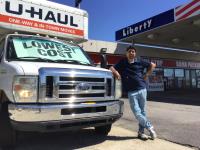 Dolly was requested in reservation but no dolly was present at truck. Refund needed immediately.

BE ON TIME. Owner of the store did not arrive until 45 mins late. Then I had to wait another 45 mins on the rental truck which was late arriving.

Very customer friendly!!! Convenient to all of Millbrook & Prattville, it is my ONLY choice for U-Haul equipment in the River Region!!!

I had a bad experience using uhaul at this location. First, the owner of this location was late and my movers and I had to wait for at least 20 minutes for him to arrive to get the truck. Once he arrive he was very short and rude. The transaction went smoothly. However, when I dropped off the truck, the cashier used my credit card to purchase an item for herself. I called the owner to let him know what had happened and they hung up on me the first time. I called back a second time they told me they would check on it. So, I had to go back to the location and provided evidence to the owner that I was falsely charged.

The cashier at the gas station where I had to go in and get the key for the u haul was RUDE. I arrived on time and still had to wait 5-10 minutes for someone to get there because the cashier said I had to. The guy gets there and tells me that the key was there the whole time and I could've gotten it. I explained to him that the cashier told me that I had to wait in him even though the key was already there. No apology or anything.

I walked in and handed them my reservation confirmation but they did not seem very prepared for my rental. Spent a long time trying to find me in the computer. The physical counter is not very user friendly .. I was having to talk to the girl through a wall to where she was looking up my rental. I had already paid on-line and they asked me to pay again .. we quickly worked that out. She was trying to be helpful .. perhaps just a language barrier. They guy there just told me to go pick up the trailer. I drove over and realized it takes 2 people. Had to drive back and ask for his help. He said "yes, I was coming" ... and he came up and helped me. Trailer turn signal lights were not working properly. Prior to any rental you should probably make sure the lights are working. I think the people working there want to help and be helpful ...they just need some training on making the pick up process smoother.

Very easy to rent and return

My overall experience was poor. My location pick up was changed at the last minute the 26 foot truck I did get was high mileaged dirty and leaking power steering fluid. I ordered a dolly and did not get one on my truck yet i did get empty bottles and a dirty truck with blankets thrown around the back. I had to buy a dolly for $55.00 and almost had a accident with my uhaul truck due to an airport in the brakes. Roadside took almost an hour to get an agent on the phone to get a mechanic out to look at the truck. The over all experience was bad I would not recommend at all and will not use again. I still got charged with no compensation. Thank you uhaul for a bad moving experience.

I reserved a furniture and utility dolly and at pickup, was told that this location doesn't stock dollies. These were critical needs to move an entire house of furniture. We had to go BUY a dolly at Home Depot because we had people waiting to help us move. I reserved a 26' truck but was given a 20' truck and told it was 26'. It was not - we measured it. The truck bed was filthy and we had to sweep it out before we could load our furniture. The worst was that the roof and fender wells leaked. Rain from the tires projected into the bed and leaked through the ceiling soaking our mattress and white couch cushions. This was the absolute worst Uhaul rental I've ever had and would never recommend this rental location to anyone.

In and out on time. Third rental from here. Thanks!

Equipment was clean. However, the vehicle ran very roughly.

See comments in pic up section

The location is shared/operated by same as gas station, convenience store, and liquor store. The equipment lot is overgrown and looks abandoned. Signage was poor as to where the "office" was.

The truck was clean but the AC only blew on the feet. Price is too high. Had the trunk for 28 hours and it cost $104!

If a customer is renting a truck and trailer the trailer/dolly should be attached to the truck or assistance offered to connect them together.

Hi falsely put my vehicle in the computer as a 2010 Honda Civic , which it is a 2007 Honda Odyssey , and then given me the wrong tow dolly my bag were too wide for it causing damages to my van on the right side , and he then stated that's my dam problem and that's not his dam problem what ever happen is on me he don't have any thing to do with it as I never use the truck and tow dolly he Refused to give me my money back told me to call customer service he wasn't given me nothing so me and my family had to stay over nite suffering, Ex..

The guy was late and the AC didn't work very good. I will never use uhaul again. I was not happy with nothing about uhaul.

It's a gas station which brings many challenges for people in a hurry to rent and use a U-Haul. The clerk is busy running the gas station and the U-Haul rental process takes sometime therefore gas station customers had priority. Terrible process and experience.

Overall, decent experience. Only complaints are that truck had two lights on, check engine and tpms.

This store does a lot with the limited staff. Will rent again!!