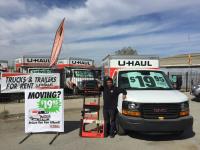 The U-haul location at Sunnyside in Clovis refused to lend me a one-way trailer for bureaucratic reasons: they simply didn't trust me to bring back the trailer, or helped me get it in a one-way trip. This caused me having to go 75 miles away to pick another trailer, which ALMOST ruined my whole moving plans!!!!!!!!!!!!

Pixley uhaul was great but the call center and reservations were awful. Sent me to a place first but the equipment was not there and the guy didn't care told me to call you guys back. I called back and the reservation place transferred me to a place that was closed and no one could help me

Just want to start of that the AT was orginally requested for pick up at Delano on a friday (6/15/18). Then received a phone call, email, and text message on Saturday (6/16/18) that the AT would have to be pick up at N.Chester bakersfield on Sunday (6/17/18). Once I get to Bakersfield Uhaul location on N. Chester, they say that a costumer dropped the AT that was reserved for me at the Union location, and that they have gave it someone else and the nearest AT that I would need is on pixely, which is only 17 miles away from delano. It was a giant waste of time, super inconvenience, and overall I just needed the auto trailer for one day and because of the giant ordeal of me going back and forth I had to turn in the trailer after hours. Oh and I was charged for the full 3 days before I even had the trailer. Worst experience with Uhaul I have ever had.

Thinking our opinion was poor in part because it was so far out of the way from where we wanted to pick up. Location wasn't just UHAUL. It had character... But wasn't a professional UHAUL pick-up. Thank GOD for the hardware store across the street as we needed to buy a new hitch.

She never said a kind word , it was what do you want what's your name. Never showed us the truck or anything about it. She was rude. Did not have time for us.

Customer service not good at all. I had to move a trailer that was attach to the truck I had got, the lady couldn't get someone to move it was not happy about that. They should have everything ready to go.

It was 35 miles away from my house. In the middle of nowhere. It sucked.

Provide an itemized receipt. Conduct a visual inspection of truck with customer. Provide customer with a contract.

The location I got the trailer was in a mom & pop shop witch I fully support however, they weren't responsible on making sure the equipment had everything it needed in order for it to be used, for example I had to buy a $34 electrical extension to the outlet in order for my brake lights to work other than that everything was fine

I was to rent from Porterville was called and told I had to pick up in Pixley was told I would be given extra miles because of the location change, which I was not given. So I was billed for the extra miles. When I arrived for the pick up I was told I would have to wait and or come back at 3 instead of the pick up at noon that was scheduled. After calling Uhaul nothing was resolved. Very poor customer service at location and at the call center contact.

Go visit them and you will see.

The OWNER needs to hire someone to handle the uhaul part if he's not going to show up when equipment needs to be hooked up. The employee was unable to hook up the tow dolly. She kept calling him and he kept saying he would be there in 15 min he never came. After over2 hours I called uhaul and told them I was going back to Beebe's in Porterville and get a tow dolly. He was great. It took so long my loaders got tired of waiting and left. I went to pick it up at 9 AM and didn't get back home until noon. my loaders had to be at work at noon. I had to pay extra people because it threw everything off a day. to load the truck. I will never go back to Pixley. I should be compensated for all the time and Labor that I was OUT.

Cust. Serv. was horrendous , their comp. n printer were a joke. I had to use my camera phone to actually get a receipt when I left. They sold marihuana paraphernalia ! Clerk had limited English language , will never go there again..use cash if you have to go there . I would not trust my credit card info there!!

Alex was super nice and went out of his way to provide an excellent customer experience. I hope he knows he is appreciated for his customer service skills. Thank you Alex!!!