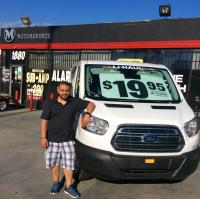 Jessie the owner was fantastic. I needed a different size and he tried his best to help me. I will return to this location for u haul because of him.

The many employees were not wearing masks, indoors nor outdoors. Hard to find someone that could help me, as they were more interested in the on-site business. I had already reserved a van and checked in, but it took 20 minutes to drive off site. NO ONE COULD FIND THE KEY THE VAN! Turns out the key was n the hail box but know one had a key to get it out. They had to use a coat hanger to get it. Upon returning the van, there was no place to park so I had to park it half way down the block. I asked the guy who helped me â€œWhat do I do when I bring it back?â€ He said just put the key in the box. I was ready to do that but when he saw me he asked me about the gas and mileage. So I had to go all the way back to get that. NEVER AGAIN. Stay far away from this dealer.

They have only 1 van which is cool it was just what I needed. If you blink you'll miss the location. They're a rim/tint shop in which they share with a mechanics shop, etc. on the same property. But, they are an authorized U-Haul dealer. Eddie, the owner, is cool. Jesse is nice as well. Nice, friendly, guys, overallðŸ‘

The on line process was not smooth. Although I had completed the reservation etc. 2 days prior, the location had to reinput data inc. payment. The uploading of truck condition, inc. photo was not easy.

I was scheduled for a pickup at 8 AM. When I arrived and tried to do contactless pickup, the app told me to return at 10 AM when the store was open. When I returned to pick it up, they were completely unorganized. They brought me into the store, both employees not wearing masks. It took about 30 minutes for them to check me out. They gave me a truck that had no gas in it because they could not locate the key to the other truck. They also didn't explain the contract to me that the tank had to be 1/4 full upon return. Then we had much less time to prepare for the movers coming. This was my worst experience with UHaul and it continued again when trying to drop off the vehicle.

There was no wear to park the truck on site. I called the location and was told to just pull in and leave it in the middle of all the cars. When I pulled in and had completed the drop off process on my phone some guy rushed up to me asking where I came from and where I got the truck. He said a truck had been stolen and he wanted to know if I had picked the truck up at his location. He told me to wait inside and I told him I already completed everything on my phone. He wanted proof (which is fine) and ended up taking my personal information â€œjust in caseâ€. I felt super uncomfortable and he wasn't wearing a mask.

Sanitize the van yourselves.

Our pickup time was 10am. We got there and were ready to do the pickup process using my phone but weren't allowed to leave till the owner got there 45 MINUTES LATER. Then when he does get there he takes his sweet time chatting with the guys who work for the motor sports place. He wanted a pic of our driver's license is his reasoning yet the app had that already. This was incredibly unprofessional and i will be sure to tell everyone i know in Pasadena to never make the mistake of supporting that assholes business. He never even apologized for making us wait 45 minutes and it fucked our whole schedule up. That location shouldnt be listed on the uhaul site its an embarrassment to your company

I was not properly checked in and the person who gave me the keys did not check on this. This caused a big problem and took forever to resolve forcing me to have to wait around and I was uncomfortable with the lack of distancing in some cases (I had to go in a small office to work with the office clerk and a man stood in the doorway very close to me). Unacceptable in these times when we need to be ultra-careful! The van was dirty inside and out and probably not sanitized so it was a good thing I brought my own spray disinfectant. The clerk, although she was nice, came out without her mask at one point and the guy who gave me the key (who it turned out was not even a Uhaul employee) did not wear a mask at all. Overall, a harrowing and unpleasant experience and extremely unprofessional and I will avoid using Uhaul if I can help it in the future.

Service was Excellent. I felt taken care of for sure

My original reservation was cancelled by email. They also had changed my location was also changed. The individual at this location was extremely helpful I order to get me a rental, because U-Haul said they were â€œsorry, it's the holiday seasonâ€ and we have ki more trucks. My rate was also higher with my new reservation, which seems very unfair. I will not recommend U-Haul to anyone or use them in future moves.

I rented a van for one day. I returned it a couple hours early and more gas than I picked it up. After I returned it the people at the rental location misplaced the van (then ultimately found it 7 days later) for which they are attempting to charge me for. Shady.

I reserved 9:00 AM pickup with truck share 24/7. When I arrived at 9 the app told me I couldn't pick up until business opened at 10:00 AM. I returned at 9:00 AM on Monday. App allowed me to process return but there was no key drop or instructions regarding key. If you advertise 24/7 pickup and drop off you need to have a 24/7 method for handling key, or use remote lock/unlock.

Hi, It was a very bad experience in renting this time, spent more than half an hour in the desk due to her un-professional registration procedure. and today I found she overcharged our renting. I have taken the picture of the milage and the fuel tank when I got the key yesterday evening. The starting milage is 542 mile instead of 539 mile, and the fuel is 75% full only. I have reported to the casher in the front desk when she input 539 miles, and she said it is okey, she check every morning. But actually we started renting just half an hour before her closing. I took the picture before driving. So please modify our charge.

This was not a U- haul dealer just a car parts place. They only had 2 trucks and the man who helped me had to call for help. So it took awhile to get the truck. I returned the truck after-hours and there was not a good system for returning the key and parking the truck. I was unexperienced with the online system and would have appreciated more directions on how to use it. Though the staff was courteous and kind when I picked up the truck.

Send them anywhere but this location. I received terrible customer service and an under serviced vehicle with broken headlights.

I had an appointment to pick up the uhaul at 10 when it opened, it was almost 10:30am when the person in charge finally showed up. I was too return it at 2pm, returned it before 2pm, the guy was not there, one of the other guys there told me to take a picture of the mileage, which I did, and he said to leave the key there, that the guy in charge would be back soon, and he would close it out, and email me an invoice, I've yet to get an invoice!

Central reservations sent me to this location. The whole experience was terrible. UHaul needs to get their reservation system and partners on the same page. Still pissed off. As often as I rent vans, I'm going to start looking for alternatives. UHaul is really bad, in everything!!

The place tried to hel me nicely but not beinh a uhaul dealer, uhsul system was aboslutely horrible and wiuld not rent from them again

My pickup time was 10am and the place was not open. The salesperson showed up at 8:08am and never apologized for being late. I had been switched to this location so had originally been scheduled for the closer U-Haul and was to pick it up at 8:30am so I was already later in starting. The salesperson had no customer service skills at all. He also said there was more gas in the vehicle than there was even though I specifically asked him to verify that there was less than half a tank! I never got a paper contract since he said it was going straight to my email address. I do not have a smart phone. I would not recommend this location to anyone and would not use it again, myself!

The UHaul rep never showed up on pick-up date. A person unrelated to UHaul but working at another business at same location helped me to take possession of truck (helped with contract over the phone and gave me keys). There were no blankets in truck and no lock to secure the back after loading it. I had to buy a lock. We were unable to open the gas cap with key provided when we tried to refill gas tank.

We reserved the truck for 8am and it was changed last minute to another location and NOT for 8am but 10am. We were two hours late for packing the truck. Also, the person at the store was not there at 10 am but 10:15am.

The Gas tank was completely empty yet I had to return it with a 1/4 tank of gas. The staff at the Location are not very professional in my opinion.

Worst Uhaul experience I've had, out of five.