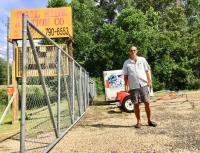 Mr. Woodham was very helpful. There were problems with UHaul computer works getting the truck checked out. It took almost a hour to do so, he finally got authorization from the area manager. I had done the online check in and already paid.

Not have taken over a hour for me to get a truck. At this location the guy running it had no idea how to run a computer system. He was completely lost. I got to his location at 12:25pm and left is location at 1:45pm.

First time renting from a uHaul in this area. Very kind and helpful.

Representative called within one hour off pickup to find out why truck was not returned. We had just picked truck and was over 300 miles away and did not even have for 3 days. Representative need training on uhaul system. At drop off he stated that he received an accident code for truck which was inaccurate. Rep need training on Uhaul system. Finally truck was returned a day early but we were charged $24 becay truck was not returned on half of take although it was one notch below half tank. That could have been waived.

I reserved truck until 5:00 and he harassed me when I only had the truck for an hour saying he wanted to go eat with his wife. My son was with a baby sitter that had to leave to go to work at 6. I had to drive to Enterprise to get him and I told him I was 10 minutes away and got there 12 minutes later and he wasnt there and my car was locked in the gate. He told me he would call me at 6:30 and I had to go get my autistic son. After crying on the phone bc I needed to go pick my son up he told me he was in Dothan he couldn't come but then pulled up in 5 minutes when I complained. Then we get there and I couldn't even get out the truck his wife was in their car and had and attitude and said "u ain't gone make it" and I was on the phone and didnt understand so I asked her what u mean? She said "u told my husband u had to go get ur son at 6." As if I was lying. And when I told my mother in law I would call her back while asking my boyfriend to help me down bc I'm pregnant and short and I didnt want to fall. The man yelled at me not to start. Then my husband put all our stuff we was putting in our car in it and told me to be quiet and get in and we went to drive away and the man screamed I told u to fucking wait until I checked this truck in". And then starts cussing him out about it. And i was just amazed at how we was being treated. And my I will NEVER go back and I will NOT recommend it to anyone!!! Verbal abuse and I feel it was a race thing bc I'm white and my husband is black.

Mileage was not correct with paperwork when I picked it up. I assumed they were not going by the decimal since the number was rounded until I got back and was charged for some mileage put on it before I rented it. I rented the truck for less than 24 hours but was tickled and filed to charge me as much as possible. I paid $198 for renting 24 hours and I've never paid half that much. Fees were doubled bc I brought it back later than estimated. I even called early that morning to notify of turn in time difference. Charged me double anyway for a few hours difference. Bed of truck and ramp were filthy upon pick up and I had to clean it out or he would've charged me for turning it in like I received it. Very dissatisfied and will drive miles out of the way to never use him again.

Everything went well besides the computer system having issues in being able to process the rental. The person had to keep calling the hotline for help.

The owner of the property has no idea what size tow hitch was needed for the trailer. He told me it was 1 7/8. I told him I knew it was a 2 inch. I then drove 40 min round trip to get a new one which I didn't need because my original one fit.

You changed our pick up location the last 2 times that we used your service. You sent us past many UHAUL s that had what we requested to a place that was 45 min away. I will not be using your services any longer. I will post on market place for help in the future. This has been rediculous. You dcan call and speak to me about this if you would like. 205-310-8981.