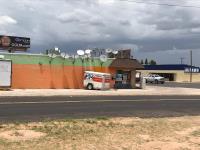 The owner of this satellite pickup place, which happened to be an actual dish satellite store, was extremely rude. I was frustrated with all the hoops I was having to jump through to rent the truck. I thought I'd just show up, give them my ID and credit card and that would be it. But it wasn't. Had to take pics of my DL and upload them to a Uhaul link and then provide 2 contact persons that they could call to verify who I was. Needless to say, this was very frustrating to me and I made a comment about all the hoops I was having to jump through. They explained that it wasn't them making the requirements, but Uhaul. I made another comment and that's when the owner went off on me. He started cussing at me, calling me names and making derogatory comments about me to his wife. He threaten to throw me out of his store and to call 911. At one point, I feared for my life and thought I might have to call 911. If I hadn't needed this truck so badly, I would have walked out and I should have. I really thought this guy was going to attack me. His ranting lasted about 10 minutes before he left the area and started angrily walking around the store. They did not load my blankets and dolly into the truck. Had to do that myself. He finally left the store completely and his wife finished up with the rental. Another issue is that online, Uhaul only gives options for ordering moving blankets by the dozen, so I ordered 2 dozen. They only had 18 blankets. I also ordered an appliance dolly, but they called 2 hours before pick up to say they only had a utility dolly, no appliance dolly. I ordered this truck on a Wednesday morning and picked it up on Friday evening at 5 pm. Why did they wait till 2 hours before pickup to tell me they didn't have an appliance dolly. I will never use this location again and suggest if anyone else does, keep your mouth shut.

Great experience no need to change anything

The parking lot was way to small

Be more organized, not mess things up in the computer. We were suppose to get our truck at one location and it didint show up so we had to drive 30 miles for another location to pickup the u haul, and then back to another town to get the tow dolly and they still messed it up in the computer

The staff was very friendly and helpful throughout the process.

this location does not specialize in uhaul - its a satellite TV store!!

Avery thing were great except that the lady was alone and for that was not a fast service.

dropped off truck on 12/1/19, was billed for extra day when truck was not due back until 12-3.. also was charged for extra fuel that was not required. and agent was snobby about the blankets not being in original bags.. was never told they had to be? agent was extremely rude and not helpful.. will possibly not use uhaul again. 4th truck in 6 years.. .

I believe it's preposterous to pay $893.20 for three days--especially when I only needed 2 days. I had no choice but to pay: I needed the truck to move my son from Odessa to San Antonio. I hope you feel financially more secure because it sure has soured my earlier respect for your company. Richard G. Martinez

There was no customers before me but the lady had me wait 10 minutes before I was helped.

Representive didn't know how to do her job

Location was very unprofessional, messy, and hard to get in and out of. The lady was also very rude and snippy. I will never use this location or recommend to anyone!

Nothing against either location overall. The vehicle you rented me however, TERRIBLE. How is a truck with 130k miles and 30 plus scratched/dents still in service? The cab of the truck was so noisy I had to wear noise canceling headphones. I would not recommend U-Haul ever if this is the equipment you rent. I've rented Penske in the past and for the same price they have nice, clean trucks with cruise control.

The contract stated that our return destination was Brady which was 12 miles from our destination. On the day of the return I received a text message saying the return had to be in Early which was 45 miles away. I was luck to receive the text since service in that area is very weak. I did not get to do everything I needed to on the move since I had to travel so far to turn in the truck.

The lady who checked me out was very concerned about my safety when traveling with the uhaul trailer. She reiterated a couple of times about checking the hitch everytime I stopped to make sure it was still secure and she told me a few times to be sure not to speed.

They don't open until 11am!!! When people are packing to move they want to start early not mid day.

The woman was rude. She called and asked me to come late. When I told her that wasn't an option she told me to be there at 10:00 sharp and then didn't show up til 10:20. She didn't believe me when I said I had used the early check in and already paid even though the computer confirmed this. It was an extremely unpleasant experience. The customer service was horrible.