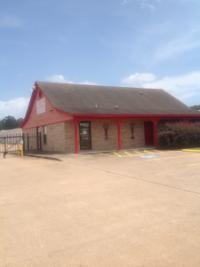 Keep your great customer service up.

24/7 Pick up was difficult and was not helpful at all and I had to return the location the next day to be verified. I gave a notice that it would be dark when I would arrive to pick up the truck and I was told that would be okay. However it was not fine because I was unable to pick up thr truck, and I had to wait 20 minutes. Before speaking to someone, the process took to long and I was not able to complete. The various things that I needed to complete while I had the truck because of the amount of time that I had to wait in order to get the truck.

Your customer service department put in the wrong drop off location ... again and I had to drive out of my way to drop it off

Went beyond to help!

They are rude and not friendly.

U-Haul's online rental system is a nightmare. It took us an hour and a half to rent a truck. Thank goodness for the helpful person at this location and the district manager who finally got us rolling. Ask me how many stars I would give the U-Haul decision makers who decided this process was a good idea.

Location was great. Customer service at the location was really good. However people who already have a uhaul.com account it does NOT let you add the additional information or even let you pick up the truck. It says contact assistant at the pickup location. I was on the phone going round and round with the U-Haul customer service trying to explain this.

Returning the U haul was easy to do and the staff was friendly and professional at that location.

Apparently this location does not do drop-offs very often. What should have been a quick drop off turned into 25 minutes. Personnel was not familiar with how to process the paperwork. Other than that, the property was clean and the personnel were friendly and apologetic about the wait.

I showed up at 9AM on Sat 22nd to pick up the truck at Precision Auto Clean in Nacogdoches TX and was told they did not have the 15'truck I had reserved. They did not apologize and said they would check into it. 10 minutes later they told me my reservation had been transferred across town to Black Lock Storage. Again no apology or concern for the botched reservation. I then drive to Blacklock. They did have a 15 footer, but still no apology for the botched appointment. I finally left with the truck around 10 AM. When I returned the same day, after they had closed, I checked in the truck through the app. It showed I had rented blankets which I did not. I called customer support and said I had no blankets. Still on apology for anything. Oh and the dolly I did rent had a bad wheel. Overall, this was a disappointing exchange!

Had a 10 foot truck reserved but upon arrival there was not one available. The agent arranged a larger truck at the same price which satisfied my move plans.

The sales lady, Robbi Babbitt, was excellent. Please give her a raise in salary.

After calling several moving truck places, I was unsure what I needed or could afford. Then I called Blackbox storage and Robbi helped me through the process of selecting size of truck and time I needed it to get my daughter moved. When I got there, she had everything ready to go. Thanks again for making our move easier.

Truck was very damaged when picked up. It was old and had very high mileage. Personnel tried to avoid inspection of the truck so I could point out damaged areas, presumably in order to pass on repair expenses to me. Truck had 3/4 of a tank but we were instructed to return it full. When I mentioned that the truck was not on full, I was met with exasperation and complaints that they would have to redo all my paperwork. Since it was taking so long already, I just let it go. Personnel was annoyed they had to help us and did not know how to attach the car tow (they admittedly had "never done it before"). My vehicle nearly fell off the car tow into traffic because it was not secured correctly. I eventually stopped at another Uhaul location where the vehicle was properly secured. I understand that Uhaul is trying to make its rentals more accessible by allowing more locations to rent Uhuals as an ancillary part of their business, but the quality control is taking a nose dive.

The manager was very helpful. Despite internet being down, she helped us rent a truck via a call to her field manager.

Guy who gave me truck was very nice and helpful. However ... They told me gas was "full" and to refill it. I drove 15 miles total in the truck. Took almost 7 gals (almost $17) to re-"Fill" it. Something seems a little fishy about that......

The Nacogdoches Co went out of their way to help a mover in need.

We were originally told to pick up the trailer at the 14th & Conway location. They weren't open at 9:30 AM so we had to go to an alternate location which actually had a newer, nicer trailer in the size we wanted.

Truck was not in condition to be rented. After one hour, we had to pull over and wait for 3 hours for Uhaul service to come and replace BOTH front tires.