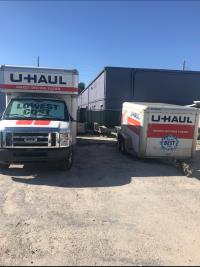 Customer service was poor and the sales associate was fixing phones upon my arrival, I wasn't greeted and I was told to park at Walmart. The vehicle was not inspected.

The representative who carried out my transaction was very professional and amazing.

Was told to go at 7 am ended up getting the truck at 10 because they were not open even though they said it would be available. The girl working at the store was phenomenal though

They don't sign you up to rent the truck there , everything it's by phone when you get to the store they call someone and Idk who was .. They ask you 4 everything but I dnt give then my card information by the phone I choose to pay cash.

This is a small storefront store in a tiny shopping plaza. they are not capable of being a UHaul outlet. The pick up was scheduled for 10:00 am. A person didn't show up to the location until 10:15. No apology for being late, nothing. I was not shown or asked to sign a contract or given any explanation about rental obligations. Just handed the key. I had to go to a second location to pick up a hand truck before going to my final destination. I returned the hand truck and rental, put two gallons of gas in the truck to cover the gas used. I handed the key back. Again not asked to sign anything and there was no inspection of mileage of truck. The person behind the counter was busy with customers. i just wanted to leave. Yesterday I received a bill with a $63.75 fuel surcharge. The truck was at half a tank when I received it. It was not full. I was charged for filling the tank. I put in a separate complaint. This location is a joke. I demand that this charge be taken off my bill and I receive a credit.

No one really greeted me. The person responsible for giving me the keys was not there and some other person who didn't know what was going on had to help me. She said she didn't have anything to do with the Uhaul rentals. She gave me the key and I had to ask to please show me where the truck was located. After drving off I noticed that the truck had a flat tire which I had to fill with air 6xs during the move.

this company abuse of its customers. I had to pay twice rental charge because the agent on Heat Wireless location (048573) doesn't inform to the customer the terms and conditions about picking up and returning the truck. Missing information is an abuse of the companies!!! Contract 22337274 on 16455 NE 15 Ave Miami Fl 33162.

Did not receive the level of customer service I expected. This was the only place in town that had the trailer I needed, so beggars can't be choosers, I guess. When I checked the trailer out the cashier / tech / whatever, didn't seem like he could be bothered to help or offer advice at all and was not very friendly to boot. I had to drag the tow dolly over and hook it up myself. When I returned the trailer I talked to a different person who was very friendly, but I still had to unhook the trailer and put it away myself (well I said I would do it, but he never offered, still he was at least friendly). My advice is too plan ahead and avoid this location if possible. If you are in a pinch and they are the last place that has what you need: suck it up and be prepared to do everything yourself.

We were never called to confirm appointment, we were given the wrong truck, the fuel amount was incorrect, then we were billed for use of furniture pads and hand truck which was not even in the truck when we picked it up.

Took 30 min to check in after completing early online checkin. Vehicle was not clean. Then when I returned it, I was told They could not give me a receipt becasue they just shutdown the system and would have to email a receipt which showed up in my email as soon as I got home 45 minutes later. I was charged for a double rental, charged twice for a hand truck and pads that I did not use. I will not use this location again and seriously doubt I would use Uhaul again it this is now its charging practices.

First the place of pick-up was changed and I received NO email or phone call notification. We reserved a furniture dolly and a appliance dolly. We were told they had no furniture dolly, and then we were told that the appliance dolly was in the back of the truck, after driving 6 miles out of our way round trip, we discovered NO appliance dolly. My husband called the location and basically was told sorry my bad but I don't know what to tell you either bring the truck back and I will put it in the truck or have your wife bring her car and I will load it. So now we are 12 miles out of our way to pick up the dolly. WE WILL NEVER USE U-HAUL AGAIN...I have never had such crappy service. Needless to say this put our move 2 hours behind schedule.

Not very friendly though.

Was charged $7 for a hand truck that we never used. We assumed that there was a seal on it when we picked up the truck but never saw a seal. The next day we got our bill and saw the $7 charge. I went down the next day to show them the extra charge but was told there was nothing they can do. This is a trust issue. Someone should make sure the customer checks for seals before accepting the rental truck. I realize its only $7 but its a small price to pay to loose a customer in the future.

I called this place after looking it up on yahoo and reserved a truck. The address was incorrect on yahoo, so I thought it was very close to my house. The next day when I went to get it, the place was not there. Another place next door offered to rent me a uhaul since I found out that MTA was far away. I called to change my reservation and was told I would be charged $50. So I kept the truck at MTA and drived much farther, costing me more than I should have paid. My husband went to pick up the truck and even though I told the guy on the phone that I did not want insurance, he told my husband I did, so we got charged for that. 2 days later I got a call from the other place I had wanted to rent from and he said that the guy from MTA came in making fun of me by saying that he got me to come get the truck by threatening a cancelation fee. That was humilating. I never recieved a confirmation call, I never got a reciept. My bill which should have been around $30, cost me $55. Unprofessional crooks!!!!!

The lights hookup was not checked before I left the facility and I discovered later, when someone drove up beside me and clued me in, that the brake and turn signals were not working on the driver's side. Being by myself and having no tools, I couldn't fix it. Luckily I got through the trip without a ticket.

When a businesses location changes an email or other notification would be good to let anyone with reservations at that location know.

I Rented the truck at another location and was called at 4:15pm the afternoon before I was to pickup it up that I would have to pickup it up at another location 8 miles father away which cost me about $10 more in mileage charge. I dropped the truck off on Sunday night which they said we could do since they closed at 4:30pm on Saturday. My total mileage was only 17 miles (period) from pickup to drop off and I stopped and put $5 worht of gas in to cover any gas used about 1 1/2 gals. They claim on the reciept the the gauge read 1/4 but it was at least an 8th over that and was a least the same as when I took the truck. They charge me $38.09 for gas on the bill. Even a 1/8 of a tank would not have been $38.09 dollars worth of gas. ("17" miles) from pickup to drop off and I had to drive father to get the truck than I had planned. I would like a refund on the fuel charge, I put gas in but even if I didn't 17 miles should not be $38.09. Please call me I have tried to call the number on the e-reciept 3 time with no answer that number is 360-993-2800. My cel # is 360-772-9271. Steve Parks

Have the person I'm renting the truck from do the vehicle inspection with me to ensure we agree upon physical quality of the truck. My truck was due back on a Sunday and I was not informed that they would be closed...so it is important to relay that message and also the SOP for turning in truck, key, contract etc. when the office is closed.