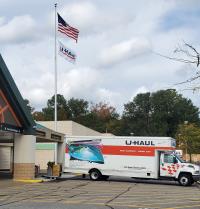 To whom this may concern i rent a truck on saturday of last i really wasnt looking foward to paying that amount for service i had the wipers need to be replace i could'nt see the wiper blind need too be relace on driver side the truck need wheel aligment it was like i was all over the road and i told both of the young ladies about the situation i was very dissatisfy with that truck,but i was still charge that amount of money. i just was'nt happy @ all but i need that truck that day because i was moving.

First, I want to express appreciation for being able to rent a really nice truck in one city and drop it off in another. The day we moved the furniture it rained hard all day, and having an enclosed truck was a godsend. Service at the pickup point was not what I normally experience. When placing the order online, I had checked reviews and someone complained that they had to drive to a different city than they requested because the truck was not available by the time they got there. After placing my request, I called the location in Pine Bluff to make sure the truck would be available. The woman I spoke with seemed put off that I was asking for confirmation that the truck would be available as requested. All she would say is something like the order is confirmed. She informed me they could not supply an appliance dolly, because all of them were booked, so I said I would handle that at my end. I called again the night before and was told again the order was confirmed. I called the morning we left to make sure we would not drive three hours and have no truck, and she seemed to indicate the truck would be ready at the requested time. When I arrived to check the truck out, I waited 40 minutes for the people ahead of me to be serviced. The fellow who checked me out was amiable. As I left, I asked about furniture pads that I had reserved. He said I could pick them up at the door and asked me about the furniture dolly. I explained that they had told me they did not have one, so I brought one with me (that I had rented from a U-Haul in my home city.) Seeing six pads in a bag, I took two and headed for the truck. He came out and told me I could take only one. I returned one bag, went back to the truck and got the contract, which showed I had reserved a dozen pads. Then he let me take the second bag. At this point I had burned an hour out of day that had little time to spare. I get the impression that the customer service reps were not paying close attention to details, and I got the distinct impression that the lady I spoke with three times did not want to answer my questions. I will probably use U-Haul in the future, but I will check the contract more carefully before leaving the store. I am hoping that U-Haul's system does not think I owe them an appliance dolly.

Both young ladies were polite and courteous!!!

We originally reserved for the Bartlett location. Got a call that the trucks at Bartlett were frozen and that I needed to pickup at the Raleigh location because those trucks were not frozen. This actually added more miles to my reservation. Got there Saturday, the truck was frozen, was told to enter the passenger side and slide into the driver side. When I asked what do I do about the ice on the steps when I get fuel, she said we don't have any salt. I asked what do I do about the ice on the truck, she said just sit here and let it warm up. I had to call customer service to get help from the personnel to scrap the ice from the uhaul. When I returned the truck I had to stop there to help get the ice off the gas cap to go back to the gas station to get fuel. Extra mileage again. Worst experience ever! More money, more time sitting there to defrost the truck, yes they added time to the rental, but that did not help when I had a team of people who took off that were waiting at my apartment and were mad and upset waiting outside in their vehicle for an hour. I did not need the extra time! Ridiculous waste of extra mileage added onto my rental as well as fuel sitting in the parking lot to defrost the vehicle when this should have been done before I got there. It took almost 45 minutes to defrost it!

My equipment rental was satisfactory, the lady who handled my rental and equipment return was not. She was very rude the whole time and felt the negativity she portrayed was racially motivated. Overall I do not think she is a good face for uhaul treating customers the way she does.

The two young ladies working there on 2/14 were exceptional!

Keep up the awesome work; thanks so much!

Staff very unprofessional & on top of that I believe there is a little fraud going on because I have never been charged so much at any other location.

Very unorganized. Spent most of my rental time going back and forth with the rep

Make sure the rental boxes are clean from previous renter. Most of the boxes were clean, but whoever used those boxes prior to me did not clean a few out as they had food crumbs and dead stink bugs. After returning the boxes, I found one of those same bugs crawling on my front seat 2 days later. I hope I didn't bring anything to my new place from those boxes.

Upon renting a cargo van today at the Austin Peay Hwy location I was informed I needed a major credit card for the rental deposit which it would have been nice to know before placing the rental order. The Uhaul agent that made the reservation over the phone for us never mention a major credit card was needed. I'm glad we had one, additionally, my cargo van was muddy as heck on the outside, however, I did witness the employees wiping the interior down once the vehicle was returned.

The location was fine. I booked on line and it had me scheduled to pick up at a totally different location. Then the young woman checked the system with no truck available for one way rental until I asked her to check the unrestricted truck keys that were hanging behind her. Then she changed our contract and cancelled the other one. We had to register and then got a smaller truck but one non the less.

Every thing at this location was very good

I had a great experience. Keep up the good work!

Everything was fine until I had to return the truck. The self 24/7 app kept starting over and would not let me return the truck through the app. For what I had to go through I will just go and do everything on the inside from now on.

Nicole Crawford was very pleasant. She greeted everyone with a smile on her face . She was professional at all times.

Not all defective items was listed on app. I had to walk back into store to tell them something they already knew. The Associates in the store were Awesome. Made it an easy transaction. My props to them all.

The forgot to give me my dolly. Also the connector on the tow dolly was a little rough.

The alarm in the office was disturbing. Besides that everything was perfect.