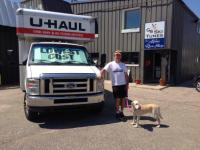 Windows were filthy on the inside had to clean them before we left,other than that everything was perfect!

There are no boxes, packing supplies, or anything else that would help with the moving process. We had to go to another location to buy boxes and packing supplies. That was annoying and inconvenient.

Nothing. Great experience. I recommend this location to everyone. Thank you for making my first moving truck rental so painless.

This was AWFUL. My experience was great to begin with. After I dropped off, I found I was charged double for my mileage. I talked with customer service multiple times, asking to have a field manager call, only to never get a call and find my case has been closed after never hearing from the field manager. When I called customer service again. I was told NOTHING could be done after I had proof through google tracking my phone of where I went and the mileage. I was disappointed to learn this, thinking I would have a positive outcome. I have had other companies go above and beyond over less and find your response unacceptable and disheartening. If this is to be what others can expect, I recommend going elsewhere.

Car dolly was in very poor condition. Extensive damage to one fender which appeared to be from a bearing failure. Extensive chafing on inside sidewall of tire adjacent to damaged fender. Tie down strap on same side of trailer was abraded and broken from friction. Was able to effect repair by melting holes thru three ends of strap with heated screwdriver and bolting them back together.

Signs in truck say you need to sweep out truck. It had leaves in it when we got it. All of the blankets we rented were full of leaves & dirt too. The worst part was that the key wouldn't come out of the ignition in the middle of our rental. When I called to let them know I was told to drive to another UHaul dealer to get it fixed. It's expensive to fill it up with gas so we had to drive more miles, waste more of our precious time and ultimately pay for gas & mileage b/c of bent key. I really just wanted to bring it to the lot when we were done and leave it for the owner. Instead we paid more money and wasted more or our time. Reality might be that it's not a great thing to have to rent a truck.

We NEVER got a receipt when picked up or dropped off. Not a good business transaction in y opinion

Scott at GS Ski Tunes was available promptly for pick-up and return. Equipment was in great shape and the whole process was a breeze! Highly recommend this location as a UHaul service provider!

We had a 20' truck and it was parked in front of a dry cleaners that was never listed on the email instructions for pick up. A car cleaning business was mentioned and the GS Ski Tunes was tucked between two two buildings a few businesses down from where the truck was parked. It was like an Easter Egg hunt trying to find GS Ski Tunes that had the key in lock boxes by the front door. After using the code given we weren't able to open the lock to retrieve the keys. A staff person from GS Ski Tunes came out and assisted us, finally we retrieved key only to walk back to the truck at the location a few doors down to find there was a lock on the back door so we couldn't even open it up. We called U-Haul and were on hold, transferred to GS Ski Tunes in which the staff there was rude and implied we were lying that it was locked because he personally checked it the night before. He was getting loud on the phone, cutting me off and I finally had to say "I am the customer". His customer service skills were awful when under pressure/stress. I had to go back to another location, West Towne Mall Madison on Platte Dr., where I needed to take the truck to have the lock removed. I arrived and the lock was removed. It was indeed locked. The entire process that was both online and in person was 1.5 hours. This included the wait time on phones and hunt to find the location with lock boxes.

U-Haul needs to update their system, as his shop is only manual pickup. We were told by U-Haul that we could go at 8 am, but he did not open until 9 am. The owner of the store was very apologetic on behalf of U-Haul and kind, but it's frustrating that they aren't on the same page. Since there isn't a place for overall feedback, I will also say that we had numerous issues prior to pick up-text received at 5:30 am telling us that the truck we ordered a month prior would not be available for our 7 am pick up. We couldn't get ahold of anyone for some time and we're on hold for many lengthy periods. Numerous issues and misdirections given. We ultimately ended up with a smaller truck than anticipated and two hours later than we were supposed to, which left us rushing and having to make an extra trip since the truck wasn't big enough. Would not recommend U-Haul again.

Had trouble with the after hour checkout but the owner of the shop came right away to check me out so the whole thing only took about 10 minutes!

This is not where I had the trailer reserved. It was changed unilaterally with little notice.

Supposedly the guy said they were not open. But the site says that they were. He was doing some personal stuff he said.

Nobody was staffed at drop off location. Returning via phone isn't easy when it was your first time renting a uhaul.

Service was the worst I have ever experienced. No show for rental , 6+ phone calls to clear up billing issues, acted inconvenienced. Asked us to come in to clear up issue and was to on site when we arrived(20 min). We called to ask? Stated he didn't want to wait!? Waste time, gas, energy. So unsatisfied. I do not recommend using this site for U-Haul rental.

The owner was impossible to reach. The dolly wasn't present in the truck. I had to travel to a separate Uhaul store who could only loan me an appliance dolly. There were not clear instructions on how to pick up or return the truck.

I would recommend this location if you have no other options. I was rerouted to this location from the original location (522 W Platte Dr Madison, WI 53719) where I made a reservation. I arrived and he was not available. I had to wait outside for 30 minutes before he arrived. Upon arrival, he is friendly and conversational. After the transaction I did not receive a receipt. I had to call U-Haul customer service 6 hours later for the receipt. I suspected something is amiss, but I could not prove it. I was charged for insurance, but I DID NOT REQUEST for insurance. The previous location (522 W Platte Dr Madison, WI 53719) put insurance coverage on my reservation without my consent. I did not notice it because the newer location (GS Ski Tunes 6810 Watts Rd Ste 104 Madison, WI 53719) did not print or email me a receipt. Overall the guy is friendly, but before you take ownership of the truck, ensure you get the receipt and look over the receipt throughly.

The contactless check in is horrible and takes forever. Plus if you ever get stuck and need help (like I did twice- once cause the app couldn't find my location and once cause the dolley I ordered was not in the truck) sit on hold for 15 minutes before even getting to talk to anyone. It took me 1 hour to finish the check in process for the truck. That's insane.

Send a message to the man who owns the store for the pick ups of the day. I waited one hour paat my pick up time to get the truck and when I got back to return it the owner was not there. The app also did not work to make the return online. I certainly hope that Uhaul does not charge ne with late fees because I have returned the truck at the date and time I was supposed to and there was no one to receive it and the app did not work.

There were multiple problems: 1. I registered for the downtown Madison location and my reservation confirmed me to this far west side location. 2. Rental agent at ski shop was embarassingly unprofessional. He threw a temper tantrum, directed at his U-Haul rep and made me feel very uncomfortable and an imposition on his more important priorities. 3. I was charges twice for the rental.

Truck was broken and the roadside assistance was terrible. Wasted over 2 hours because the truck wasn't in proper working order.

Everything went smooth. Uhaul people took care of everything. T