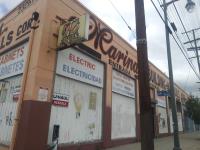 Pick up was easy. Staff was friendly and competent.

There was no price disclosure. Truck is $19.95 but somehow I end up paying $195 without a thorough explanation of the fees.

First I was told that I could pick the vehicle up at anytime. I arrived at 11pm by Uber in one of the worst areas of downtown LA. I've been all of the world and been exposed to some bad areas. When I got out of the Uber to try and get the U-Haul I instantly became very nervous. I saw groups of sketchy people in 2 different areas. I would not recommend to anyone to go to this area during the night. To make it worse I was unable to get the U-Haul and had to come back the next morning. The people that worked at the pickup location were very nice. But this area is bad to say the least. The U-Haul only had 1/2 a tank of gas. When I returned it with a full tank they said they wouldn't compensate me for the difference in gas. About $40 worth.

This entire experience was an absolute nightmare. My reservation was made weeks prior to the moving date. The day before I was told not only had my pick up location been changed, the time went from 8 am to 1pm. I was forced to pay my movers an additional hour because UHaul didn't have a truck ready at the agreed upon time. Kyle at the location department center was wildly unprofessional, and Lucy Ramirez was of absolutely no help either. I will never use UHaul again.

Where to start, first off pickup time was confirmed with the location for 7am and nobody was their to manage the uhaul counter until 0735am. Lady comes walking in with starbucks in her hand. Then she had no idea i had a reservation and ended up just taking a picture of my phone with the reservation on it, and a pic of my id and credit card. That is right her personal phone to take a picture of my credit card. They also did not have a dolly which was part of my order which made moving more challenging. Would never use this location again and strongly recommend nobody else too.

They made me pick the equipment in the location that is different from the original location when I booked the equipment.The vehicle was so stinky and dirty and no fuel at all.They said they can't register me because their system went down and get and send a paper later but I never received. This not ready to pickup equipment caused lots of troubles when I dropped off in drop location. When I called them from drop off location, They said we will call you back in 10 minutes after we find out what is happening but they never called me either.This not ready for me pickup and dropoff situation which is not my fault(I booked through website and i have all confirmation emails) made me go to dropoff location twice and ended up calling customer service twice as well.This is my first time to use uhaul and horrible and bad experience.

Being my first time ever renting a uhaul I didn't really know what to expect, but this was probably by far one of the worst services. I did not receive a contract. I drove it from LA to Santa Ana and returned it within 4 hours total. Not only was the mileage off by 200 miles, but the contract was not opened until after I was trying to return it. The return process took about an hour but the person who helped me return the uhaul was very informative and extremely helpful. And to top everything off, I was not told to return the tank with only an half tank so I filled it up half way. Overall it was a very disappointing experience that I did not expect. I don't anticipate needing a uhaul soon and as this experience was incredibly disappointing I hope never to need a rental in the future. Similarly I will make sure to pass this experience on to friends and family so that they do no suffer the same inconvenience.

I ordered a dolly, but it was not in the truck. Didn't matter as I ended up not needing it. Returned truck before 8 AM (less than 24 hour rental) but was charged for 2 full days :( and need a refund.

The truck was filthy dirty. The online checkout experience was awful, and long, and then the staff wanted to check my drivers license and credit card AGAIN! Isn't that the whole point of online? To avoid that? Overall, just terrible for both UHaul and this location too. Thumbs down.

I was falsely charged $696 when my total should have only been $44. While I was refunded eventually, it was EXTREMELY inconvenient because I am a college student that does not have much money, and I was literally broke for 2 whole days.

Just keep doing what you are doing.

The location didn't fix the return date correctly. We dropped the truck around 5:20 - 5:30 pm. but there was no one. Because of that we are charged additional fee. I already talked to the location asking to fix the issue. They removed the additional fee, but after two months I've received an email again saying that we still have an outstanding balance. Can you please fix this issue once and forever? the truck was returned the same day it was rented and picked up. The drop off location is right around the corner from our warehouse there is no way the we returned it on 21 or 22 of march as it is indicated in the order. Please remove this fee. Its not our fault that they haven't fix the return time correctly

This location just entered the U-haul rental business. Though there were trucks there to rent out. They didnt have thee electronic means to make proper transactions. Other than that everything was fine.