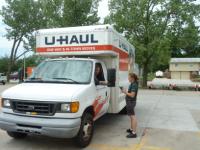 It would be great if U-Haul offered more sizes of balls for different hitches - I rented a truck specifically to tow a trailer but it turned out I needed a different ball size that U-Haul didn't carry, which stunk

I returned my truck over full from what it was when I picked it up. I also went 8 miles over contract which came to a total of $3.64. I asked for the $3.64 to be voided, since I filled the gas tank past what it was when I picked it up, but was told that "we can't do that." Disappointed that I fulfilled my part of the contract by making sure that there was enough gas as per the contract, and essentially paid $13.00 extra. Feel like you should fix this and reimburse me.

When a customer prepays for instore products, make sure that info is avalible for the clerk so they don't have to ask the customer the details. Please fix your system to alert the clerk that a customer is using a debit card in the front end of the transaction. that gives the clerk the oppertunity to tell customer you will be billed instead of placing a HOLD on your card. As it is, it only shows on the receipt after the transaction has completed. The customer should be fully aware of all options before deciding how to handle the transaction.

Very nice and helpful staff. It was so quick and easy to drop off the Uhaul trailer.

Not sure why you're charging me an after hours fee. All they told me was to drop it off before 8:00 which I did and then I got charged that extra 20 something bucks. I don't agree with that.

I cannot think of any improvements at this time. Both customer service reps. at pickup and return were friendly and professional. The truck drove smooth on the highway. Overall great experience. I've rented trucks from Uhaul several times over the years and I've always had a great experience. Thank you!

1) Had to return truck to location because the truck that was issued to me had a broken windshield that the location did not know about 2) 15 foot truck has very limited tie down places. Three wood strips along the entire side and a couple in the back. This is not enough. The United truck had tie down anchors running the entire height of the truck on both sides with about a foot apart. 3) The straps I bought were not long enough to hook securely on to the wood strips - the wood strips were about three inches wide and the hooks on the U-haul straps were about an inch. I was worried the entire time that the strap would simply pop off if I hit a bump in transit. 4) The location where I picked up the truck had only one way in and out. It was also extremely congested all three times I visited. YOU NEED A BIGGER LOCATION IN LAWRENCE, KS. 5) Both trucks I rented from U-haul had too much play in the driving wheel. As a consequence, it made the driving experience much more stressful than if the wheel was tighter (like a BMW type vehicle). I referred to the experience as "driving a boat." 6) No backup cameras. This nearly hurt me (and your truck) in Bend Oregon where I had to back the 15 foot truck and the 17 foot trailer attached to it into a very cramped parking area. Cameras should be mandatory on all truck. 7) Why the jump seat? I could have used the space in the middle between the two passenger seats to put household goods and have access to water and snacks and computer bags and luggage.

Good customer service. Required phone app which was intuitive. Truck (15-ft) seemed to be well-maintained and was easy to drive. Only downside of this location is that personal vehicles cannot be parked on premises. I would recommend U-Haul and this location to anyone who needs the services they provide.

It would be awesome if the mirrors were automatic from the driver's seat.

They forgot to give me the dolly and blankets I had reserved, and the fact that you can't park there for a few hours while you move is an issue that needs to be addressed. Other than that, they were great. Alex was helpful and accommodating through the entire process.

It was very easy to check the truck back in

Impossible wait times on phone. I could not call while out with truck, could not wait longer than 35 minutes, 1 time I was on hold 30 minutes and call was disconnected. Will not use again.

Always dependable and professional at this location .

Maybe more employes they where working hard and got it done

Very nervous/dangerous driving because the driver's side door would not fully shut or latch. Very noisy trip both ways. Only two hex bolts (no nut on either one) were holding the door. The passenger side door actually had a bolt in place which allowed that door to shut fully.

Not every customer is phone and app friendly.

Everything was handled in an efficient and pleasant manner.

My truck had a leak on a very rainy day and several of my boxes got wet. It had obviously been repaired once before. I informed the staff at the location about the problem.

I had an issue with a(male staff member, who did not wear a name tag) staff member who was the counter agent last Satuday morning assisting me with the trailer rental reservation. The staff member had little to no interest in the utilization of any customer service skills he obtained during training. His professionalism was not present, being comfortable enough to address me like I was one of his drunk friends. The attitude was very unpleasant and he seemed to be recovering from a hangover from the night before. I noticed that the woman staff member(s)were put in dangerous situations with the equipment, either to be hurt or become a liability to your company due to his lack of leadership My first experience at this location was not pleasant. FYI: The manager was very helpful, knowledgable, and courteous I would only recommend this location because the manager doesn't deserve to carrier the unprofessionalism of the one staff member.

Make the contract number bigger on the paperwork. It was tough to read it for a self-return at night without my glasses!

i had issues with the employee who was standing in for the supervisor. his name was Jeff. i actually called corporate about him because i was so disturbed by his lack of professionalism and his rudeness. apparently corporate told him he had to call me to apologize, which he did. however i have no idea if he is truly sorry or simply apologizing only because he was forced to. i hope he has sincerely changed for the better. the other two employees (one was named Stephanie, did not get the name of the other) were both very professional and courteous. i have rented from this location before and have had good service. i hope that the over-the-top-rude behavior from Jeff was isolated and i expect to never experience that again.