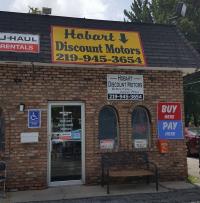 The customer service representatives need to be more professional. Also, I ordered supplies to make my move run smoothly only to get to the location and my supplies were not available. I was overcharged for gas called to complain was told I would have someone reach out to me to no avail. Just a bad experience ever.

#1 they didn't explain the process to use the link! Secondly I was overcharged fees for going locally...I was told it would be 34$ they ended up charging my card 127$...

The equipment we ordered was not available. They sent us to another location to collect and they did not have the equipment either. Very poor service. The location of the Hobart office is terrible. I felt unsafe there and it was only 11am!

Regional office needed to do a better job of scheduling trailers available at the location you rent from. I paid an extra $19.00 because the regional office did not have trailer in the right location. Called with less than 24 hrs to change pick up is not acceptable. Hobart was not the issue, it was the regional scheduling.

This location was great. I was originally supposed to pick up in Gary at Second a Chance on Melton Rd, the authorized representative refused to give me the key after I checked out truck on my phone he would not listen to you uhaul red who tried to tell him to give me the key. He called the police and said he wanted me off the property for failure to give him my drivers license. The police said I could be arrested for trespassing g and although they heard uhaul rep say give me the key and they could clearly read message on phone screen I was had to leave without truck. It took 3hrs by phone to correct this with an agent who sent me to this location. It cost me more gas mileage due to travel distance. I would like a district manager to contact me for further compensation and Uhaul rep should not have vehicles if he's going to make his own rules and threaten to have people arrested for renting equip that on his property. His reply when I refused to give him my ID a second time was, â€œthis is some bullshit get out of my store, I refuse to go business with you.â€ He would not contact Uhaul and I had to resort to using my cell phone. Please follow up with me at 219/292-1622

The lady at Hobart Discount Motors (I wasn't able to catch her name) was one of the nicest, most friendly, and pleasant people I have ever dealt with. We were moving my aunt out of state, and it was so good to deal with someone kind in an unfamiliar place so far from our home. We will most likely never be back in Indiana, but I would recomend Hobart Discount Motors to anyone that needs a U-haul rental.

Everything went well in returning. Uhaul is a great company

Everything was perfect! Thanks

I had to be diverted from my original pickup location to this one. Not only was it a later pickup time, but I then had to wait for a truck for an hour +, because of a mix up. Even though it was a complete debacle, the staff was very helpful, and accommodating.

They were very helpful and easy to get to and very nice to work with.

They should have vehicles in top shape before they send out with customers. Picked up van drove. 5 minutes down the road and the windshield wiper on driver's side. Was not helpful at all; told me to call 1-800 number. Also told they were short staffed. Not happy with their service at all. Then on way to drop off; the other blade broke. It was a wintry mix of precipitation that day.

Make sure check engine light isn't on, make sure the back is clean, accurate read gas after vehicle is returned. Make sure horn works. Generally my experience had so many issues it wasn't very dangerous driving this truck.

The staff was extremely helpful and friendly.

The customer service was terrible and they didn't even give me a receipt when I turned the truck in. So I had to go thru and investigation and a big fat headache just to get my refund. If you can use another location I recommend that. I've used Uhaul many times and never had such an awful experience!

It was disgusting and I will never rent from here again. The trucked reeked of smoke, their was a lighter sitting in the dash. Everything I was stopped I smelled something burning and it said the oil needed to be changed. Who knows how long that was on for. There were beads all over the floor. There was less gas in the tank than the paper was showing and when I did sign my paper work, good thing I've done this a few times cause the employees didn't read anything to you. I just wouldn't recommend renting here.

I understand it's a truck for moving. When you say clean and i left the truck exactly as I picked it up and then you charge me 25$ for cleaning is obscene. I didn't leave any boxes etc in the truck

The process was simple easy and quick, and I would recommend this location to anyone!