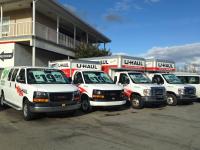 Don't rent us a broken/leaking truck.

I was asked to park the truck and that the counter person would check it in after the tended his store customers. About 2 hours later I get an email with a charge for fuel. I picked up the truck with 1/4 tank and returned at 1/4. I would have returned to the store but I was already 50 miles away. Not very good customer service on the store part and UHaul for not training the counter persons.

Don't overbook trucks and if someone books a truck verify the same day you get the reservation instead of waiting to the last minute to inconvenience the customer.

. II was told I could have the truck on a particular date. I was then told the day before I was to pick it up that no trucks were available. THIS WAS A TERRIBLE EXPERIENCE BECAUSE I HAD MANY THINGS PLANNED AROUND THIS TRUCK. I finally got one but the stress was a killer. There has to be some way that your operation is more reliable.

Apparently we were his first U Haul customer and his staff was not sure. The manage was very helpful and accommodating. It was very convenient for us to drop off the truck there.

First of all, be there when they are supposed to be there. 9 o'clock on my reservation does not mean 9:30 to 9:45, especially after us making a two-and-a-half-hour drive to get here!!!! My original pickup location was to be Hollister California at the McCrary address, but the day before we were going to take care of what we had to take care of, they said I would have to pick it up in Gilroy!!! What good is an on-line reservation when you don't accommodate the customers, but the dealers involved. The Gilroy location was a nightmare truck stop with more homeless people and animals hanging around then people working. A scary location for myself and my wife to say the least. Who sets up these locations and why aren't they taken care of better? So much for trying to be proactive with online reservation and online early check-in!! What a crock!! Maybe someone wherever this information is going to out to try and rent a U-Haul from that location and see what they think!! I can only wish them the experience that we had and will NEVER experience again. All this supposed "helpful" technology means nothing when the end result is what we experienced at the dealer. You're only saving grace was the district manager Brad who did what he could to help me, but he seemed practically impotent on what he could do. Without a doubt, the worst experience I've ever had and we'll be looking elsewhere in the future, guaranteed. From a business standpoint, the entire Hollister / Gilroy performance was embarrassing!!! This whole affair made an already emotionally draining experience that much worse, and I seriously doubt if you even care, to tell you the truth. You need to do a better job with the people working for U-Haul that have contact with the customers because it just feels like a bad joke. I will be curious to see what kind of response I get from this??

I had made reservations for pickup in Hollister at 4pm. The reservation was changed to noon in Gilroy without any notification. I was given 99 miles for travel, but that didnt compensate for the further travel back to Hollister to load the van.

I reserved a 15" truck, no one ck tacted me before my arrival, was told only 10" trucks were available. The liaison didn't look over truck, just told me to not hit his car on my way out. I later noticed contract said truck had 5/8 of a tank of gas, but the truck only had 3/8. Worst experience ever, had to take two trips from san jose to napa because of the smaller truck and ended 200+ miles over my limit. The liaison also told me I had 2 days, but later I saw on the contract he had the return time as the next.

Customer service was quick professional and conducted business in a timely manor.

Site was not prepared to check in the equipment upon return, could not close ticket and provide a record for the transaction. This is a large truck stop and none of the employees apparently have been trained on receiving Uhaul equipment. If the general manager is not on duty at the time (even during regular business hours) YOU ARE OUT OF LUCK. I will not use this location in the future and cannot recommend it to anyone.

Nothing. It was excellent!

I would have liked to have a person from the farm area inspect the truck with me. I was charge for fuel that was in the tank according to the contract I sign with the Fresno agent April. What a joke of a place. Will think about getting another rental truck from another Carrier in the future.

phone number for the contact never worked, got only voice mail, could not confirm my order, could not call when done to verify if i can bring truck back, very frustrating, and when i returned the truck, person who rented it to me was gone and i had hard time to get someone to verify mileage, gas and cleanliness of my return. not very professional, would expect much better service from you guys. do you verify people you sub your rent equipment at all?

My problem was not with the location but the 800 operator. She told us one thing and when we picked up the truck it was another. It was a major inconvenience and it turned out to be more money than I wanted to spend.

I did not select this as my pick-up point. My selected pick up point was in in Watsonville about 25 miles away. I don't recall any signage "Gilroy Farm Center". But there could have been. So much other signage I might have missed it. At this facility - shell gas station on one side, 18-wheeler gas station on the other side. Inside the facility is a convenience store and sandwiches made to order. Maybe ice cream too? Also advertised as somewhere in the building - massage. Motel on the floor above the convenience store. No UHaul counter. Someone was finally located who could assist me. We went in to the back office to complete the paperwork. I had reserved 2 dozen blankets and a furniture dolly. He did NOT know what a furniture dolly was. He said he had no blankets but we did find 5 on the way to the truck. He had no furniture dolly. Not sure how much I was charged for these blankets but it was probably too much. Once in the cab it was clear that the previous renter had a dog as there was still a good amount of dog hair stuck in various cracks and crevices of the cab. I would NEVER EVER NEVER EVER recommend this location. I'm also disappointed that UHaul would allow me to reserve items like blankets and a dolly but then not have them on hand at pick up. I'm also disappointed that you would want this pick up location to represent the UHaul brand. I won't be recommending UHaul to anyone I know.

U-Haul had everything we needed to make it an easy experience.

Don't confirm and guarantee reservations for people if you cannot follow through on them.

I was given keys and not given an instruction.