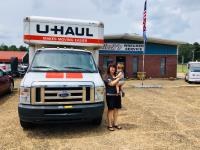 Jimmy Black has been in operation for many years and has always provided good service. I recommend anyone to them for there services!

I was to pick this trailer up in Tuscaloosa you said it was there and all was ok then you called and said no you have to drive 64 miles to another location to get it , how would you like to have to do that????

I ordered the truck on Monday to pick up Wednesday. I was told online that the truck would be at Blacks Wrecker Service on Wednesday by 9 AM. I never received a call on Tuesday like the email/website said I would to keep me updated. I tried to call Blacks Wrecker Service on Tuesday around 5, since I was informed that I would be contacted by 6:30 to ask if they knew anything about the truck and was met with a very short, â€œno, they've all gone home for the day.â€ I don't know if I was supposed to receive a call from UHAUL the company or Blacks Wrecker Service, but either way, no contact was made with me regarding where to go the next day to pick up the truck. I arrived at Blacks Wrecker Service on Wednesday morning at 9 AM and told him I had ordered a truck and he had no idea what I was talking about. So I checked online and discovered that the truck was in Winfield, 30 minutes away. No one ever got in contact with me to let me know that. Please, be sure to make contact with people if you say you are going to make contact with them. Other than that, the truck worked well and did what we needed it to. Thank you.

Give the young man a raise. He was very nice and polite !

Was supposed to get truck at 9 am didnot leave the lot till 1030am and was aked to clean coffee spilled on passenger floor before drop off.

Allow the locations accept cash. Don't charge $100 just because a customer has a prepaid debit card (your system read as gift card) because someone is less fortunate to have a checking account. Also if you I Insist release the difference as soon as possible.

When I tried to pay with my credit card the Uhaul system wouldn't take it. I checked with my credit card company and there were no issues. Whoever the lady at Black's was speaking to acknowledged the system was having issues with credit cards and referred her to some area rep instead of trying to expedite the process. After 2 hours I had to call customer service and do the order over the phone .What should have been a 15 minute process ended up taking over 2.5 hours.

Always there when we need them

I called U-Haul and it was only 5:30 pm, and no one was there except someone watching the phone, so he had to get someone else to unhook the trailer, I tried to help, but I am 100% disabled Veteran, and the helper has such a hard time doing it. When I called about dropping it off somewhere else that was closer for me, was told if I did that they would charge me. So from the beginning I asked to drop off in Tuscaloosa because it was closer to my storage area here, but they took the address on my drivers license instead, and told me I had to drop it off where they wanted.

Got what I expected and have usually received from U-Haul. Standard service, nice, friendly and accommodating. Also professional, accurate and fast.

This location was not the issue. They were great. The issue is your incompetent customer service people. They screwed up my order, and I had to drive a two hour round trip out of the way to pick up. Whoever the hell Randy is, he's an asshole. This is quite honestly the worst experience I have EVER had with a company EVER!!! I'll gladly pay extra for penske, so avoid the royal disaster that is uhaul.

Have equipment at location you rented it at.

The U Haul was not at where it was arranged to be picked up at, which was easily resolved when the owners were contacted. We were very displeased with the fact that the U Haul had not been swept out or cleaned by the previous person who had it.

The people there were very nice and treated me with respect. I really appreciated their professionalism

Had to wait for about 15 min for mrs. black to finish a phone call. I understand being tied up but others in the office May have been able to help.

The latch was rusty and did not operate smoothly.

They were great, will definitly recomend.

Dropped off trailer on a Friday night. As of Monday a lunch the trailer was still showing in my possession. Called UHaul who contacted location and confirmed trailer had been dropped off and that I would not be charged for extra days. Contract did not get closed until Thursday.

Needs to have electronic pick-up. I had to wait until they open to pick up the truck. My help had to leave by 6 PM. I was hoping to have the truck by 8 AM, but they didn't open until 9 AM then by the time I got the paperwork done and on the road it was after 9:30 AM. That cut into the packing time, by the time I drove to my final location and started unpack, I had lost some of my help. If my Sister hadn't came in from work, I would have been left to finish by myself.