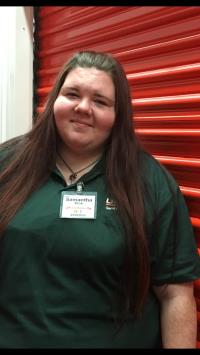 One of the best ways to make people happy is having someone meet you out side help you with unhooking the trailer and having the information pad so you don't have to go inside when you dropped off the trailer so I maybe able to go on my way . OH WATE THIS DID HAPPEN UHAUL YOU PEOPLE ROCK THANK YOU FOR DOING THIS!!!

Whatever tires are on the unit I rented suck!

The show had no been cleared off the trailer. Other trailers had been swept.

The truck was certified for release to me even though there were 4 rear tires almost worn to the max. Knowing this truck was making a trip across the country they should have replaced the tires beforehand. We ended up getting a flat tire and when the Kal Tire repair technician saw the tires he said the tires should be replaced. Four new tires were installed which allowed us to get through the snowy conditions in Northern Ontario. Otherwise we would have been stuck.

Very professional very helpful. Was in and out in minutes. Hats off to this location.

My truck was not brushed off of snow or the window scrapped of ice. The pack of furniture blankets I rented weren't even in there ( waste of money ) and the back had snow in it I had to sweep out

We arrived on a Saturday morning. So did everybody else. There were only two clerks available. It took well over half an hour just to get up to the desk to complete the rental agreement.you need more staff

Only thing l could see improved is having more then one person behind counter to speed things up.

In my opinion you guys doing great job thank you

Broken glasses was left upon receiving the truck.

The wait time to get the hitch installed was really long. That was mainly because of my battery wires. Which wasn`t a big deal because they worked really hard to find me a new wire. Then when I went to pick up the trailer there was another long wait because the wires that were installed on my hitch were malfunctioning. It ended up being fixed but was a bit annoying to be waiting almost 5 hrs each visit.

Except there is often garbage on the ground outside the building where customers park their cars. I think that should be monitored and picked up daily.

The vehicle died on me at my first stop and I had to wait an hour before being rescued. It also cost twice as much as I was quoted online due to hidden fees

found mouse shit all over our stuff in you storage

I was upset because I was suppose to pickup my uhaul at 12 but when I got there they informed me that a lot of people haven't returned the uhauls on time so I didn't have one. They did try to get me one way outside the city but that was to far to go. I ended up having to wait till 4pm to get a uhaul. I appreciate that they tried to get me one and I did end up getting on that day but it was very inconvient because I only had help for a certain amount of hours and they all had to leave.

Make sure order changes/ over the phone changes are looked after, had an issue with times not being correct after confirmed the time change over the phone a week prior, then day of it was the original time slot that didn't work, very easy and great experince using/ returning equipment

Where do I start... was â€œguaranteedâ€ a vehicle from 9am-5pm only to show up and be told I couldn't take the one I ordered until 1pm. $50 in Uber's later, I payed for my 20' truck only to find out they supplied me with a 26' truck without telling me. After pleading my case that this truck was way too big and wouldn't fit in the loading zone of my new place, I was switched to a 15' truck. The overall service was a complete joke and I would not recommend it to anyone, friend or foe.

You need to add more staff, the wait to return the trailer was unacceptable. There had to be at least 8-10 people waiting in line and one employee trying to return/rent out equipment.

The gentleman helping me on arrival and drop off was so helpful and kind. Moving js very stressful and he made my experience so much better. Thank you! I didn't get his name ...

Nothing that I can think of.

I ordered the truck 2 days before to be able to server self myself at 9:30. When I got there I had to wait and it wasn't ready until 11:05. And the pads weren't there, I had to ask for them and on top of that I am being charged for a dolly that I never rented. That delay caused one of my movers to leave because they had other commitments. It changed the whole moving process for us. Terrible experience.

I was not told about returning equipment after hours and when I called to see about it At 8:30 pm I was put on hold so long That I had the trailer dropped off and was almost home before they answered.

The vehicle was very old and not efficient on gas. All these old vehicles need to be replaced.