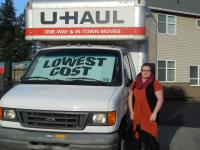 The dude behind the counter was legit....Great experience....

The assortment of vehicles is way too limited.

Great staff. Clean vehicle and store area. Will definitely use this location again.

Have an alternative to Smart Phone processing of reservations. A paper reservation turn in process would be appreciated.

Just a drop off after hours

Christina, the receptionist provided great customer service. She explained everything thoroughly and friendly. Thanks ma'am!!

I forgot her name coz I was in a rush, but I was there yesterday (Sunday March 1st), and the lady that was there was very welcoming, nice, and respectful. She has a great customer service interaction. Thank you

There was a issues with my original rental with times and dates. But the situation was handled very professionally and the man was very kind helping with me other options.

No issues at all. I will use again when needed.

Friendly staff and the equipment are utilized was in impeccable condition. I couldn't have had a better experience.

Awesome customer care! Very friendly workers and easy to find location. Would definitely recommend this Uhaul facility to others. You guys are the best! Thanks for making my move simple and convenient.

I've been a UHAUL customer since 2007. I moved from Florida to Fort Campbell, KY with one of your trucks. On the way, I had some issues, called the 1-800 number, and it was promptly resolved. Since then I've always relied on UHAUL for anything related to moving. Unfortunately, due to the lack of professionalism of one of your representative, I will no longer bring my business or ever recommend using UHAUL. On November 12 2019, I went to the location mentioned above to rent a truck and a dolly. The female representative made it happen quickly. There was just one small mistake on the receipt, she billed me for two dollies instead of one. No big deal $7 extra, she's the one that pointed it out, and said that it would be fixed. No issues so far, I'm a satisfied customer. On the 13 , I come in to return the truck, the female clerk was not there, The manager was on site. He opens the door, we great each other, I turn in the dolly, and head towards the counter. I asked him if he needed the receipt, he said no, grabbed the keys from me and told me that I could either wait or come with him to inspect the truck, I waited. He comes back, I tell him about the extra charge, he said he'll look into it. He does his thing on the computer, prints out a receipt, hands it to me, while telling me that I was going to be charged for 20 miles. I only drove 12 . I bring it to his attention, he answers in an annoyed tone, like I was a nuisance, telling me that he only puts information in the computer. as I take a closer look at the receipt, I realize that I he gave me the wrong receipt. I hand it back to him, he does his thing again, prints the right receipt with the correct mileage. I look at it and see that the $7 for the dolly was not removed. I bring it to his attention, and his answer was that the amount was correct, asked me if I knew how math worked, and handed me a calculator. As I try to respond he tells me that he could not deal with me anymore and to please leave. I asked him when the other clerk would be there, he said that he was the manager, there is nothing she could do about it and asks me to leave. I point out the double charge on the receipt, he tells me that it's accurate and kept insisting on me leaving his store if I wanted to complain to call the UHAUL number. I told him that he just lost my business over $7, (I really don't care about the money, the feeling of being ripped off and insulting my intelligence in the process, is what really infuriated me) he was fine with that. I kept my cool walked away. As I left the store I felt angered and humiliated. If that's the kind of people you want to represent your brand I can't support this type of business practice.

Nothing really. Communication was effective and overall the experience was good.

Clean facility, excellent staff - I wish I could recall the name of the young bearded fella who helped us, but he was WONDERFUL! Thank you so much. I've already referred people to you

Very friendly staff and very efficient too. Explained the charges and had truck waiting on time.

Quick and to the point. Representative was very straightforward and polite. Would come again.

None was great overall experience

This was my first time ever driving a uhaul/truck, and they didn't come out to the truck to show me anything about anything. Turns out it was pretty easy, but would have been nice if they gave a "tour" of the vehicle.

Very professional, caring and friendly staff. After the 1st uhaul I rented broke down 2 miles out from where I picked it up, i was given a replacement right away. Michelle was very nice. I called that top customer service. 100% recommend it