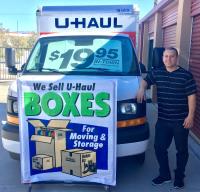 Have a clean vehicle available and make sure that you have all the additional items requested.

It's 2020. Trucks should have Ian connections for cell phone. Also satellite radio would be a plus for long haul trips

The truck was dirty and even tho I was charged for a dolly that truck was not equipped with one ,I had to go out my way to pick one at the other U-Haul store and it took my whole hour I had

Two different transactions taken Summing almost 300 dollars taken out of my account none Matching the actual amount on my receipt. Horrible experience will definitely not recommend this.

New printer- that doesn't lock up every time the employee tried to print. More staff on hand to help all the people waiting to be helped.

Was supposed to drop off in thermal. Without any warning i took truck and place was no longer available

The facility and manager were great. The problem was Uhaul. There computer system would not allow the facility to proceed with the rental. The manager had to call Uhaul who in turn directed him to someone else who wasn't there. Then back to Uhaul. Complete waste of my time and the rental manager.

Roman did a fantastic job explaining the process of the rental and storage rental. I have done business with other rentals in the Coachella Valley and found that I will always come back to this one.

Limited parking for 20ft trucks. Appropriate and convenient for my drop-off .

I ordered the truck from Indio, for reasons beyond your or my control I had to go to Coachella to pick up the truck. Very little signage and it was way out there. The personal was excellent but didn't enjoy the ride to get there. The truck worked perfect for my needs and would recommend U-Haul again.

The pick up gentleman could not have been more helpful and accommodating.

We were guaranteed by the manager we would be picking up our truck in Indio where we purchased close to 500 worth of packing supplies (we have all the receipts-made 4 trips there to purchase more). On Friday night we received a text saying our truck would be in Coachella. We called Uhaul, and they said it's just 5 miles more. The facts are there was no parking when we arrived. The representative could not keep an Internet connection (blamed Charter) and so check in took way too long because he kept getting kicked off. He claimed we had two reservations, which we did not. We had already chosen to return the truck to Carson City, but he said we had to go to Gardnerville because there wasn't a UHaul in Carson City which is not true. We didn't want to argue with him because we needed the truck to pack. When he brought the truck, the gas was not 1/2 full. He said we were looking at it from an angle. We all got in the truck one at a time and looked at the gas meter and it was clearly below the 1/2 way mark. The truck was filthy-could hardly see out the windshield. He said it was because it came from Arizona, although we were not sure how that was our concern. clearly the facility had no means to clean trucks. When we finally got out of there we were over an hour late and lost money on our packers. We called corporate for some resolution and did not receive any call back. We returned the truck a day early with a considerable amount of extra miles and clean. We have two more loads like this in the next few months, but do not want to repeat this experience and want some type of credit resolution for all our hassle.

Process took a long time, the employee stated he needed a copy of my license and credit card (claimed he was having trouble processing the payment - was told by the check out person that he shouldn't have photocopied by credit card). He ended up giving me the wrong truck than what he had entered in system. Overall frustration in requesting pick up in Indio, having to pick up in Coachella (when U-haul was just down the street), then having to pay for additional travel miles (had to go further to get the U-haul).

employee told me the trailer was in the back, he never came out to help hook up the trailer or make sure it was hooked up properly and that all lights were working. Luckily having boats and jet skis I have experience and it wasn't that big of a deal, to me.

The person at this site could not attached for me the attachement(dolly) to my truck because the man said it was too heavy for him... I being a girl did not have the strength to do it either I had to call one of my family members to help me because he(employee) said it was not his job to do it, which it actually is because anywhere I have gone in the past they offer their services and help you. On top of that after arriving and on inspection from my hubby in San diego which is a two hour drive from coachella, the attachment was not set on the truck properly which damaged my car!!!! .... Not happy with this site!!!! Worst customer service ever!

The manager Ceaser was great. He went out of his way to make us feel at ease about using a tow dolly to tow our car. He made sure we were safe. Awesome service! Thank you Ceaser.

took 3 hours to pick up truck

Ceasar was very courteous and helpful. The truck was ready when I arrived and I was on my way in no time. Drop off was just as efficient and easy. I had a friend with me when I dropped off the truck. He was surprised that I was back out the door so quickly and he didn't know about this place.

Do not rent out trucks that need maintained.

The young man in this location was excellent. Great employee. He even found something we had left on the truck. He was must helpful.

the best place to rent a truck and a storege