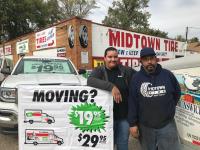 no where too park when return truck no room to move around inside did not explain a charge of 15.38 was for

Very friendly and professional experience. Fast check in, and checkout. Would definitely recommend this location for your rental needs.

I came in at 10PM and dropped off the key - I went back in the morning and saw the instructions for check-in. The app got to the step where I could add my dashboard photo. I had taken one the night before but the app did not have the option to upload it. So, I called after they opened. It took 2 more follow up phone calls to finish up the return. The woman who finished the check-in was friendly and helpful - I think they were very busy that morning.

The North Bend location was cool. But I reserved the Spring Grove Uhaul location. When I arrived to pick up my truck with a dolly, my truck was not there. I had to relocate to a different Uhaul location which was a inconvenience plus it added extra mileage to my move. I was not happy with that part of my experience. In addition I was not compensated for the inconvenience. I would appreciate a call from management regarding my bad experiences. Thank you

Nothing everything was great!!!!

Can't think of a thing.

I came to check N at 6:30p I had to wait over an hour for owner to move another uhaul truck so that I could leave the lot overly frustrating

Tommy was professional and efficient! Thanks for the great service!

More information as to the type of truck. Platform or none.

I paid for a dolly and no dolly was in the truck. I was charged $75 after turning the truck in for a dolly. I contacted Midwest Tire and they did follow up to make sure that that charge is removed and my money is refunded.

There were a lot of rental options available on site, which also limited customer parking, so I parked on the street (residential). Would not stop me from using this location in future.

I was unable to return the vehicle virtually via my phone as the link sent to me via text displayed the following error â€œSomething went wrong on our end, we've made a log of what happened and will fix the issue as soon as possible. Please try again in a few momentsâ€. I tried again multiple times but the error continued. As a result, I was charged an extra fee for not returning the vehicle correctly. Not sure what else I could of done.

Well, I was charged 10.50 for gas for traveling a total of 3 miles. I put 2.00 gas in the truck. The picture that was posted was not a representation of the amount of gas that was actually in the truck. I received it with less than what was in the picture but was unable to post a different picture. That is a scam to get extra money to me. I had already paid for 2 miles more than I actually went but was still charged 10.50 for gas. This is the second time that they have added extra charges for gas that shouldn't have been applied. It is very unprofessional as well. I gave them a second chance and will never do it again.

We rent trucks for Ministry often by far this was then worst experience. When walking in no one had on a mask and there was even a lady smoking inside the location. The truck had an awful smell and had let hair all over the floor of the truck. It was pulled up by the guy at U-Haul so he had to smell it. I had to have the truck so I drove it. I ended up driving it back (15 miles from where I was picking up food to give out to those in need) to show the guy at U-Haul he did not look at it he told me he would give me a discount when I returned the truck. Not only was no discount given I had to pay the mileage to bring the truck up to the place. When I returned the truck the young man that took it in said he smelled the truck when it came in last. Maybe this was a one off and I happened to be the one. The people at the location were nice but I rented a truck not nice people. I normally don't write bad reviews but this one was written to help the location become better. The last thing I wanted to experience was getting out of a truck to deliver food smelling like cigarettes and dog urine. If the truck was clean I would have not commented at all.

Make sure that the moving trucks are properly maintained. The truck we got was not really safe to drive. Overall my experience with U-Haul was above average.

Let us know ahead of time that you will be scanning our drivers' licenses. That was a bit much and I did not appreciate it, particularly because I had no idea who would be receiving this information. I called the 1-800 number and was on hold for an extremely long time. This caused an unnecessary amount of stress for me and the service provider. Had this not been an emergency, I would have cancelled the reservation and gone elsewhere. Cell phones DO NOT offer the type of security that would limit the chance of identity theft. I don't blame the service provider; I blame U-Haul. That was really ridiculous!